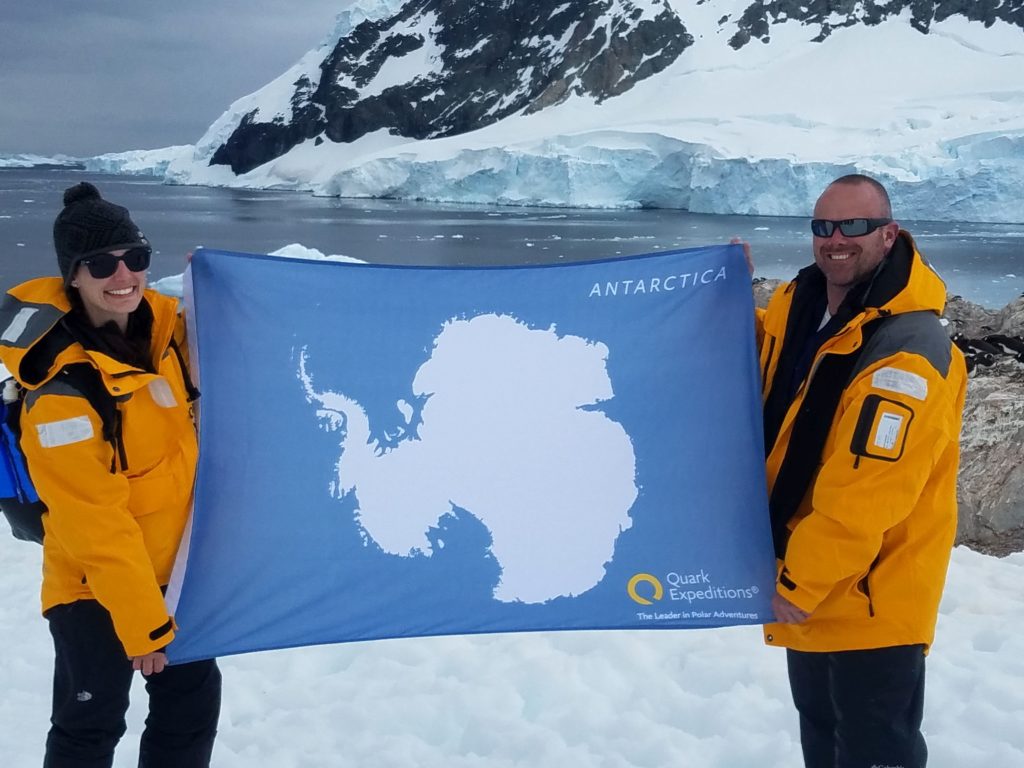 I returned last week from an epic two-week trip to Antarctica (via Chile).  Why Antarctica?  Because it was on our continent bucket list.  Both Lauren and I have been to all of the other continents in the world.  Antarctica was the last one.  So we went.

The trip started with an 11-hour flight to Santiago.  I booked an extra day on either end of the trip in the event of a scheduling problem, so we had a couple of days to explore the city.  I had previously been to Santiago about 10 years ago.  I didn’t care for it at all.  It was cloudy, smog filled, and I didn’t find the people to be very friendly.

This trip was completely different.  I loved the city.  I think part of the reason I hated Santiago 10 years ago was that I went in the winter time.  It’s a completely different city in the summer (like now).  Weather was clear and 85-90 degrees with low humidity.  It was a nice antidote to our cold Ohio winter.

The people in Santiago are quite different from what you would see in the rest of South America.  Chileans are a bit wealthier and better educated than some of their Andean counterparts.  They are also far less traditional.  The women regularly wore short shorts, bare midriff and see through shirts, and funky styles.  I saw more skin on display than any other South American city besides Rio.  Both men and women sported lots of tattoos and all kinds of crazy dyed and shaved hairstyles.  The general style trends seemed to hearken back to the early 1980s punk rock scene in America and Europe.  It was a big departure from normally conservative South America. 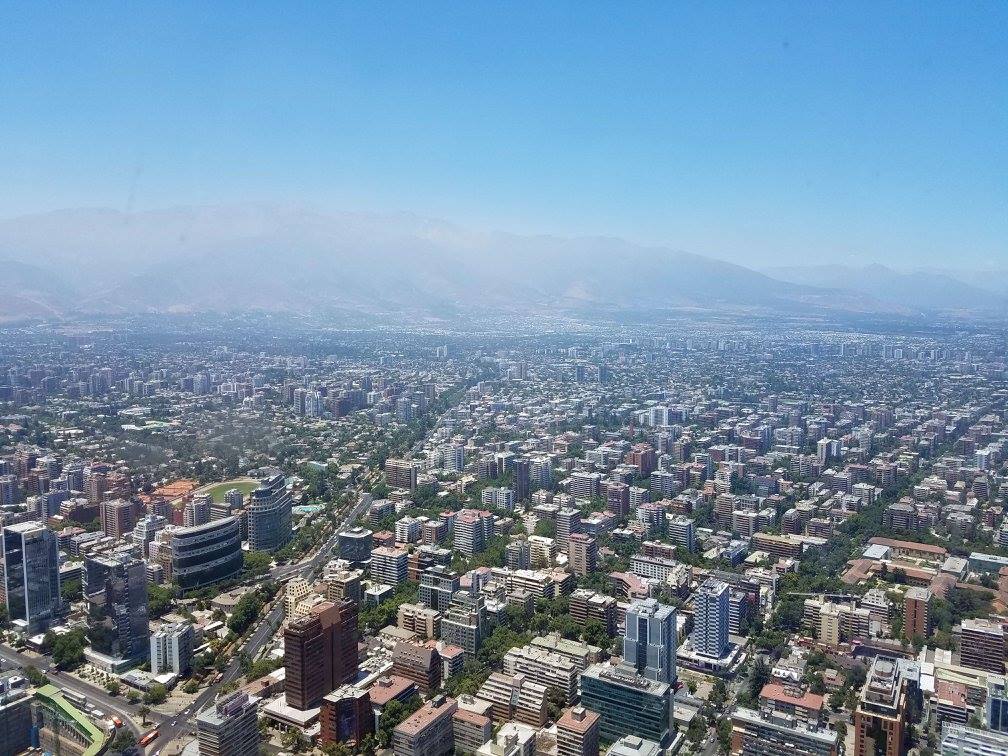 Santiago from the tallest building in Latin America

We spent time in Santiago walking the city, eating tons of good food, and hanging out in their amazing city parks.  Unlike parks in America, Chilean parks allow alcohol, grilling food, music, and unleashed dogs.  People would actually go to the parks and relax because it was a fun atmosphere.  Chileans would revolt at the idea of an American park that banned alcohol, cooking food, and loud music.  What fun is that?  We Americans can learn a lot from our southern neighbors. 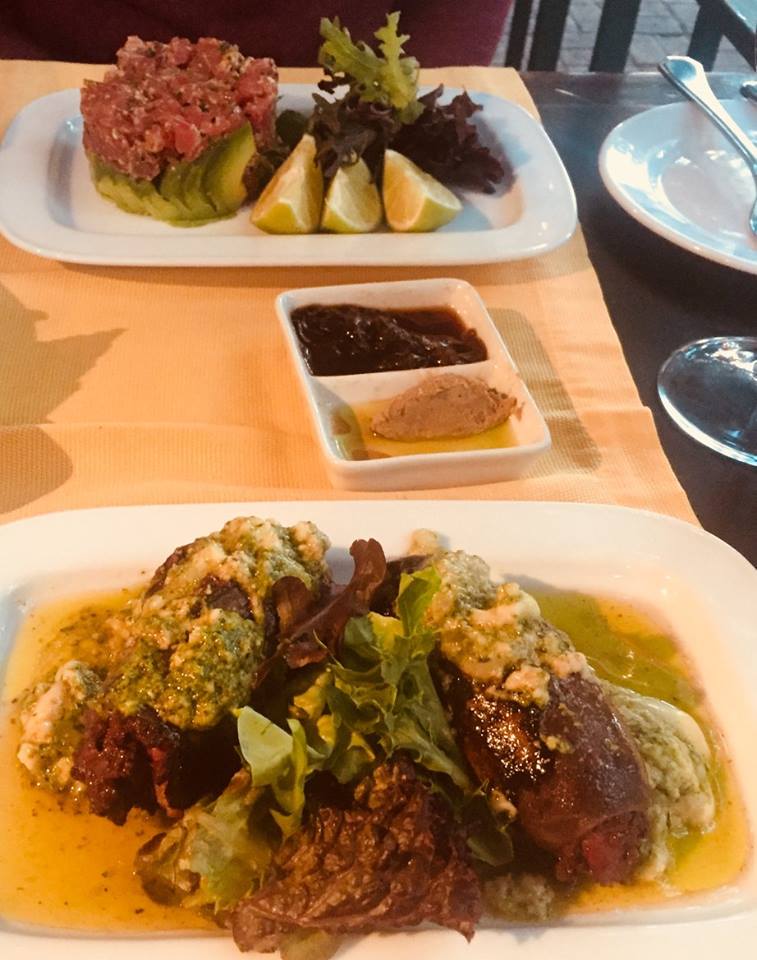 We also went on a walking tour of the coastal city of Valparaiso about an hour drive away from Santiago.  It was a colorful city filled with painted murals on all the neighborhood buildings. 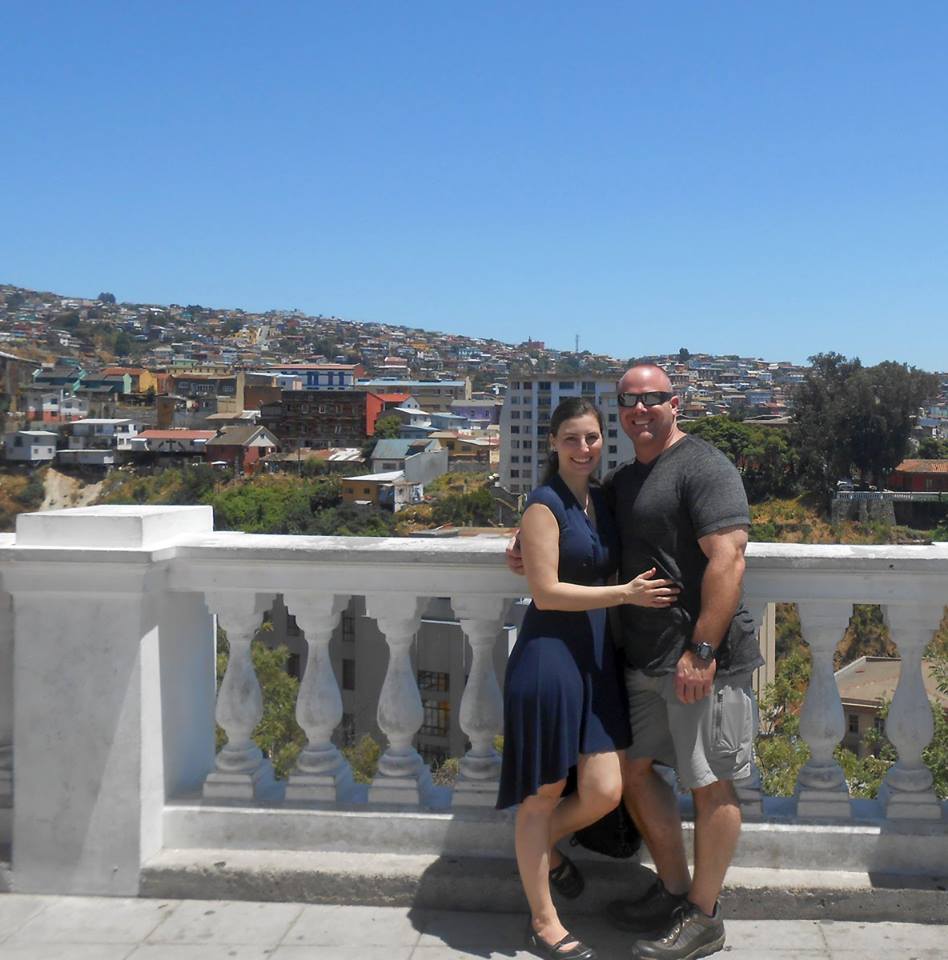 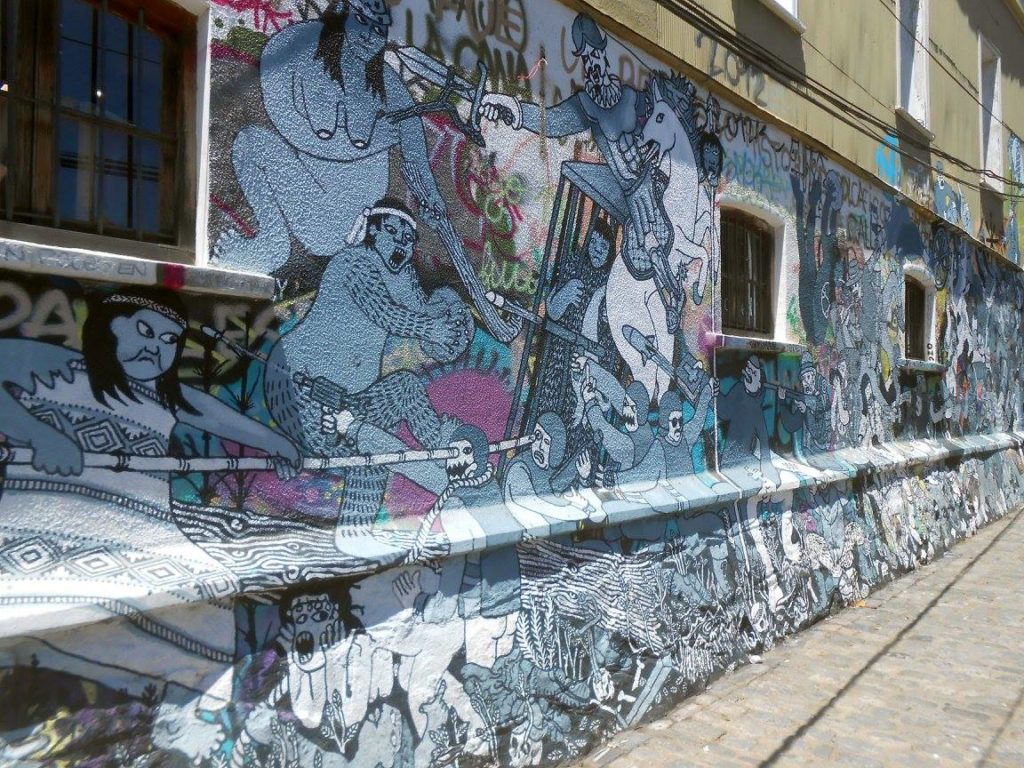 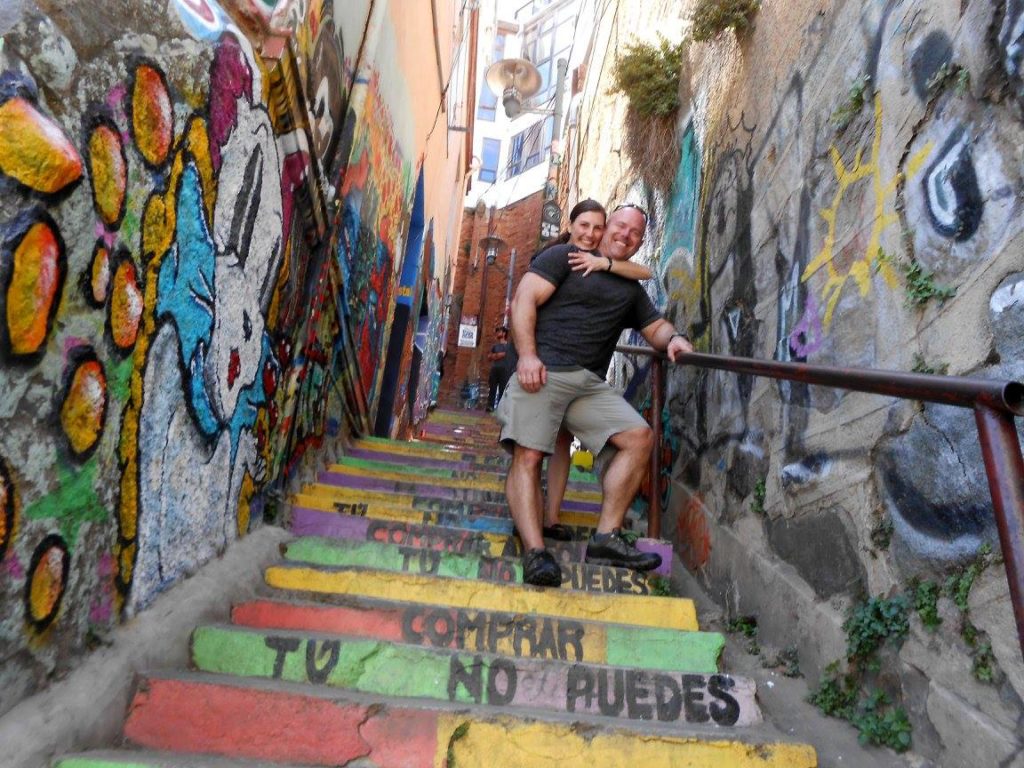 After a couple days in Santiago, we flew three hours south to the southern tip of the continent and spent a day in Punta Arenas while waiting for a flight to Antarctica.  Punta Arenas was a small coastal town and seemed to be far more relaxed than frantic Santiago.

We wandered around the town and ate at some great restaurants there.  Interestingly, the town of Punta Arenas had concrete vehicle barriers protecting all of their sidewalks and parks from vehicles.  Take a look at the photo below.  Those vehicle barriers were present in every single part of the town with high pedestrian traffic.

I find it intriguing that a sleepy little town on the southern tip of South America has solved the issue of terrorist vehicle attacks while we still fumble to protect our own citizens. 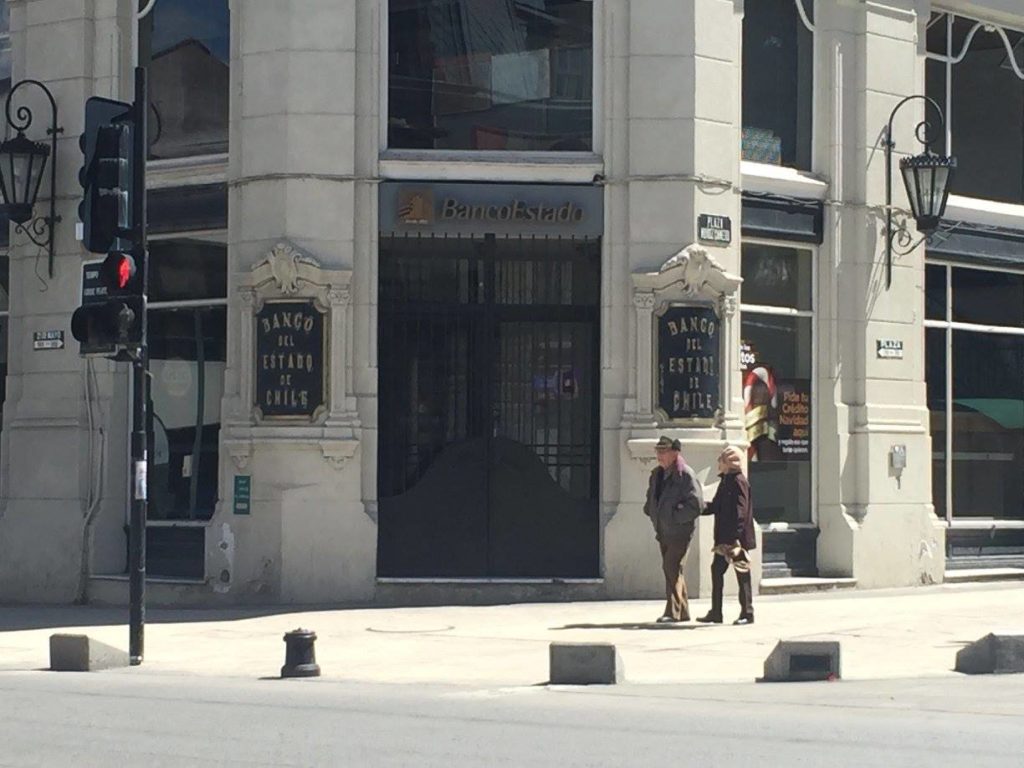 As for self protection and gun issues in Chile, there were none.  In our five days in Chile we did not see a single uniformed cop.  Not even in the airport!  I have no idea what equipment the Chilean cops use and we didn’t talk to any gun owners down there.  There was a stunning lack of violence or drama in the country.  Drivers didn’t even honk their horns.  It was all quite civilized and very different from most of the rest of the continent.

From Punta Arenas, we took a two hour flight to a Chilean Naval Base with a gravel runway on the Antarctic King George Island.  From there we boarded a 100-passenger cruise ship and boated around the Antarctic peninsula, stopping a couple times a day for land excursions.

I wasn’t quite prepared for the penguins.  The penguin colonies were literally covered in pink penguin poop.  Inches of it on every horizontal surface.  We had to walk through rivers of the stuff.  Most of the islands smelled like a chicken coop.  Not quite what I was expecting to see. 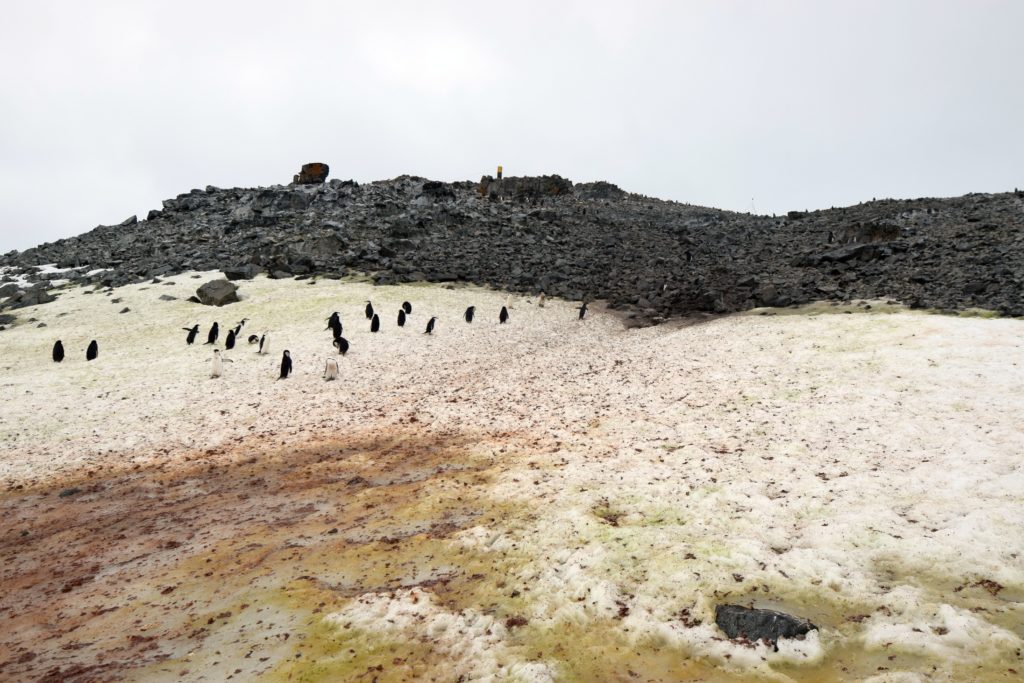 Penguins and their stinky pink and green poop 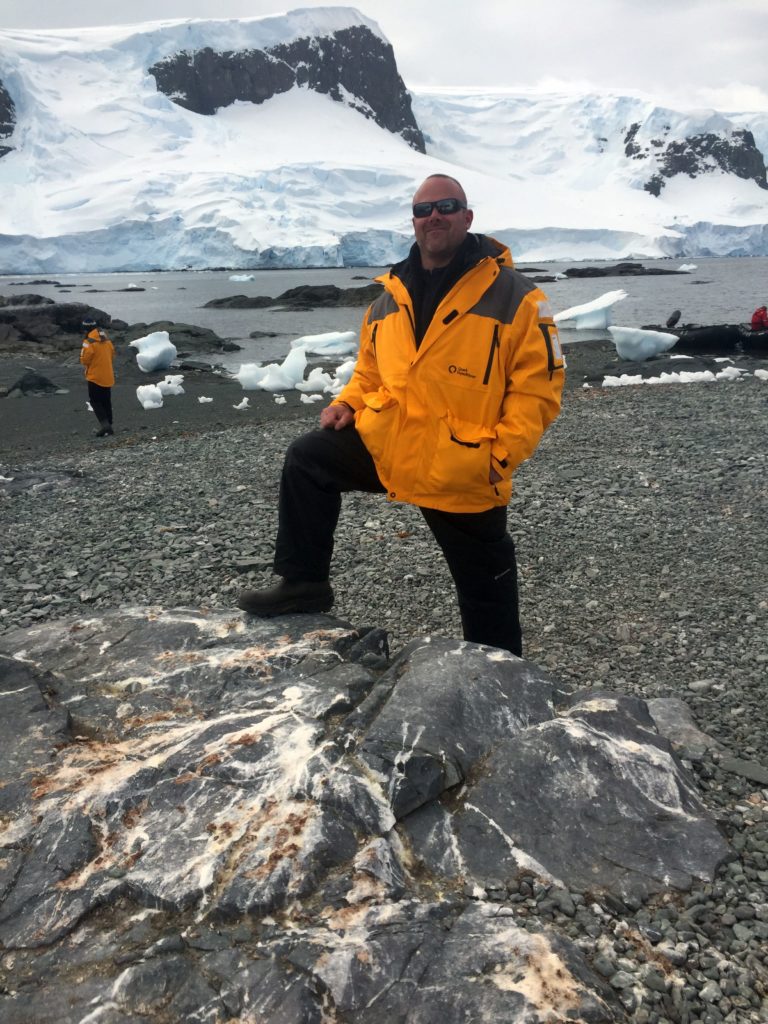 Besides the nature, we visited the Antarctic museum and a couple wildlife viewing stations.  During the five days we were there, we visited territory claimed by Chile, Argentina, Russia, and England. 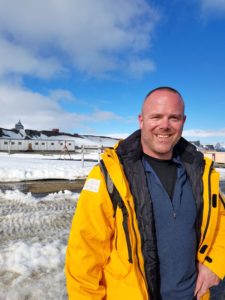 On the Russian Naval Station at King George Island 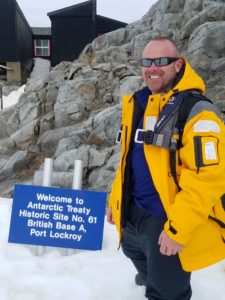 On British territory in the South Shetlands

A lot of people asked me about carrying weapons in Antarctica.  I traveled light this trip.  The cruise ship forbade weapons of any type.  Interestingly, the entire continent of Antarctica is a gun free territory.  Firearms and shooting of any type is expressly forbidden as it is a wildlife refuge.  Killing animals or frightening them with loud noises is against the international treaty governing the territory.

The only weapon I carried was a Spyderco Ark neck knife.  It was small enough to be considered a tool and is made of the same salt water resistant steel as my favorite Salt folding knives.  With the constant environmental exposure, I wanted a blade that wouldn’t rust.  It’s not huge, but is fast to access and would do a fine job if I had to stab something.  In reality, why would I need a weapon?  It’s not like I was going to get jacked by a penguin.  Thankfully, I never had to deploy the blade and had no hazardous encounters with either people or marine animals. 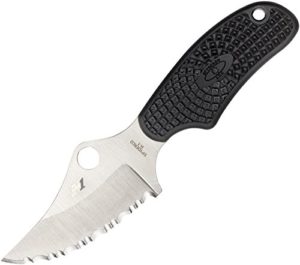 Here are a few more pictures of the landscape.  I hope you get the chance to see it someday.  Back to regular programming tomorrow. 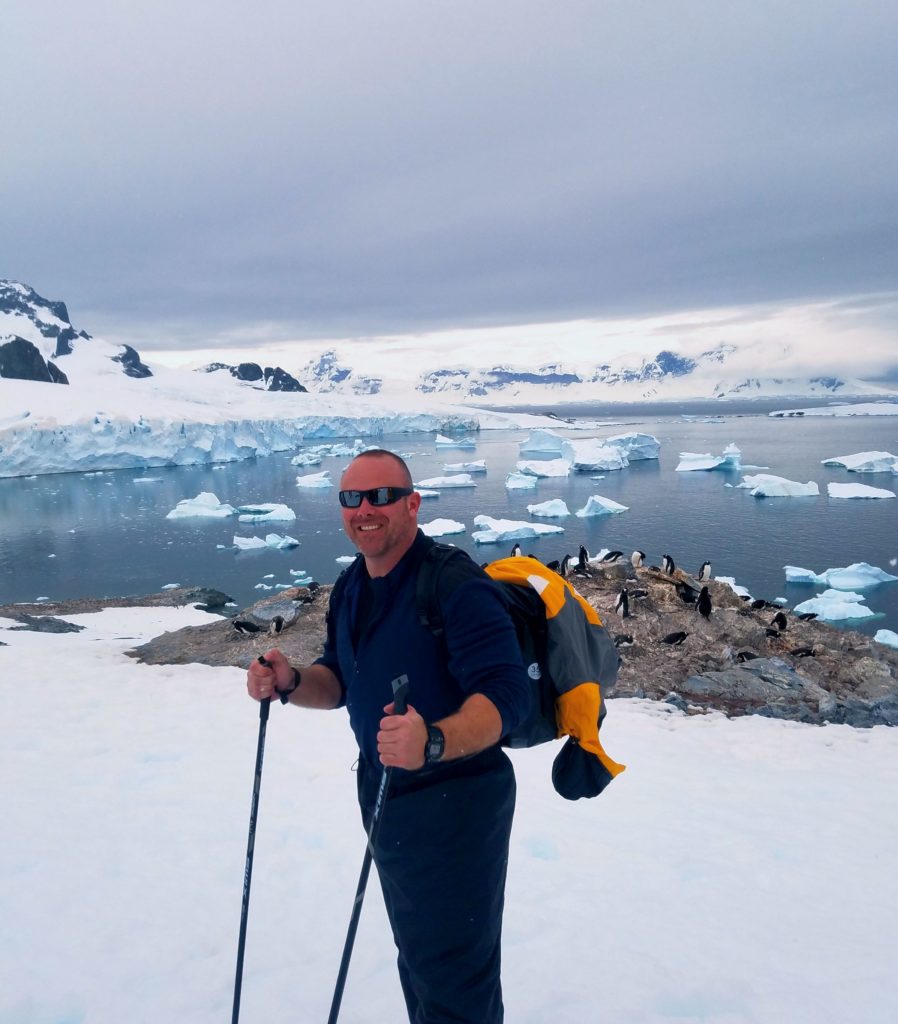 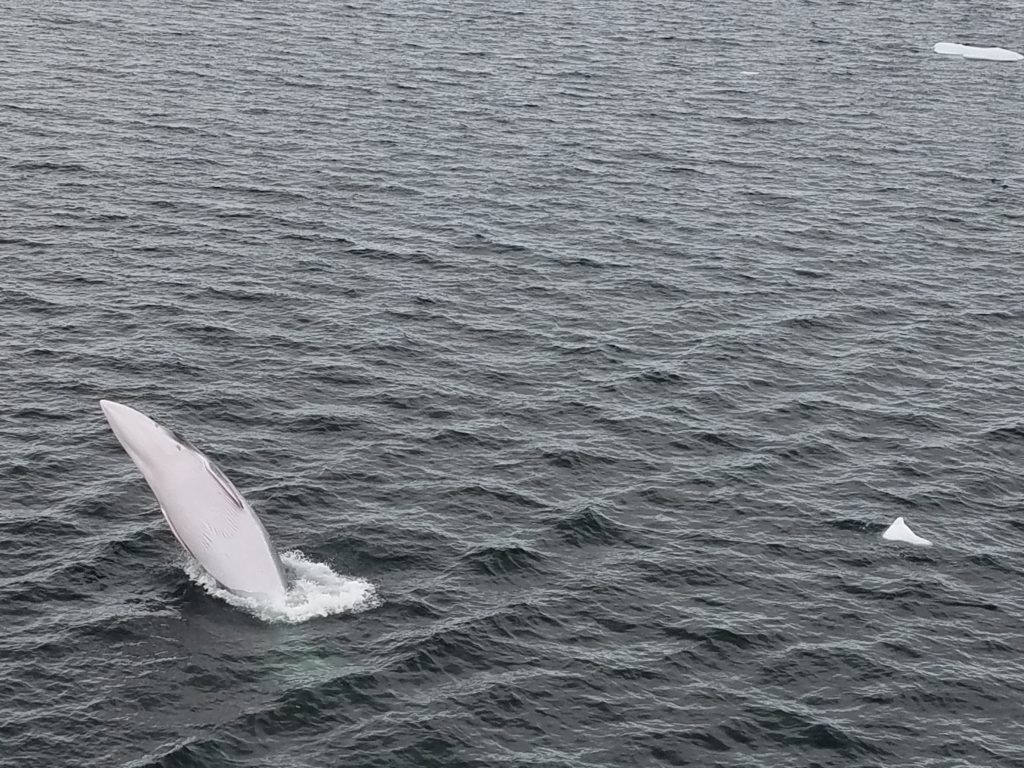 Chillin’ with a seal 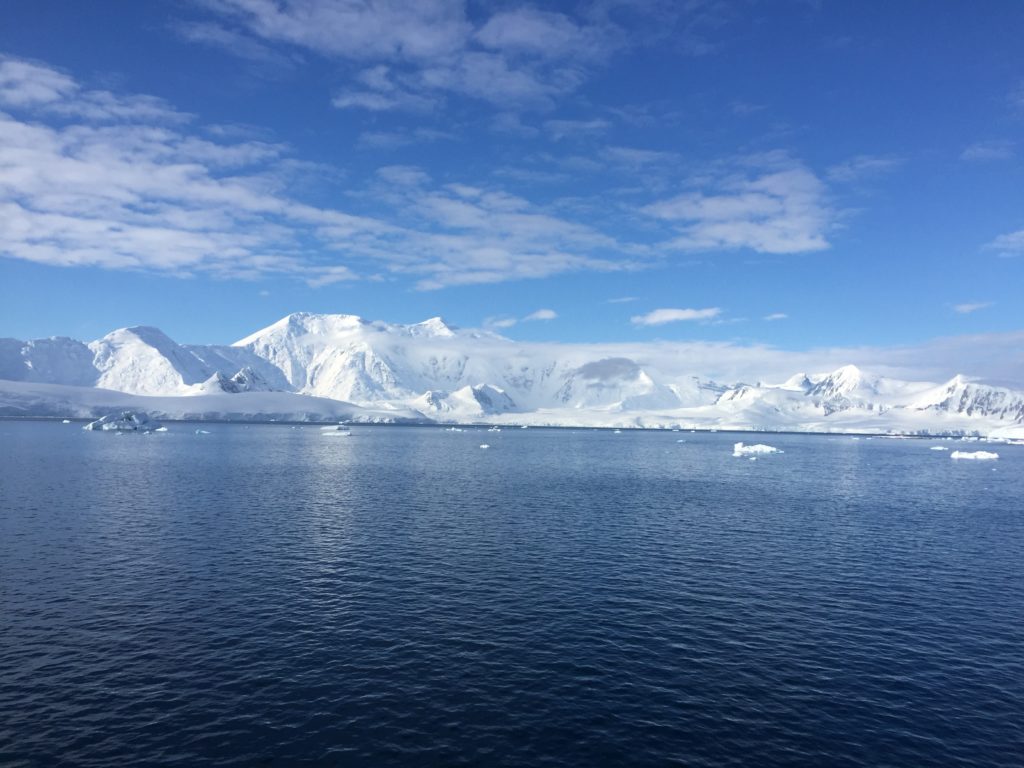 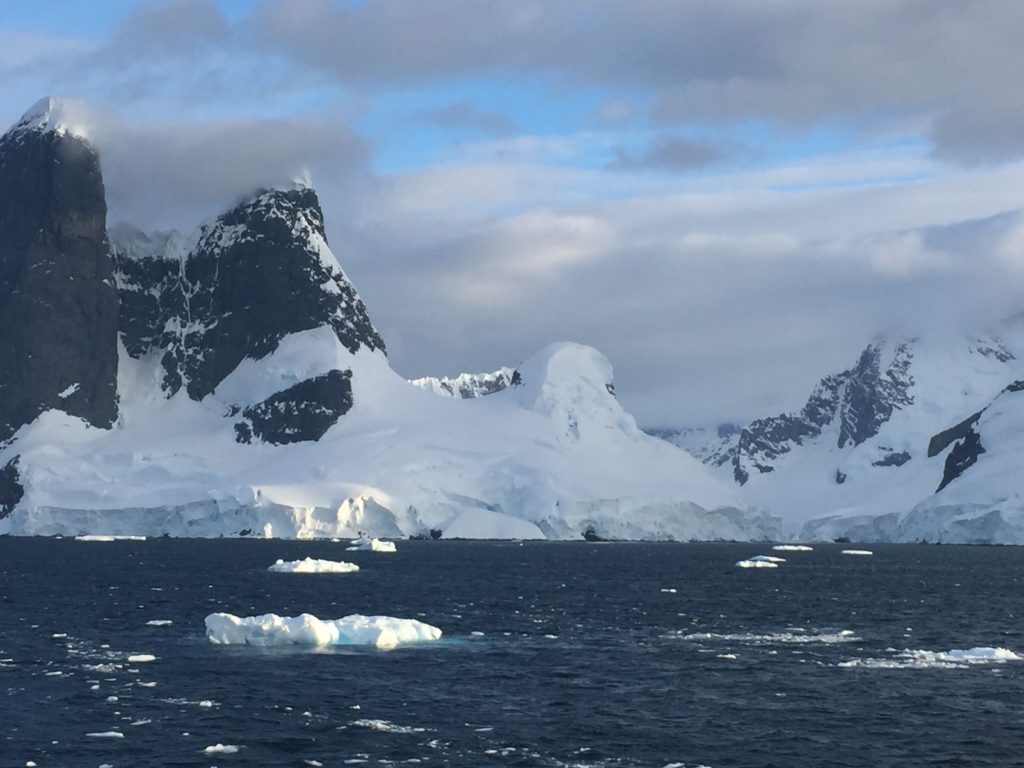 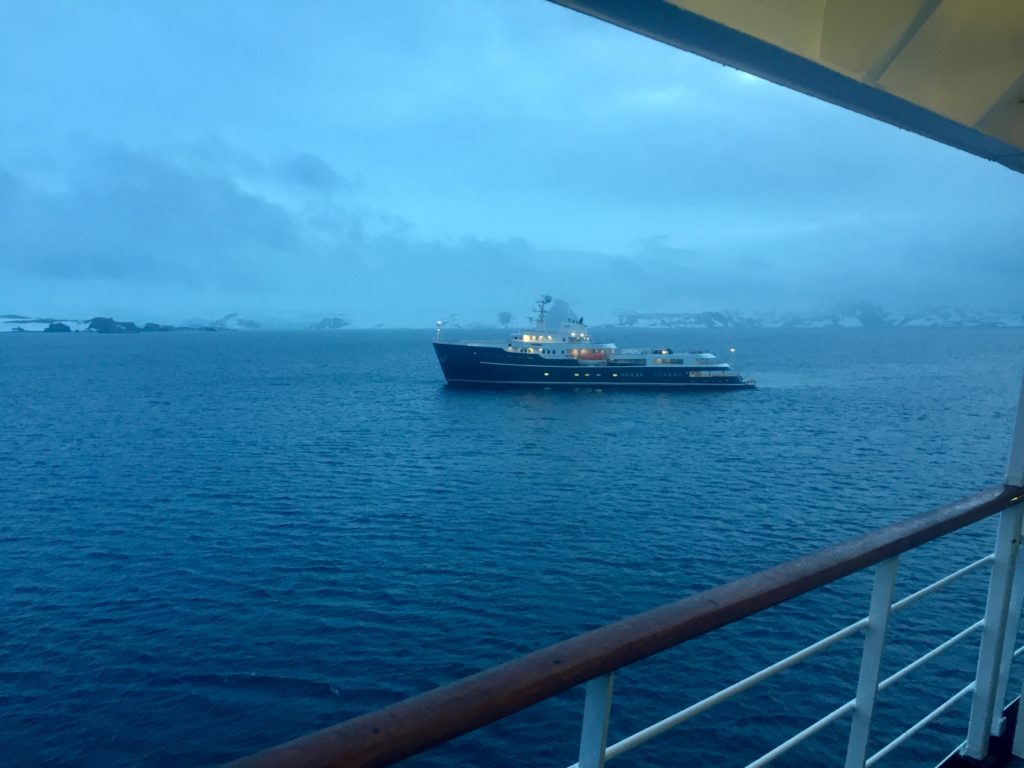 21 hours of daylight each day. This is the view from the boat deck at 2 am. This was as dark as it ever got.