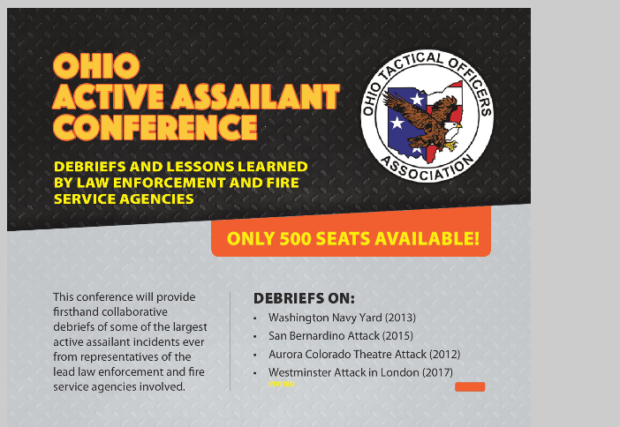 Last Friday I was happy to attend the Ohio Tactical Officers’ Association “Active Assailant Conference.”  The training consisted of lectures delivered by police officers involved in a few of the more recent notable active killer events in the United States.  Even though I was only able to attend half of the class (had to go work patrol), I thought it was very valuable and highlighted a lot of points that will improve police performance during future active killer crimes.

I got home after the conference following a busy work shift and excitedly started looking at my notes to figure out how I wanted to structure my article.  While re-reading my notes from the class, I came to a powerful realization:  I HAD PREVIOUSLY WRITTEN ABOUT EVERY SINGLE TOPIC THE SPEAKERS DISCUSSED.

This isn’t meant in any way to disparage the speakers.  They did an excellent job and I enjoyed all of their presentations.  The tips they provided, however, were tips that most police departments should already know and should have already addressed.

We discovered many of these same issues in the famed Columbine shooting in 1999.  Why haven’t we learned from these previous shootings and improved our response tactics?  It’s been almost 20 years since the Columbine attack ushered in the age of “modern” active killers.  Why haven’t police departments and schools figured this stuff out in the intervening years?

When it comes down to the basics, police active killer response is fairly simple:

-Limit the killer(s)’ victim pool by encouraging escape or lockdown (as appropriate).

-First wave of police responders each makes independent entry (prepared to breach doors if necessary) trying to find and neutralize the killer.

-Second wave of police responders shuts down roads adjacent to the facility where the crime is occurring so as to reduce the chance emergency vehicles will become blocked by parents/loved ones responding to the scene.

-Third wave of police responders teams up with paramedics to make entry to triage, evacuate, and treat the wounded from the “cold” and “warm” zones of the shooting scene.

-By now, the shooter(s) should have escaped, been captured or been killed.    Available officers conduct an organized, slow secondary search of the premises to locate evidence, additional suspects, and victims.

-Transport un-involved juvenile victims to an alternate site and release them to parents or guardians.

-Death notifications to victims’ families and well-being check of suspects’ family members (about half of active killers begin their attacks by shooting family members or intimate partners before attacking people in public areas).

It isn’t really all that complicated.  It’s certainly not easy, given the complexity of most of these shooting scenes and the resources demanded, but with adequate organization, a decent plan, and prior training, it isn’t a complicated response process.  One can argue about the relative priorities of each of these tasks and place them in slightly different order depending on the nature of the incident and the available resources, but this general plan will work well for the majority of mass killing events.

We’ve known about all these issues for almost two decades.  Why are speakers still talking about the need for traffic control at the scene of a mass shooting?  This stuff should already be trained, practiced, and documented in policy manuals.  This is NOT new information.

As I was walking out of the conference, I passed by some administrators from a nearby police department discussing what they had learned.  They were all raving about the quality of information and talking about what changes they needed to make to their active killer response plans once they got back home.  I found it amusing.  I conducted an active killer training exercise at that department in 2004.  Other de-briefers and I identified the same areas for improvement that these administrators were currently talking about.  They had the information they needed 13 years ago, but they did absolutely nothing about it!  My guess is that they won’t ever actually make the changes they were discussing.

The information is out there.  There are quite a few active killer response textbooks that police agencies and schools can reference.  On my website alone, I did a search for relevant information.  I found the following:

Articles with the term “active killer”- 154

Articles with the term “active shooter”- 135

Articles with the term “school shooting”- 55

On my website alone, I’ve written several HUNDRED articles talking about responding to active killings.  Will another summary article covering the same information be helpful?  I don’t think so.

Many police supervisors and administrators are lazy.  They don’t conduct the training they know is necessary for optimal police performance in a crisis situation.  Many school and business leaders have a “it won’t happen here” attitude and only conduct the bare minimum amount of training or drilling that is required by state law.  Very few individual cops are motivated enough to seek out active killer response training or information on their own, outside the department.  Those who do are ostracized as “paranoid.”

One police officer told me about the most recent “active shooter” training session done at his department.  A training supervisor attempted to conduct a “tabletop exercise” war-gaming police response to a fictitious school shooting.  The trainer started the exercise by posing the following question to a group of police officers and supervisors:

“Let’s say there was a shooting at the high school right now.  What would responding officers need to do?”

Not a bad question.

One supervisor in the group immediately answered: “Every one of these things is different.  All the officers would need to just respond to the scene and handle things.  You can’t figure it out in advance.”

No one else said anything.  The facilitator seemed satisfied.  That single statement formed the entirety of the most recent active shooter training provided by his employer.  That was it.  End of exercise.  Consider the officers “trained.”

I would like to say that such poorly designed police training is rare.  It is not.  Unfortunately, in my experience, training similar to what I described above is the norm and not an aberration.

Is there any wonder that police agencies struggle with the same issues over and over again?  Is there any wonder that responding cops don’t know what to do?  It isn’t a function of lack of information.  It’s a failure of police leadership to adequately prepare their officers for a critical incident. The majority of police departments charged with the responsibility of responding to active killer incidents are simply not conducting enough quality training sessions for their officers.

When this total lack of police training collides with the minimal training provided to employees of potential target locations like schools or large businesses, chaos ensues.  The killer has the advantage.  Cops and school staff fumble about until the killer is eventually  found and neutralized.  Victims die because cops were never taught how to control traffic at the event in order to get emergency vehicles to the scene.  Everyone bemoans the “tragedy.”

The cycle repeats itself.

The same cycle has been repeating for decades.  There is no resolution.  Victims die.  Cops and medics say “We did everything we could.”  Another killer strikes.  We don’t learn.

Cops go to training seminars or read websites like mine.  They present ideas to command staff.  The command staff fails to implement the suggested improvements and ignores all the lessons we’ve learned over the years.  The patrol cops don’t get adequately trained.  A shooting occurs.  Cops and medics screw up some aspects of their response.  People die unnecessarily.  Nothing changes.

Cops don’t need more information.  Most cops and administrators really don’t care enough about the issue to want to become true experts.  Despite the relative frequency of active killer attacks nationwide, most jurisdictions will go years or decades before having to respond to one.  What cops truly need is the following:

–A sensible and clearly written policy describing exactly what officers are expected to do at an active shooter scene.  The bullet point list in the article above could serve as an outline.  The policy should be written by someone in the department who is interested in the active killing topic and is current with the “best practices” of patrol response.

–Officers need to be adequately trained on the policy in a classroom learning session.  They should be taught the “why” behind each of the policy recommendations.  Realistic tabletop exercises should be used to ensure that the officers truly understand the policy objectives.

–Once officers can do it right “on paper,” departments need to schedule realistic force-on-force training sessions to test and refine the officers’ responses.  Supervisors, fire department staff, and dispatchers should eventually become involved in the training for even more realism.  Unified command between fire and police using the Incident Command System should be stressed for supervisors.

–After the officers are trained, they should be responsible for giving public presentations to schools and businesses.  Such presentations should include information about best practices for victims to utilize as well as explaining how and why police officers are responding the way they are.  Having buy-in and cooperation from school and business leaders will make police and fire response times significantly faster.  This will ultimately save lives.

The answer isn’t “more information” in the form of training seminars and written articles.  The answer is “more work” on the part of police administrators and trainers to ensure that officers receive adequate training so that they can successfully resolve challenging active killer incidents.

Honestly, I don’t know a single police agency that follows the plan I outlined above.  Every active killer training program I’ve seen has been sub-par and inadequate.

Officers often successfully neutralize active killers as a result of sheer luck combined with incredible bravery and good “gut” instincts.  Most cops are not adequately prepared to handle a spree shooting massacre.  They still respond every day and do the best they can.  This article isn’t to disparage the responding officer in the trenches who isn’t given enough training to do the job expected of him.  That officer will still step up and do his best, despite being under-trained and lacking support from his command staff.  Many times he will succeed against all odds.  Sometimes he will fail.

It’s up to department administrators to ensure that officers aren’t relying on luck to stop a killer.  The bosses and trainers need to work harder to ensure that the responding officers have a current response plan and are adequately prepared for the task at hand.  Right now, police bosses are dropping the ball.

I’m glad I saw some police administrators at this recent conference.  I only hope they have the fortitude to use the information they acquired to better prepare their police agencies for a mass shooting.  Given the fact that we are still re-learning lessons first discovered after the Texas Tower shooting in 1966 and then further documented during the school shooting epidemic we experienced in the 1990s, I’m not really hopeful that police leaders will make the substantive changes needed to truly prepare their officers for the next active killer. 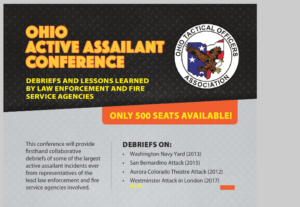 *As always, the views discussed here are not the views of either the police department or the city for which I work.  These words are not endorsed by anyone, especially anyone in a police command staff uniform.  This advice is merely the deranged rambling of a single frustrated police officer who was once tasked with the job of providing regular active killer response training for a whole bunch of cops for a whole bunch of years.  My words are mine alone and likely do not reflect the thoughts of my employer.