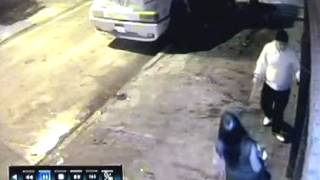 This video was originally posted by Fernando at The Modern Survivalist.  It’s a great website that I recommend.  Fernando is from Argentina and talks about living through the economic collapse that occurred in that country 10 years ago.  He has a lot of very good survival information.

He posted the video below, which shows a couple robbed at gunpoint after parking their car in Buenos Aires.  Although this robbery happened in South America, it could have just as easily happened here.  Watch the video and see how fast things develop.  The man’s pregnant wife was shot in the leg, but did not lose the baby.

Put yourself in the place of this young couple.  What would you do if you were forced to confront this horrific scenario?

Let’s look at some of the lessons learned….

1) Be very careful when entering or leaving your home.  Many robberies and home invasions take place in these “transitional” moments.  Be alert for anything out of place as you are driving up to your house.  If you see something strange, don’t go home.  Drive away and call the police.

Likewise, before you leave your house, look through the windows outside and perform a quick scan for anything out of place.  It may save you from being surprised as you open your door.

2) Work as a team.  In dangerous environments, if you are with a spouse or friend one of you should be watching for danger and prepared to take action.  Ideally the watcher should be the one who is armed.  The unarmed person in the group should be the one who performs the distracting tasks like opening the door to the house or (like in this instance) locking the garage door.  The armed “lookout” should be stationed near a piece of cover and far enough away from the other person so that a criminal would have difficulty handling both people at the same time.

This concept may be harder to accomplish without “bending” traditional gender roles.  In most married couples, if any party is armed it is usually the man.  If that is the case, the man stands lookout while the woman does the work.  It makes complete tactical sense, but it may be hard to get the spouse fully on board with the idea!

3) Be decisive.  Either resist or comply.  Half measures will get you (or your spouse in this case) hurt.  You could see by the man’s actions that he didn’t have a plan and couldn’t decide what to do.  His initial resistance wasn’t effective enough to stop the attack, but he didn’t clearly comply either.  That sends some bad messages to the criminal.  In this case it gave the bad guy time to rack the slide of his pistol, chamber a round, and shoot the wife.

Make a decision and go with it.  Dithering is dangerous!

4) If you are unarmed and fighting a person who has a gun, distance is not your friend. Criminals tend to be fairly accurate with their fire until you are more than 15 yards away from them.  Accurate criminal gunfire beyond 45 feet is rare.  Can you run 15 yards before he can fire a shot?  Chances are, you cannot.

If you can’t get to a safe location, you must get closer to the attacker.  Close the distance and get control of his weapon with both of your hands.  Once you have the weapon under control, take it from him, or strike vital targets (like the eyes and throat) to effect a release.  An even better option would be to draw your own gun and take the contact shot.  You have practiced moving in, deflecting and controlling an opponent’s gun, and then drawing and shooting from retention positions, haven’t you?

5) After the attack, get to safety.  This man spent valuable time fiddling with his cell phone to call for help after his wife was shot.  What if the bad guy had friends?  What if the bad guy decided to come back and finish the job?  Hanging out on the street is a bad decision.

After the altercation, regardless of whether you won or lost, get yourself to safety before calling for help.  This guy could have evacuated his wife to the relative safety of the house and started to treat her wounds while SHE used the phone to call for help.  That’s a much better option than remaining in hazardous territory out in the open in order to get police there a couple minutes sooner.

This is a very fast and violent attack.  It would have caught most of us off guard.  The only solution is to pre-plan your responses NOW so that if something similar happens to you the outcome will turn out more in your favor.

If you are interested in Fernando’s ideas for surviving an economic collapse, I would recommend his book The Modern Survival Manual: Surviving the Economic Collapse.  He has many valuable insights. 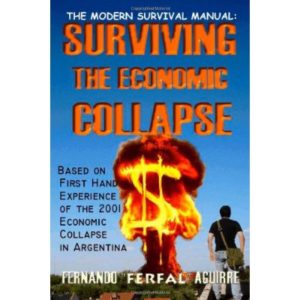