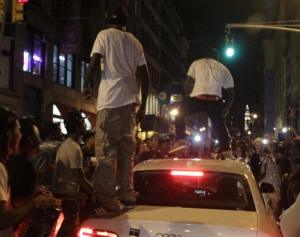 Take a look at the video below.  Watching the whole video will be useful, but if you just want  a basic idea of the events, fast forward to the three- minute mark.

The driver of the white car ends up surrounded by a crowd of people celebrating in the roadway.  The people aren’t acting exceptionally violent, but the potential for violence is clearly there.  Some verbal threats are made, a window is broken, and his car was damaged but it didn’t seem that he was ever at a risk of being drug out or seriously injured.

Imagine if you were stuck in a similar situation.  What would you do?  Take a couple minutes and watch the video.  It has adult language, mild violence, and some booty shaking, so you may not want to watch it at work or around the kids.

Did you figure out what you would do?  Here are a few things to think about…

– Avoidance is the key.  What signs should you be looking for that might let you know in advance that a dangerous crowd is forming?  Do you check out local events calendars in the areas where you live and travel to learn where and when large groups may be forming so that you can better avoid them?

– Driving away quickly is a good option.  There were several times early in the confrontation when it looked like the driver could have put the car in reverse and escaped.  Don’t let your ego get in the way of your escape plans.  Staying moving is key, but notice how the guy on the bicycle blocked the driver’s path.  If the driver would have bumped the bicyclist or another member of the crowd, things would have likely escalated.  At what point do you consider someone blocking your path to be a threat and how would you deal with it without making things worse?

– At what point would you consider the crowd’s actions to be a lethal force threat justifying the use of a firearm?  When they blocked your passage?  When they broke out your window?  What about if members of the crowd started punching you through the window?  What if they started to drag you out of the car? 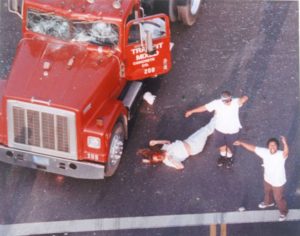 Anyone remember the L.A. riots when Reginald Denny was dragged from his truck and beaten? Don’t let this happen to you!

– If you determine lethal force is justified, would it be better to shoot your attackers, use a knife, or run them over with your car?

– Are there any situations when you should abandon the car and try to escape on foot?  When and how would you do that?

– Are there any less lethal alternative weapons that would be useful in a situation like this?

– How would your response options change if you had family members or young children in the car with you?

Every one of you will likely answer these questions differently.  There are no right or wrong answers.  Take a few moments and formulate some answers that best suit your own situation, training, and skill set.  If you need any more information about surviving mob violence, check out my article HERE.