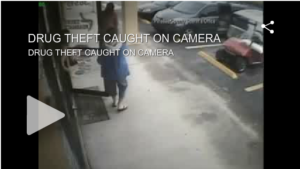 Robberies and physical attacks happen quickly.  So quickly, in fact, that we commonly hear victims say things like “I didn’t even see him.”  or “It happened so fast, I don’t remember anything!”

For an example of the extreme violence and rapidity that some attacks manifest, take a look at the short video below:

Pretty quick, huh?  I often talk to people who regularly carry CCW weapons.  In their bravado, some make statements like “If someone tries to rob me, I’ll just shoot them.”  Replay that video, gunslinger.  Do you think you could draw your gun before your head hits the concrete?  Not likely.  If you were lucky enough to get the gun out, it would be a fight OVER the gun; not the “gunfight” you imagined.

Game this scenario…what could you do to prevent it?  How would you respond if it happened to you?

Pain meds are valuable on the street. Rough street prices are $1 per milligram on Oxycodone and slightly less for Hydrocodone. That means your Vicodin/Lortab/Norco pills are worth about $5 each. Some crackhead won’t hesitate to fuck you up for that $500 bottle of pills.   It’s important to be aware of who may be watching you at the pharmacy counter when you pick up your pills.

It’s also important to keep your prescriptions hidden.  The thief knocked this woman down and went straight for her bag of pills.  If she had hidden them in her purse or in a pocket, his escape may not have happened.  The citizens who intervened would have likely captured him if there was any delays getting the pills.

I learned this lesson a few years ago in Bolivia. I was in a pharmacy buying some altitude sickness meds and started to walk out with the bag in my hand. The pharmacist had a look of horror on her face as she stopped me. She told me in Spanish to hide the bag under my shirt.  A gringo walking out of the pharmacy in a sketchy neighborhood in La Paz carrying pills is likely to get jacked. I avoided a potentially dangerous mistake due to a kind and street smart pharmacist.

This woman could have benefited from the same advice.

Besides ensuring that no one was watching her transaction and hiding her pills, this woman could have also paused for a second as she walked out the door.  If she had, she would have seen the thief standing suspiciously in the parking lot waiting for her.  If she noticed the man, she could have waited until he was gone or reported him to store staff or the police.  Either of those options would have been better than getting tackled on the sidewalk.

Be careful with those prescription pills.  Your $4 co-pay lulls you into a sense of complacency.  For some addicts, those pills are worth far more.