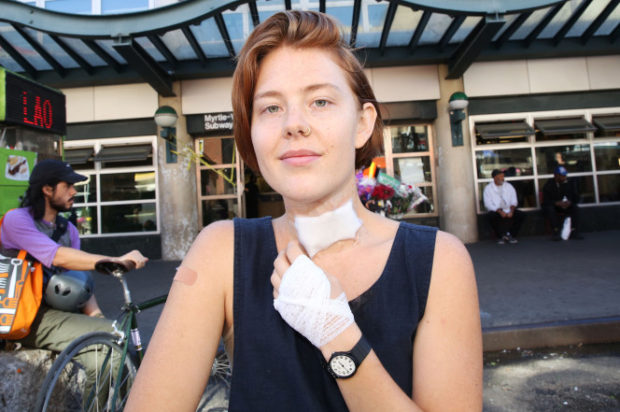 I found the article linked below.  It covers a random stabbing where an unknown man cut a woman’s throat on a busy street in New York City.  The article is quite instructive as both the attacker and victim acted predictably.  Read the short article below:

The victim made three big mistakes.  Let’s talk about them so you can learn from her misfortune.

1) Fail to Recognize Pre-Assault Indicators.  No matter what the type of street crime (assault, robbery, purse snatching, murder, kidnapping), the criminals will all perform similar actions before the attack.  Those types of actions are often called “Pre-Assault Indicators.”  There are numerous described pre-assault indicators in the crime research.  One of the most common is what I call “predatory movement patterns.”

Any movement the attacker makes that causes you to stop, corrals you into a particular path, blocks your way, or closes the distance on you is a predatory movement pattern.  Almost all attacks are preceded by one of these movements.

In this case, the predatory movement pattern is a deliberate approach in a public location.  We all have a “bubble of space” that we try to avoid entering when approaching a stranger in public.  We consciously try to give people as much space as possible in public.  Anytime someone makes a beeline approach directly toward your position, you should ready yourself for an attack.

The victim’s statement in the article was:

“He just looked like he was focused on me. There was a clear trajectory toward me.”

That’s a clear warning sign.  Be prepared to act any time you sense a deliberate approach, anyone following you or mirroring your movements from a distance, blocking your path, or limiting your escape routes.

2)Denial.  The woman had a bad feeling about her attacker.  Despite this feeling, she chose to ignore her intuition and continue on as if nothing was happening.

“[I felt] a little bit of panic…..I just thought maybe if I would ignore him, continue, I’ll be okay,” she said.

3)Relying on others for assistance.  She said:

“I was screaming, screaming. I felt that all I needed to do was to get people’s attention — that if I would call attention to it, then it would stop.”

The attack didn’t stop.  No one intervened.  The attacker stopped when he was finished cutting her throat.

You should never expect anyone to come to your aid if you are attacked.  In today’s age, more people are likely to whip out their phones and videotape your attack for a quick YouTube upload than they are to help you out.  In most cases, people will even be reluctant to call the police or to provide you with medical attention.

You are truly on your own.  You can’t depend on the police or any random bystander to help you if you are attacked.  Get this fact through your head right now.  You will only be able to depend on yourself or your close companions in the event you are attacked.  Don’t outsource your protection to some unknown random entity.

Pay attention to crimes like this.  Examine every incident for lessons to be learned.  Commit to not making the same mistakes as the victim you read about in the news. 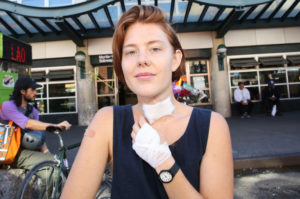