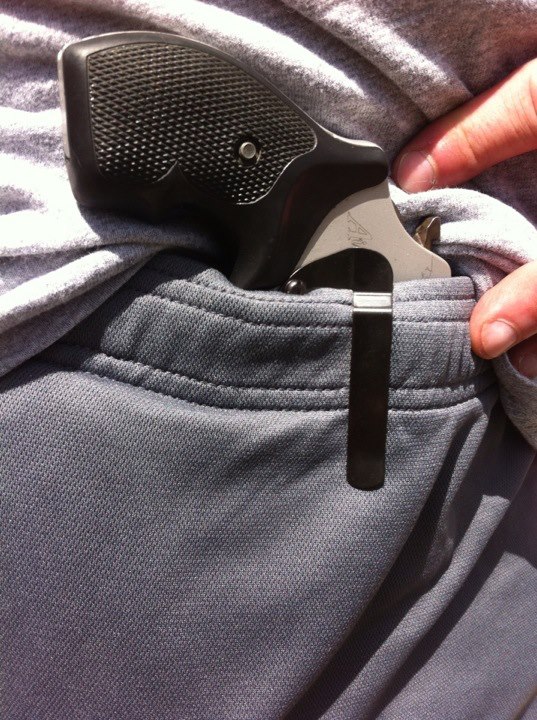 After posting yesterday’s analysis about using the .22 for self defense, I’ve decided to re-post this article that discusses some of the “how” questions that go with yesterday’s “why” questions.

I’ve recently received quite a bit of feedback on carrying and using the .22 as a self defense weapon.  I had no idea how many of you rely on the rimfire for a defense round!  There are a lot of people packing .22s out there!

I occasionally carry either my S&W 317 or 351 as self defense weapons in low threat situations…usually while working in the yard or garage.  They are light, handy, and don’t get in the way.  I recognize that they aren’t the most effective calibers for self defense, but I don’t know many criminals who will press the attack after I put eight high velocity .22 bullets in his face in two seconds.  I don’t really feel undergunned.

Wearing the 317 tucked into the waistband of running shorts with a clipdraw as I mow the grass.

With that said, I don’t often carry the .22 as my primary defensive piece.  I generally pack something a bit more substantial when I’m out in public (usually a Glock 19).  I recognize that my situation may be a little different than yours and you might be forced (or prefer) to carry something a little smaller.  I’m not the best person to advise you about carrying .22s since I seldom do it myself, but I do want to share some options with my readers….

One of the folks who contacted me after I wrote my stopping power article is a man named Henry.  Henry is 88 years old and lives by himself up on a mountain in rural Tennessee.  Like many of you, Henry has been shooting all his life.  Also like many of you, Henry carries a .22 rimfire for a primary self protection piece.  He calls it his “Old Man’s Gun.”

Henry shoots his .22 revolvers almost every day.  He’s studied gunfighting history for a long time and uses a lot of the WWII- style point shooting techniques advocated by Sykes, Fairbairn, and Applegate. Henry has logically examined all the relevant issues and made a decision that’s best for him.  He doesn’t want any attention and he recognizes what works for him may not work for everyone.  He’s an eloquent writer and wants to share his experiences with my readers.  Here are his thoughts on the subject.  You all should pay attention….

Henry’s Advice for Carrying the .22

Everybody needs to decide for themselves what works best for them. And then they need to stick with it and practice a lot so it becomes a drill. A learned response that requires no special thinking. When fear or the adrenaline rush blows your mind it will be the drill that carries you through.

The big thing about the little .22 revolvers is they are so small and light that you can carry and conceal them easily and so cheap to shoot that you will practice a lot–daily in my case. I am a great believer in the power of multiple, rapid hits in close range engagements. “Burstfire” I call it. Hit them so fast with so much fire that they are knocked off mental balance and cannot catch up until it is too late. It’s very easy to shoot fast and accurately with the little .22 revolvers because there is no noticeable recoil.

I stick to revolvers for the The Old Man’s gun because of their Reliability and Simplicity. No jams and if you get a misfire from bad ammo it does not shut you down. Just keep pulling that trigger and the next round fires. In the case of .22LR misfires, three times out of four the bad round will fire on second strike. You can keep pulling that trigger pretty fast if you want to. And there is no knocking-out-of-battery problem with revolvers if you are in close physical contact and jam them in the threat’s ribs.

So, yes, I like the little AirLite J-frame .22 revolvers and do carry one or two any time I’m out and about in stores, restaurants, anywhere in town where I’m not going to be patted down or subjected to metal detectors. Carry in the front pants pocket is safest. Can put your hand in the pocket and on the gun. Safest place for a wallet too. Anyone coming up from the side or behind you in a crowd can easily snatch a gun or wallet from a back pocket or from a belt holster unless it provides serious retention. Much more difficult for a pickpocket to snatch a gun or wallet from a front pants pocket. Any civilian carrying a gun needs to recognize how easy it would be for a snatch team to get the gun away from him. One man to jostle him or pin his arms while the other grabs the gun and disappears in the crowd. In European cities a purse snatch team often works from a motor scooter. Hit, jostle, snatch, and both men gone on the motor scooter.

Shooting Drills with the .22

Walked outside the fence and to a point about 25 feet beyond my truck this afternoon. As I do most every afternoon, weather permitting. Carrying a little Airlite S&W Model 317 .22 revolver. Border Terriers Bullet and Komegan sat at the gate watching, as they usually do. Stopped about 8 or 10 feet short of a 2 x 2 x 2 foot pit in the ground at the edge of the field. My “shot pit”. For keeping my hand in with little snubby revolvers, “the old man’s gun.”

Where did this pit come from? I shot at a leaf on the ground several years ago and was impressed by the .22LR impact in the hard red sandy clay soil. Never a tool used to widen or deepen that spot. Excavation all done about 98% with .22LR inpacts and maybe 2% from .38 Specials.

Considering the size of the pit and watching .22LR impacts in the muddy slurry at the bottom of the pit I have to believe a 317 or Smith 43c would do a good job of deterring a close range attack. Especially when I run the “Gunfighter Drill.” Four rounds of point shooting “burstfire” in the form of two fast double taps and immediately follow that with four rapid deliberates about as fast as I can pull the trigger. All bullet impacts in a 3 or 4 inch diameter circle. Burstfire to the stomach or sternum and deliberates to the sternum or head.

At least one day a week, usually Sundays, I run this same drill with the Smith 442 or 642. A little slower because of recoil of the .38 Special round in these light guns, but still pretty fast and certainly with impressive impacts in the mud of the shot pit.

Very easy for an old man to carry two of these little J-frame snubbies. Two .22s for 16 rounds without a reload. Or two .38 Specials for 10 rounds. Or one of each caliber for 13 rounds. Whatever works best for you. And as long as you practice faithfully with them and have confidence that you can shoot fast and accurately. 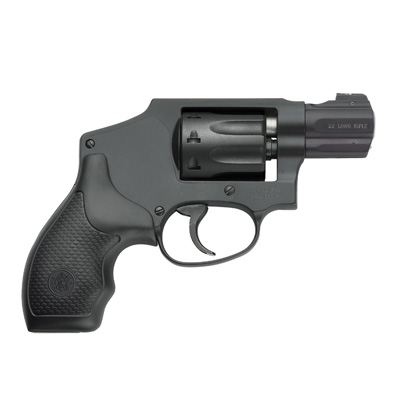 I would hate to be the criminal who had to face the firestorm of Henry’s .22 revolvers!  Even though he is a self-described “Old Man”, he’s certainly still in the game.  How many of you shoot your guns every day?  The .22 may not be the best “manstopper”, but with dedication like Henry’s it can certainly be a very effective tool.  Maybe we should stop worrying so much about the “best” gun to carry and just work on practicing with what we have every day….

I want to thank Henry, “The Old man from Tennessee” for his excellent commentary.  If my readers are interested, I’ll make Henry an occasional guest writer on the site.  I think we all could learn a few things from his experiences.