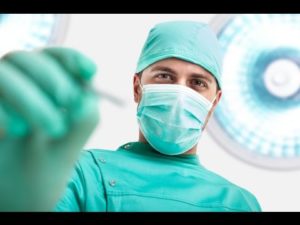 As I write this post, I am about three weeks into my recovery for a fairly major abdominal surgery.  I was under the knife for almost three hours and now have seven healing incisions in my belly.  It also required an overnight stay in the hospital.  I’m happy to say that the surgery was successful and I am healing up ahead of schedule, but I suffered quite a bit of pain and loss of mobility in the days immediately following the operation.  It altered the way I had to think about personal defense.

All of us are likely to become sick or get injured at some point in our lives.  It’s best to prepare in advance for that situation.  Here are a few things I learned after my surgery:

1) Hospital self protection issues.  The very first thing I had to cope with following surgery was my hospital stay.  It’s pretty tough to defend yourself from a hospital bed when you have IVs in each arm and are hooked up to numerous monitoring machines.

Although hospitals are fairly safe (except for the emergency room), I still wanted to be able to defend myself in the event of an unlikely attack.  The hospital was a “no guns” allowed facility.  As a cop, I can ignore those signs in my state.  I always do…except in this case.  The problem wasn’t sneaking a gun into the hospital, it was a matter of securing it while I was there.  I was in a shared recovery room with no lockable storage.  I was drugged up and sleeping quite a bit.  As I couldn’t maintain positive control of my pistol, I chose to leave it at the hotel with my girlfriend.

I did have a small knife and pepper spray that I kept in my laptop case right next to the bed.  I would have to rely on those if things got really bad.

My primary strategy was to escape.  Even immediately after surgery, I could still walk.  I wasn’t super stable, but I could move if needed.  The first thing I did was to take a (supervised) walk around the floor under the guise of getting some exercise.  I noted the elevators and exits in case I had to get away quickly.  I also noted how to disconnect my IVs and monitors in the event of an emergency.

The doctors wanted me to stay two nights after the surgery.  I chose to leave early.  Besides the constant buzzing of activity in the hospital being annoying, I would rather be in a place where I can better defend myself.  I checked out in the afternoon the day after my procedure and didn’t have any problems in the hospital itself.

2) Reducing Physical Tells- The first thing I had to confront was the walk out of the hospital and to the parking garage.  The garage was about a quarter mile away from the hospital exits and was right in the middle of the busy downtown of a large city.

I noticed that I was walking in a labored manner.  I was fatigued and bent forward.  Because of all the cuts in my abdomen, I really couldn’t stand straight up without pain.  I was walking in kind of a hunched-over manner.  Recognizing that criminals often choose victims based on gait abnormality, I forced myself to walk as normally as possible.  I slowed down so I wasn’t breathing heavily and stood straight up, even if it caused some pain.

After an injury or surgery, you probably aren’t going to walk the same for a while.  Do whatever you can to minimize any abnormalities when out in public.

3) Mindset and Involvement- While recovering, I was not as physically capable as I was before the surgery.  I couldn’t move quickly.  I couldn’t bend down and twisting motions hurt a lot.  My reactions were dulled by narcotics and the same pain meds induced a faster onset of fatigue.  I definitely didn’t want to get in any kind of physical fight in that condition.

Awareness of those factors made me truly stop and consider which situations would merit my involvement and which I should walk away from.  I had to make a mental switch.  While I usually don’t involve myself in others’ business, if I am out in public and see a cop struggling with someone, I am likely to help out.  If I see a case where someone is being seriously hurt, I would likely act as well.  Not now.

If I’m healthy, I can win most physical scraps I find myself in.  There’s a much higher chance of losing now.  I had to mentally prepare myself to ignore my initial tendency to intervene in some situations lest I become more of a liability than an asset.

4) Reducing Risks- With the same limitations in mind, I made the conscious decision to avoid any type of situation where violence was more likely to break out.  I didn’t go to any bars or festivals.  I chose to miss the Independence Day fireworks downtown.  I cancelled plans to attend an outdoor concert and avoided large groups of people.  I made a couple daytime trips to the grocery store and went out to dinner in some safe suburban restaurants.

My best chance of winning any type of fight in my condition was to avoid the fight in the first place.  I spent a lot of time at home and in very safe surroundings and saved the “risky” events until I had less pain and fewer movement restrictions.

5) Altering carrying weapons and EDC equipment.  This was a big change for me.  My normal loadout when going out in public is an appendix-carried Glock 19, spare mag, flashlight, a couple blades, a tourniquet, and usually a small hideout gun.  That changed quite a bit after my surgery.

My largest incision was exactly where I normally carry my pistol.  Any pressure on that incision site was (and still is) agonizing.  I had six more incisions in my belly running from my waistline up to my sternum.  I couldn’t take any kind of pressure on any of them.  I couldn’t wear a belt tight enough to support the weight of a full sized pistol carried anywhere on my waistline.

I couldn’t bend forward easily enough to use an ankle holster and in the 90 degree weather, I was wearing shorts anyway.  I don’t own a shoulder holster for any of my guns.  I’ve never found them comfortable or especially easy to draw from in a fight, so I don’t use them.  I needed a light gun and a different carry method.

I chose to pocket carry two Smith and Wesson Airlite titanium revolvers in the baggy front pockets of my cargo shorts, one on each side.  I carried my 351C .22 magnum in my right pocket and my 317 .22 long rifle in my left.  That gave me a weapon I could access with either hand in just about any body position I could find myself in during a fight.  The pistols were light enough that I didn’t have to tighten my belt.  With 15 rounds at hand, I didn’t feel bad about not carrying a heavy reload.

I know they are just .22s.  Remember, I’m not going to risky places or doing stupid things.  I’m not saving the world from active killers or terrorists.  The most likely defensive gun usage I might face is a random robbery in a grocery store parking lot or a burglary of my house.  I feel pretty confident in those situations with my little .22 wheel guns.  The average criminal is going to have a change of heart after I dump 7 .22 magnum rounds into his face in just over two seconds with my little “mousegun.”

With that in mind, take a look at the target from my most recent range training session. 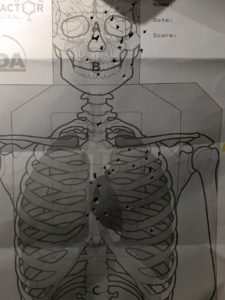 I fired 50 rounds out of the .22 magnum all at a distance of 15 yards.  I made 20 head shots and 30 body shots.  The head shots were shot in pairs from the ready position with about one second between each shot.  The body shots were fired in three round “bursts” as fast as I could pull the trigger.  I missed two out of the 50 rounds fired.  That isn’t bad from a double action .22 with big dot sights!

Using Hornady critical Defense ammunition, the rounds reliably expand to .35 caliber and penetrate 15″ of ballistic gelatin.  That’s performance on par with many .38 special loads in a gun that is lighter, has no felt recoil, and two more shots than the most .38 snubs.  I really don’t feel under-armed with that gun at all.

As I began to heal, I started carrying heavier guns.  After about 10 days, I could handle lighter weight belt carry.  I carried a Glock 42 .380 behind the hip inside the waistband until I could carry my Glock 19 again without pain.

Do you have alternate defensive carry guns that are lighter than your primary?  Do you have holsters that carry in alternate locations in case your primary carry site is damaged due to injury?  What about having holsters for your common carry weapons that are designed for opposite hand carry?  I have a few left handed holsters stashed away just in case I injure my right hand and can’t use it to draw.  If you are prudent, you might consider picking up some extra carry gear, just in case.

My surgery made me alter the methods I commonly use to protect myself.  There’s no telling when injuries or illness will occur.  It’s best to have a plan to defend yourself when it happens.