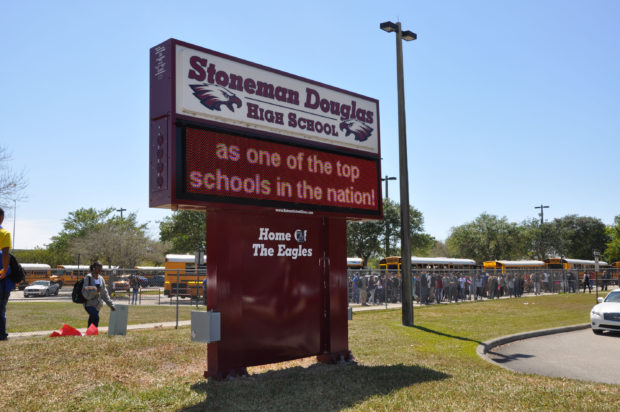 This is a guest post about the Florida school shooting tragedy from noted police trainer and active killer researcher Ron Borsch.  I think many of you will find his perspective valuable.

The Broward County Parkland Florida Marjory Stoneman-Douglas School Rapid Mass Murder© February 14th 2018, is one of the biggest news stories in nearly a half century. It was widely covered in media print, radio, Internet and television. Where does it begin? We cannot bypass the student community itself. Considering different cliques, whispering, pointing, laughing, shunning, bullying, etc. kids can be mean. Targets of social abuse are not likely to forgive and forget. A victim with genuine Numerous Unstable or Troubling Symptoms, is very dangerous.

THE MURDERER IS ALWAYS AT FAULT

It is the fault of the cowardly murderer who seemed to have nearly a life-time of acting out, displaying Numerous Unstable or Troubling Symptoms, typical of Rapid Mass Murderers. The couple who adopted him had their hands full, (dying before this incident). School professionals had numerous reports from both students and teachers who considered this peculiar teen to be a serious safety threat. Some of their concerns were reported to local and FBI authorities by students, parents and the school.

However, in the alleged wisdom of the school and other authorities including the Sheriff, had previously subscribed to a “Promise Program” where they no longer report “minor” crimes like assault to local authorities. This is a defective program that shields criminal activity from police. With a clean criminal record and no documentation clues on his mental health, this oddball could legally purchase firearms. Signatory authorities must accept responsibility for a bad program decision. They must also accept responsibility for failing to act upon student and teacher concerns soon enough before his finally being expelled. What kind of building security and staff misses this known threat carrying a long-gun case and backpack inside their facility? They will never forget the vengeful return of a rogue human murderer.

No longer an unforeseen event, professional enlightened agencies have planned and trained for this type of eventuality. Unfortunately, the previous failure factors accumulated and snowballed for making a perfect storm in the future. Local police had over three dozen visits in seven years to his home for minor affairs, placing him on their map, but no there were no serious criminal charges. Both local and FBI authorities have already acknowledged dropping the ball with available information at their disposal. As Watchmen … “they heard the alarm but ignored it, so the responsibility is theirs. If they had listened to the warning, they could have saved their lives”. Their totally “unexpected” school invasion by an assassin left them inept. Courage is a choice!

There are serious unanswered questions as to whether the SRO and other deputies on-site could not reasonably determine that gunfire was inside or outside this campus building, and exactly when a Broward County Captain forbid deputies to enter the facility. We will have to wait for Politician/Sheriff Israel to release security video, radio broadcast recordings and dispatch time-lines.

Only half of Rapid Mass Murder© incidents are ever stopped by anyone, meaning in that half, the murdering stops only when the murderer says it stops, as in this Florida example. In the half that is stopped by someone, it is on-site citizens that are the majority factor by a two-thirds majority. The remaining minority third is stopped by OFF-SITE police. What police responses work best should be well known by professional police officers. For the last several years, we have freely and widely shared the results of our Stopwatch of Death© database of Rapid Mass Murder© going back to 1975.

It appears that the Broward County Sheriffs policy reflected near best practices: “If real time intelligence exists, (gunfire), the sole deputy or a team of deputies may enter the area and/or structure to preserve life”. As many as four Broward County Deputies were on-site outside the building during gunshots but failed to take action while students were still being murdered. Coral Springs police officers arriving second as mutual aid, were astonished to see BC deputies behind cover with guns drawn staying outside. Coral Springs police officers made immediate entry at the school. They were too late, such is the rapidity of active killers.

Off-site police are severely handicapped by TIME. Without a crystal ball, they still must be notified. Very little data is available on the time delay, but Ed Sanow has estimated the typical delay in notification at 5 to 7 minutes. Our data then indicates the average live-threat beginning to end time at less than 6 minutes. To this must be added a widely variable police response time. Rapid Mass Murder© has occurred as fast as 15 seconds, astonishingly revealing that the active killer can accomplish more than one murder/attempted murder per second.

The basic math lesson here is that off-site police are not likely to arrive in time, leaving citizens YOYO©, “You’re On Your Own” for the duration. Reports on the shooting time in this Florida incident ranged between 3 and 7 minutes. Audible gunfire is a really big clue that murder is occurring and it is way past time to stop it. Depending on what the first officer does when he gets there, police arrival times could mean nothing.

As is the case in Florida, precious lifesaving time is squandered when no effective action is taken. In the past, law enforcement, not being fully aware of the Tactical Math© above, invested in multiple officer formations, or the Posse Theory©. This is where the first officer on the scene does not take any lifesaving action or Tactical Loitering© while waiting for others to arrive.

The tracking history of Rapid Mass Murder© without time-keepers, security cameras and inaccurate records all contributed to misunderstanding what police responses actually worked and which are ineffective. This means that there has been other cases where police arrived in time but failed to take lifesaving action. An analogy here is discovering the difficulty of driving square pegs into round holes and in spite of realizing the method is unlikely-to-work, continuing to try, each time expecting a different outcome.

Agencies that work smarter instead of harder, will always be more successful. Unrealistic or no training leads to an unfortunate paralysis by analysis situation of what-to-do-what-to-do? The tracking history of active killers preferred targets has been those locations where innocents are disarmed and defenseless. Educational facilities, (K-12, Colleges and Libraries), have typically been the number one target every year. That is why enlightened schools have special active threat rehearsal drills. It follows that enlightened law enforcement agencies should have frequent and recent training rehearsals incorporating the most up to date nuances specific to likely targets. Officers should also have a specific goal in mind, such as STOP THE KILLING. Peace officers, yes, but when “unexpectedly elected”, they must become guardian-warriors. Empowering literature should be made available to them such as “The Warriors Manifesto”.

Here we have presented many facets involved in this systematic failure, from student society, crisis causer, parents, schools and law enforcement. Privacy and HIPAA law aside, when an individual displays Numerous Unstable or Troubling Symptoms in an educational facility causing both students and teachers serious concern and fear, there has to be significant mental health intervention. By concealing criminality from police, this future active killer was eligible to legally purchase firearms. Schools cannot absolve themselves of responsibility to society merely by washing their hands by a mere suspension or expulsion. Turning an obviously dangerous loose cannon free without adequate intervention is criminal. Local and FBI here seemed to have too many fatal shortcomings in whatever investigations were done.

All of this is better examined with maturity, rational common sense deductions in the absence of emotion and predetermined bias to avoid over-reaction. It is a given that criminals do not obey laws. So how is it that those running off half-cocked think that the sole solution will be fixed by gun control laws?

The children who were near-victims deserve to be heard, after all many of them were witnesses to various examples of Numerous Unstable or Troubling Symptoms. Some of them reported their concerns and fears to trusted teachers and administrators, and to them, the system did not work. Adult predatory manipulation of victimized children toward their anti-gun agenda is wrong. Who paid for the fleet of white buses, lodging, meals etc. so Florida youth could demonstrate? Was it the same groups that did so for paid rioters in the past? Follow the money!

About the author: Ron Borsch had a 30 year police career including SWAT. He was given a commission to found, manage and be the lead trainer for SEALE Regional Police Training Academy that led to a second career of 17 years. His proprietary course centering on Single Officer’s Lifesaving Others© attracted officers from ten states. He has presented the course to an international audience. 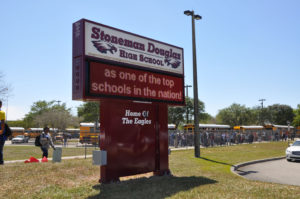