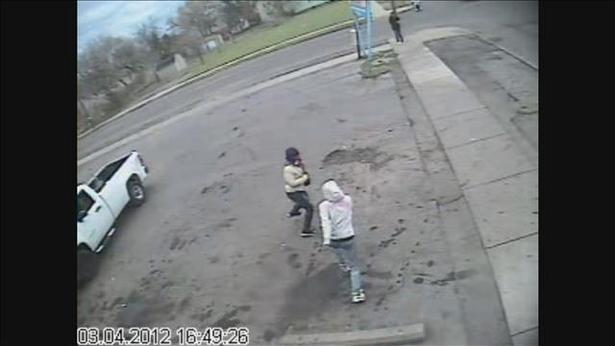 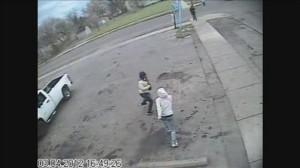 Last Tuesday, two teenage girls got in a fight outside a grocery store.  Nothing unique about that.  It happens every day.  What is unique is that one of the girls defended herself with a knife…and the entire incident was caught on video.

Stop the video at second “1”.  You see the girl in the dark jeans digging into her purse to draw her knife.  She realizes she won’t be able to get it out before her attacker closes the distance, so she starts to run as she continues to access her weapon. 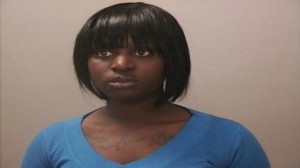 It looks like she has the knife in hand by second “3” and is struggling to open it while on the run when the girl catches up to her at second “6”.  The first contact is made and I believe the first cut is delivered around second “7”.  The attacker continues to strike and wrestle with the victim as the victims continues cutting.

By second “11” the attacker knows she is cut and breaks off the attack (bending over).  The victim uses this opportunity to run.  The attacker seems to be disabled  for about three seconds and then she stands erect and runs the opposite direction without too much difficulty.  She had been stabbed in the throat, in the left arm, and under her left breast.

It was a short altercation, but there are lots of lessons to learn from it….

What is your plan?   When I talk to most people about their responses to a violent attack, I generally hear one of two plans…“I’ll just run” or “I’ll draw my weapon and defend myself”.  For the most part, I think both groups are deluding themselves.

Just how fast can you run?  Now consider that most criminal attackers are 16-25 year old males.  Can you outrun the average 16-25 year old man?  Not many of us can.  Could you even outrun the 18-year old female attacker in this video?  If you are honest, I bet you’ll admit you can’t.  Her 17- year old victim couldn’t even outrun her.  And let’s face it, not many of us are as fast as we were when we were teenagers.  Running may not be the best option.

What about drawing your weapon?  That’s a possibility, but how quickly can you do it?  This girl got her blade out in around three seconds.  That’s actually much faster than the average person can do it.  Even with that admirable performance, an attacker can still do a lot of damage in three seconds.

Could you have drawn your weapon as you ran like this girl had to?  How many times have you practiced drawing while at a full run?  How’s that ankle holster or belly band working out for you now?  What about that little .22 mini revolver you carry deep in your pants pocket?  Here’s a newsflash: You aren’t going to be able to get to any of those weapons on a full run.  And if you stop to draw, your attacker will be all over you.  Have you ever considered that possibility?  It might be time to seek some empty hand combatives training as a bridge to give you the opportunity to draw.

The girl with the knife won this encounter, but what do you think would have happened if her attacker had been a little stronger or had a few more skills?  My guess is that her knife would have never come into play.

What about legal issues?  In order to use deadly force like a knife or gun to defend yourself, you have to reasonably believe that you are likely to be killed or seriously injured by your attacker.  Looking at the video now, do you think that the girl who used her knife was justified?  The police didn’t think so and charged her with assault, even though the other girl clearly attacked first.

When we have the time to sit back and analyze things, it looks to be somewhat clear cut.  The attacker,  even while striking or wrestling the victim, wasn’t likely to do life threatening damage.  But what do you think the girl with the knife thought?  We don’t know for sure, but you can bet her thought process wasn’t as calm and rational as ours is while we watch from the comforts of our living rooms.

Things that seem black and white  from the view of a detached observer in a classroom or courtroom rarely seem that way to the  participants involved.  Train to make decisions under stress and work to avoid situations that force you to act in a hurried or defensive manner.  John Farnam says it best: “Don’t go to stupid places, with stupid people, to do stupid things”.  There is sage wisdom in that quote!

Your weapon won’t immediately stop the attack.  This girl was stabbed in the throat, the chest, and the arm.  Two of those wounds could have been fatal.  What was her response?  She continued to fight as if nothing happened.  She fought hard for four seconds until she realized she was stabbed.  She likely stopped from the psychological shock of seeing her injuries rather than because of pain or blood loss.

What is the single most likely course of action your attacker will take after you cut or shoot him?   He will continue doing whatever he was doing before you cut or shot him.  Bullets and knives are not death rays.  Human bodies can endure lots of punishment before being taken out of the fight.

Escape as soon as possible. This girl did a great job getting away from her attacker.  As soon as she saw her opportunity, she escaped.  Don’t stand around admiring your handiwork.  Get to safety.  You see the crowd that gathers soon after the incident.  What if members of the crowd are friends or relatives of the girl she stabbed?  Don’t hang around and wait for more trouble to start!

Don’t let down your guard.  Look again at the girl who was stabbed.  She looked incapacitated for a couple of seconds and then she sprang back to life and ran away at a full sprint.  She was certainly still physically capable of  violently  attacking her opponent should she have wanted to continue the fight.  Even if your attacker is injured, he or she might not be out of the fight.  Don’t close the distance to “hold him for police”  “provide first aid” or “kick the gun out of his hand”.   You may find yourself starring in the worst horror movie you could ever imagine if your attacker comes back to life.  Get yourself to safety and call the police.  Remember Mr. Farnam’s words above…closing in on your downed attacker is one of those “stupid things” he talks about!

Ten seconds.  Ten seconds that will likely be debated and analyzed for years to come during the criminal prosecution and the inevitable civil suit.  Ten seconds that radically altered both of these girls’ lives.  Things happen fast.  Keep that in mind the next time you contemplate doing something stupid.