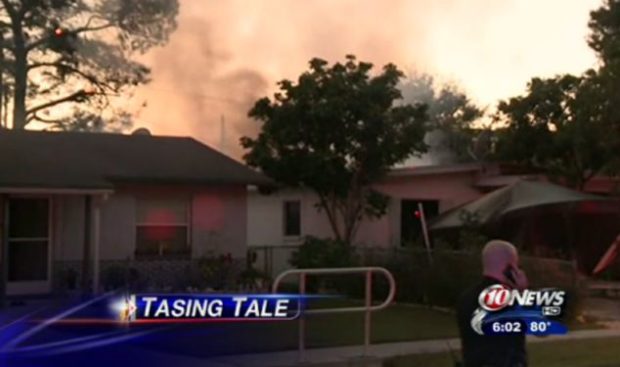 The news headline was inflammatory: “Homeowner tasered by police as he fought fire spreading from house next door”.

I came across it as I was scanning my Facebook news feed.  The story described a man who was using a garden hose to prevent a neighbor’s house fire from spreading.  The man was spraying water on his own house to keep it from catching fire.

The police arrived and, for whatever reason, ordered him to back away from the fire.  He initially complied and then, frustrated by the slow fire department response, tried to pick up the hose again.  The cops on the scene used a Taser (stun gun that fires darts attached to wires delivering a shock up to 25 feet) to stop him.

I was as outraged as the police officer friend who had linked to the story.  The supreme court has set the legal standard for use of force by police officers in America.  The force has to be “objectively reasonable” given the crime being committed.  On the face of things, the amount and type of force the officers used seemed completely unreasonable.  The man was just trying to protect his house.  He wasn’t committing a crime.

The man was complaining of being electrocuted and stating he did nothing wrong.  It seemed like an obscene abuse of authority on the part of the officers and an abjectly UNREASONABLE use of force.

I read the rest of the article and noted that there was nothing written about WHY the cops used the Taser.  There were no police statements or reports cited.  Not a single word was devoted to any other possible explanation in this incident.

That seemed a little strange to me.  Something isn’t right.  There is usually at least a token comment quoting the police.  The reporter stated that police claimed the man was a danger to himself, but provided no more details.

After seeing that, my mind immediately flashed back to an experience I had during my first year as a cop…

I was working the midnight shift and was 23 years old.  I had just graduated college, the police academy, and my department’s completely sub-par five-week long field training program.  I had a lot of certifications, but I didn’t know much of anything.

Like the cops in the article above, I was given the call to respond to a house fire.  It was the middle of the night and I could see the flames roaring as soon as I pulled onto the street.  It was the first house fire I had ever seen in my life.

As I drove closer, I recognized that the house was fully involved.  Flames were twenty feet high and covering the whole front of the house.

I was trying to figure out what I should do as I hit my overhead lights, marked on scene, and jumped out of the cruiser.  My first thought was “I hope there isn’t anyone inside!”

As I ran up to see if anyone was trapped inside, I caught my first glimpse of the homeowner.  He was standing in the front yard in his underwear, spraying the front of his house with a garden hose.   “Is there anyone still inside?” I asked.  He told me that no was in the house and that he was the only one inside when the fire started.

It was then that I noted the man’s slurring words and smelled the strong odor of stale beer on his breath.  The man was drunk out of his mind.

More disturbingly, it was at the same time that I looked into the house through the propped- open front screen door.  Three large oxygen tanks sat in the middle of the flames just inside the door.   I later learned that the homeowner had emphysema and needed supplemental oxygen to breathe.  He and I were standing about 15 feet away from the oxygen tanks. I could feel the heat of the fire on my face as the man continued to ineffectually spray his house with the small hose.

I recognized that the heat could cause the canisters to explode.  I pointed to them and told the man to drop the hose and get back.  He murmured something, but ignored my request.  I yelled at him:  “The tanks are going to blow!  We need to get out of here!”  He was too drunk to understand what I was saying.

I grabbed his shoulder and started pulling him back.  He shrugged off my hand, yelled “I’m not leaving my house!” and went right back to spraying the hose.

I was the only officer there.  The fire department had been dispatched, but had not yet arrived.  I had no idea what to do.

I remember thinking “If my house was on fire, I’d be trying to do the same thing myself, no matter if I was drunk or sober.”  I started questioning my original decision to pull him away from the dangerous flames and explosive oxygen tanks.  I knew I wouldn’t want some cop pulling me away from my burning house.

The next thought that went through my head was: “As bad as I feel about not allowing this man to save his house, I’d feel worse if he got blown up because I didn’t do anything when I could have.”

It was one of the first real dilemmas I ever remember experiencing on the job.  All of this was flashing through my mind in just a couple seconds.  I wasn’t sure of myself, but had to make a decision.  The guy was drunk and didn’t understand the danger he was in.  I had to get him to safety.

I grabbed one of his arms and started to pull him away.  He fought back, twisting and pulling with all of his drunken might.  I pulled harder.  We started moving backwards, but not fast enough.  I started getting worried about my own safety as I was wrestling this guy in his front yard while his house burned.  “When are those tanks going to blow?” was running through my mind.

I knew I couldn’t engage in this struggle for long before we both got hurt.  I pulled out my handcuffs and wrenched the man’s arms behind his back as he yelled out in pain.  As I was getting the cuffs on, a second officer arrived on scene.  That officer was even younger than I was and went through my same academy class.

I pointed to the oxygen tanks and yelled at the officer “We have to get this guy out of here!”  The other officer immediately understood and the two of us picked the man up and drug him to safety.  The fire trucks were just starting to pull up and all the neighbors were coming outside.

The homeowner was yelling “I was just trying to save my house!” as we drug him back behind the cover of my police cruiser.  I remember the disparaging looks on all of the neighbors’ faces as I dragged their friend away from his own burning house.  They didn’t see the oxygen tanks.  They didn’t know that their normally rational neighbor was shit-faced drunk.  All they knew was that a couple of very young cops were preventing their neighbor from saving his own house from a raging inferno.

As I tried to calm the homeowner down, I could hear all the neighbors criticizing us for our actions.  I wanted to explain what had happened, but I was too busy with the drunk homeowner to give them the explanation they deserved.

In the end, the fire department got the blaze under control and the oxygen tanks didn’t blow up.  When the homeowner finally calmed down a bit, I let him out of the handcuffs and got him a blanket.  We called a friend to come pick him up and we didn’t charge him with any crime.  He was still angry with us for preventing him from saving his house, but he never filed a complaint and I never heard from him again.

There was no police report filed.  No supervisors were called.  I doubt anyone on the department even remembers that it happened.

Even though it was more than 20 years ago, I think about that night fairly often.

I’ve always wondered if I made the right call.  I’ve run through every bit of mental gymnastics possible trying to justify what I did.  I still don’t know what I really should have done.  I’m glad that the man wasn’t hurt and I feel good about keeping him safe.  But I also realize that the tanks never actually blew up.  Maybe even in his drunken state he knew more about the true dangers than I did.  Maybe he could have stopped the flames and lessened the damage to his house.  I’ll never know. 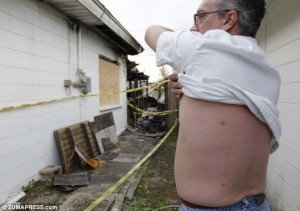 The marks left by the Taser darts…

Fast forward to present.  I see these officers being criticized by the public for using a Taser in a similar situation.  It certainly does seem unreasonable given the news account.

But I wasn’t there. Neither were any of the critics.  We don’t know the officer’s justification because we haven’t heard his side of the story.

All I know is that I was on the pointy edge of some criticism for doing something similar many years ago.  Just like today, the critics didn’t know the full story.

I’m certainly not a police apologist.  I think the incident should be investigated and the officer should face the appropriate discipline if the investigation determines he used force  unreasonably.  But I also think people shouldn’t rush to judgement.  The outrage may not be appropriate.

Just like the oxygen tanks complicated my decision to stop a man from spraying water on his burning house, there could be complicating factors in this case.  We  just don’t know enough to make that call.  Welcome to the world of police work.