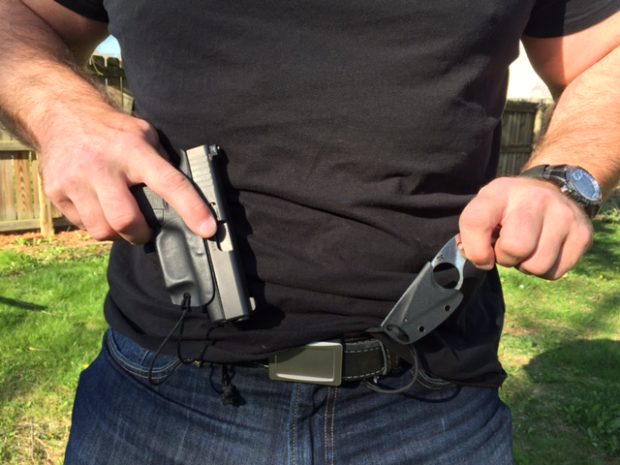 Last weekend I enjoyed the days off from my police and teaching jobs by going to a couple of concerts.  I really enjoy seeing live music, but I don’t enjoy the “security” ordeals at most live music venues.  One of the venues I attended did patdown searches.  The other used a wand metal detector.  No weapons allowed.  No exceptions…not even for sworn police officers.

That presented me with a dilemma.  While state law allows me to carry into both venues, I would be denied entrance if a weapon was found on my person during the searches.  I wasn’t breaking the law by entering with a firearm, but I would be violating the venue’s policies and would be kicked out of the show.

Locations like these, where one is legally able to carry a weapon, but is denied that right by a company policy are often referred to as being “Non-Permissive Environments.”  Some of you no doubt have experience with such locations.  Many times the non-permissive environment is the firearm owner’s workplace.  Workers in high paying careers don’t want to take the chance of losing their employment if they carry a weapon against company policy.

There is another option.  One can carry a weapon into these locations without consequences so long as he is not caught!  Alternate tactics and carry methods must be employed, but it is entirely possible to pull off with just a little effort and some good bluffing abilities.  I wasn’t about to attend a concert surrounded by 10,000 drunken fans without having the ability to protect myself and my girlfriend.  In order to be armed, I had to carry in such a way that my weapons wouldn’t be detected by security.  I’m happy to say that I attended both events armed with both a gun and a couple knives.

I used the same basic setup for both locations.  My deep cover concealment weapons of choice were a Glock 42 .380 handgun and a Fred Perrin designed “La Griffe” fixed blade knife.  I chose the pistol because it was small enough to hide, but still shoots like a “real” gun.  Even though I have smaller .380 autos, I shoot the Glock with much more speed and accuracy.  If I have to take a shot in a crowded concert venue, I need all the accuracy I can muster.

I chose the La Griffe because it is a very handy fixed blade.  As I didn’t carry spare magazines out of fear they would be detected by the security guards, I needed an additional backup weapon in the event that my gun ran out of bullets.  Anyone who knows anything at all about knives will tell you that they would much rather fight with a fixed blade than a folder.  Another useful advantage of that particular knife is that it is extremely flat.  Flatness provides the user with many more concealment options.

I also carried one of the Ka-Bar Last Ditch knives (LDK) that I designed as literally a last ditch defensive measure.  It also gave me an additional weapon I could use to arm my girlfriend should we get involved in a truly serious situation.  I carried the last ditch in my wallet.

Once I made it through security, I placed both weapons into my waistband by creating “slip sheath” holsters using the Perrin’s kydex sheath and a Glock Tech MIC holster.  Both the holster and sheath are attached to the belt with thin black cord.  When either weapon is drawn, the sheath or holster is pulled clear from the weapon as soon as the cord reaches its maximum length.  See the photos below for an illustration. 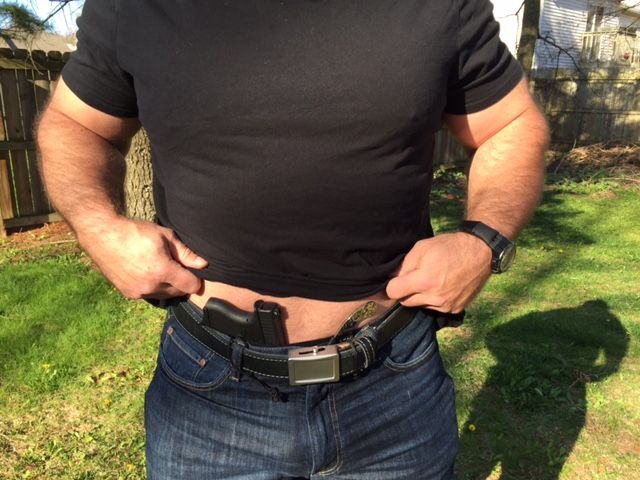 Final carry location for both weapons 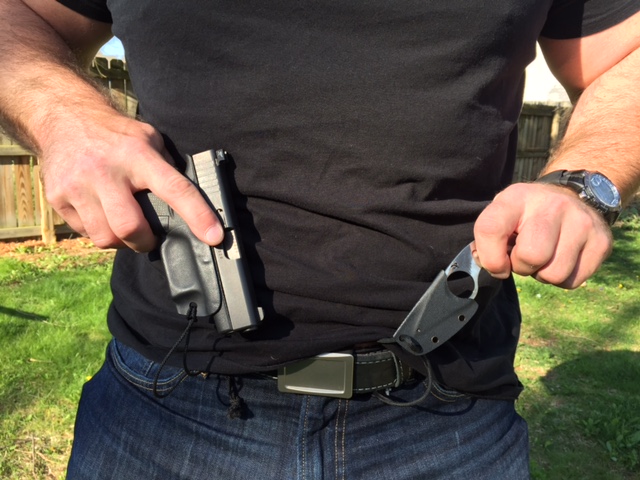 As the weapons are drawn, the sheath/holster pops off as soon as the string is fully extended

Before placing the weapons where I ultimately wanted to carry them, I had to get through security.  That involved slightly different tactics for each venue.

The first venue did pat down searches and looked inside any purses or bags the fans were trying to bring in.  Knowing that the “security” staff would not touch anywhere close to my groin made concealment options very straight forward.  I attached both cords to the front of my belt (matching belt color with cord color so the cords go unnoticed in a dark environment).  I shoved both weapons down below my belt line in my front groin area.  Here’s what it looked like with the weapons hidden away. 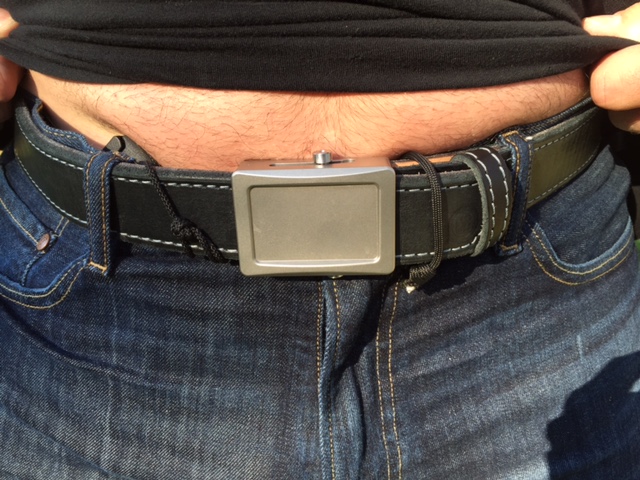 Weapons shoved down in the front of my pants

I left the cords visible in this picture so you can see exactly where I placed them.  You can also see a hint of the butt of the pistol in the appendix carry position just above the waistband.  When I went through security, I tucked the pistol even deeper and slid the cords laterally so that they were mostly hidden by my belt loops.

I walked up to security, lifted my shirt and allowed the officer to do his brief pat down.  As expected, he stayed away from my groin area and I breezed right through.  The security guard felt my wallet briefly but did not move it and the LDK went undetected.  In retrospect, I could have probably hidden something like a Ruger LCP or my Browning Baby .25 in a pocket holster behind my wallet.  I doubt it would have been noticed.

As soon as I cleared security, I went into a bathroom stall, removed the weapons from their hiding places, and replaced them in a position where I could access them more quickly.

If you are expecting a pat down search from security guards, you should be safe to hide your weapons in the groin area (for either sex) and around the breasts (usually in a bra) if you are female.  An $8/hour security guard is going to make sure he doesn’t touch anyone in those areas.

If you are worried about the cords giving you away, there is another option.  You can use the same set up, but instead of attaching the cords to the belt, you could place both gun and knife in the protective cup pocket of an athletic supporter.  I use the McDavid brand boxer brief style athletic supporter.  It looks just like normal underwear but has a pocket in the front for a groin-protecting plastic cup.  Remove the cup and place your weapons in the pocket.  That places them directly in front of the male genitalia and they won’t likely be found by a rapid or casual pat down.  Once you clear security, go to the bathroom, dig out your weapons, and place them in a more accessible location.

I knew from previous experience that the second concert venue used wand metal detectors (but no pat downs) to screen the entering patrons.  I changed up my tactics a little bit for this contingency.

I placed the gun similarly to what I did the night before, but kept it higher up, just below my belt buckle.  You’ll notice that I chose a belt buckle that had the most possible metal in the photos.  That was the one I was wearing when I went to the concert with metal detectors.  When the security guard wanded the front of my body, the detector went off…exactly as expected when the detector is placed in close proximity to a large metal belt buckle.  I lifted my shirt so he could see the buckle.  When the alarm sounded, he already expected it and attributed the alert to the belt buckle instead of the gun stashed just underneath it.  The rule is: “show security what they expect to see.”  The guard expected that his wand would go off when passed over a large metal belt buckle.  It’s up to me to use this expectation to my advantage when I conceal my weapons.

I placed the knife under the insole of a shoe.  I’ve never seen anyone using wand metal detectors actually make the person they are screening lift up the soles of their feet so that area can be wanded.  Most won’t even bend far enough down to scan below knee level because the bending action action gets tiring when done 1000 times a night.  The shoe knife didn’t set off the alarm.  The very flat profile of the blade I chose made shoe carry effortless.

I still had the LDK in my wallet.  I put the wallet behind my cell phone in my back pocket.  When the guard heard the buzzing sound in the vicinity of my back pocket, I pulled out my phone and said “that’s just my phone.”  He was happy with the answer and I again slid painlessly past security.

When dealing with wand metal detectors, placing items very high (like taped to the chest) or very low (like in a shoe) often causes the items to go unnoticed.  Ladies can stash things in an underwire bra and blame it on the support wiring when the detector signals.  Each of these is a strategy I’ve used or seen used successfully dozens of times.

When dealing with a walk through metal detector, these tactics won’t work.  In the event that I have to go through one of those, I will carry my ceramic Talonz knife  (after replacing the metal dog tag chain with a short piece of paracord) or my G-10 composite copy of the same Fred Perrin knife I mentioned earlier.  Neither of these are detectable by any metal detectors.

I would urge anyone trying to carry plastic, ceramic, or composite knives through a metal detector to verify that they are truly metal free.  Some companies insert a small amount of metal in the blades or handles just so people can’t sneak them through metal detectors.  Pick up a portable metal detecting wand.  The ones most security officers use are fairly cheap.  You can pick one of those up for less than $25 on Amazon.com (affiliate links).  Better safe than sorry.

I hope this article gave you some useful options.  Fair warning, by doing the things that I wrote about, you are placing yourself at some risk if you screw things up and get caught.  It might mean being escorted out of a facility with orders never to return.  It might mean getting fired.  It might end up getting you thrown in the back of a cop car.  It’s “big boy rules” when utilizing these techniques.  Don’t try anything stupid that will lead to your arrest.  Don’t use these things when criminal charges if you get caught are inevitable.  Be smart and stay out of jail.

Don’t carry a weapon in any place where you are prohibited by law from doing so.  Use these techniques only in places where it is LEGAL, but against company policy, to carry a weapon.

One other thing to keep in mind.  It was EASY for me to get weapons into a “secured” venue.  I could have very easily taken more or larger weapons.  Do you think that an active killer or terrorist couldn’t do the same thing?  Don’t think you are “safe” because there is a rent-a-cop with a metal detector at the front door of the event you are attending.