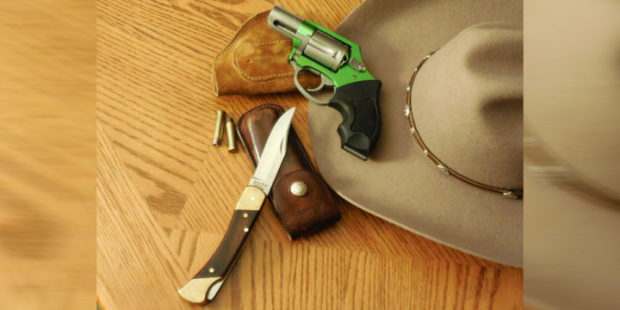 While most of the gun/holster combinations featured are completely adequate, some are less than ideal.  When I see some of these sub-optimal choices, I will highlight them here, telling my readers why I think that they should be making better choices.  I’m going to call my series #DON’TDIGTHERIG

Today’s installation can be seen HERE.  It consists of a reader’s Charter Arms .38 revolver, a suede IWB holster, and a lockback knife carried in a belt sheath.  The reader describes his CCW gear as follows:

“I carry my Charter Arms Undercover Lite chambered in .38 special in a Vega suede leather holster & an old Schrade Uncle Henry knife that was my grandfathers. I changed the hammer to a spur less double action hammer & the small combat grips both from charter arms. I love the reliability of the revolver & this one has a great trigger. The holster has a moveable and removable clip that makes it so I can use it to open carry on my belt, carry inside the waist, or remove the clip & pocket carry.”

Let’s talk about this choice a bit….

First of all, let’s talk about Charter Arms revolvers.  In my experience, these guns are very clearly second tier in terms of defensive revolvers.  They simply do not work as smoothly or reliably as a quality weapon from either Smith and Wesson or Ruger.

In fact, four years’ worth of this manufacturer’s revolvers are under recall from one large retailer.  All manufacturers occasionally make lemons and all of them have recalls.  What worries me the most about this particular recall is that it took four years to recognize the problem!  That’s not acceptable!  Think about all the guns that people have been relying on for personal protection all those years without knowing that their guns may not function correctly.  Quite simply, I would not choose a Charter Arms gun as a defensive piece.  If cost is a consideration, a used Smith or Ruger will make a far better defensive choice than a new Charter Arms revolver.

I’ve had a few students bring the guns to class and a couple of officers on my department carry them as backup guns.  I’ve found that parts breakage is more common, accuracy is not as good, and triggers seem much heavier than the comparable Smith and Wesson revolvers.  The police department I work for also had three of the Charter revolvers that we seized from criminals.  I turned them into role playing Simunitions weapons for training.  All three broke after relatively light and occasional use for force on force training.  I would stay away from using a Charter Arms revolver for self defense.

Beyond the issue of the manufacturer, carrying any .38 snub (especially without spare ammunition) is a very optimistic choice for a defensive piece.  I love snub revolvers and own about 20 of them, but I rarely carry one as my primary weapon when out in public.  The .38 snub works well for a single-attacker scenario that takes place at close range.  In any other kind of attack, the little .38 may not be enough to get the job done.  You may only be at risk of a single bad guy at close range.  If that’s the case, carry your snub.  Most of us recognize that multiple attackers and longer range encounters are either possible or likely.  In those cases, the snub doesn’t work nearly as well for the average shooter.

Now that I’ve pissed off all the Charter Arms owners, let’s talk about the holster.  Multi-purpose (both IWB and OWB) holsters usually suck.  Suede holsters are not ideal for IWB carry.  The suede is too soft.  The mouth collapses after drawing the gun and it is nearly impossible to reholster without muzzling your weak hand (that has to hold the holster mouth open in order to reholster).  The soft suede also allows the trigger to be pulled from the outside of the holster.  It isn’t common, but it has happened.  Don’t carry suede holsters.

Holsters like this that use the same clip for both inside and outside the waistband carry usually fail to properly maintain the gun during fighting or vigorous physical activity.  Simple spring steel belt clips are inadequate to secure the gun to the outside of the waistband.  The holster will fall off fairly easily.  Besides that, the soft suede is not boned in any way to retain the handgun in a struggle.  Bottom line, it’s a bad defensive choice.  The holster is too likely to fall off the belt using this kind of clip.  The gun will not be retained against an aggressive gun grab.  Don’t buy a “multipurpose” holster.  Don’t buy a suede holster for either IWB or belt carry.

Equipment isn’t the most important factor in winning your defensive encounter.  With that said, you don’t want to intentionally diminish your performance by using bad gear.  It’s hard enough to win a gunfight when everything goes well.  It’s a lot harder when you have sub optimal guns and holsters.