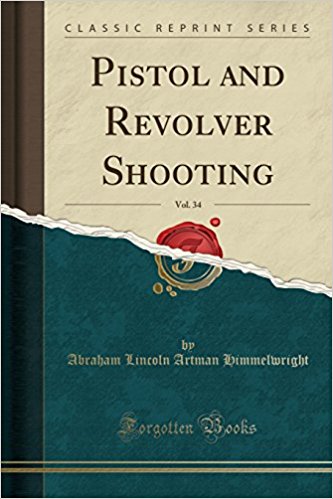 I am constantly reminded of the saying that “If you want to learn something new, read an old book.”  I was recently re-reading the 1935 edition of Pistol and Revolver Shooting by A.L.A. Himmelwright and found some very useful ideas.

I often complain that the firearms shooting skill levels of both cops and concealed weapons carriers are not up to par.  Apparently, this isn’t a new condition.  Himmelwright was astonished at the poor marksmanship displayed by police officers 85 years ago.  In his book, he laid out a training plan to remedy the situation.  I think his suggestions are just as useful today as they were back in 1935.

Himmelwright’s goal was to turn every man into a competent shooter.  He defined a “safe and reliable shot of good ability” as a person who can “hit an object the size of a man every time at 50 paces.”  That’s fairly decent shooting.  I’d be happy if my fellow cops or CCW students could hit a man-sized silhouette 100% of the time at 50 yards.  Some of my police students have trouble hitting the same target at 50 FEET.

The author says that with the right training program, it is possible to get every officer to this level of ability after one year of training.  Let’s look at what he suggests….

Himmelwright believed that the goal of imparting good marksmanship training began with the firearms instructors themselves.  He advocated a training program for new instructors that involved a structured apprenticeship program with an already successful police firearms teacher.  Himmelwright suggests that:

“each of these men should devote not less than four hours per week to this course.  In four months’ time, these men should be qualified to undertake the work of training and instructing others under the inspection and supervision of the original teacher.”

That course of instruction totals 64 hours over a four month period.  More importantly, it is one-on-one tutalage from an advanced instructor. I think that a personalized individual period of instruction from a master teacher of that length would probably be perfectly suitable to “certify” a new instructor.

When we consider that most police firearms instructor classes are around one week in length and consist of lowest common denominator training in a classroom with dozens of other students, Himmelwright’s program seems superior.  It’s most certainly vastly superior to the weekend NRA instructor classes that many CCW instructors attend.

I’ve mentioned it in conversations with other instructors before, but I really believe a structured training internship program is the best way to become a quality instructor.  Teaching lots of students side-by-side with a master instructor is how most of the top notch firearms instructors in the world learned their craft.  Sadly, the opportunity to do this type of training is hard to come by.  An “internship” with a well known instructor is something I find almost universally lacking in poor firearms instructors, either in the law enforcement or civilian world.

I didn’t learn my teaching skills from my state’s police firearms instructor certification course.  I learned how to teach working the line as a junior instructor at the Tactical Defense Institute helping dozens of students every weekend and learning from the senior instructors who taught with me.  My friends who are some of the best firearms instructors in the world learned the same way at similar shooting schools or under the tutelage of senior police or military shooting instructors.

Without a good instructor, we won’t have good students.  That’s a big problem in the police training field.  State certification classes seldom turn out quality instructors.

After the instructors are trained, they are responsible for training up the other members of the police department.  According to Himmelwright:

“The mistake is sometimes made of requiring men to practice during their off duty time; this has never proved successful.”

Amen, Mr. Himmelwright.  Very few cops will take their own time to seek training or even to practice their skills.  If we want cops to be competent, we have to mandate that they train during the time they are on duty and getting paid.  It’s a sad, but true, fact that remains especially important in today’s world.  I would estimate that fewer than 10% of my coworkers seek outside firearms training or practice on their own time.

Himmelwright’s plan is to have the officers train with the newly certified instructors:

“devoting not less than two hours per man, per week (for one year) to this work.  At least one and one half hours of this time should be devoted to actual practice shooting.”

The average cop in the United States currently gets about eight hours of firearms training a year, usually all in a single day.  Most cops shoot one to three times a year depending on department and assignment.  It’s clearly not enough.  Could you imagine the improvement we would see if we increased training from eight hours a year to 104 hours per year?  Weekly shooting is required to anchor this new skill set.

Two hours a week for a year would likely turn a lot of cops into master marksmen.  Two hours of structured practice a week for an entire year will put the average CCW shooter in the top 5% of his shooting peers in terms of skill level.  It’s an admirable, but remarkably achievable goal.

The training program doesn’t end there.  To maintain abilities, Himmelwright suggests that:

“the efficiency of the men can be preserved and maintained by devoting an hour of practice every two weeks to regulation practice.”

Does anyone think that this program couldn’t help but increase skill levels?  Why isn’t anyone implementing such a program?  It’s not like this is a new idea.  The author proposed it in 1935!

I think Himmelwright is correct when he says:

“There is little doubt that the cost of the time and ammunition devoted to such a course of training would be more than offset by the elimination of a large portion of the accidents, litigation, etc., that result under the present conditions.”

I doubt we will ever see police agencies adopt a practice program of this intensity.  But that doesn’t mean you can’t do something similar.  I challenge my police and CCW students to give Himmelwright’s program a try.  Get at least two hours of structured firearms practice every week for a year.  The skills you will obtain with such a practice regimen will truly change your life.  Give it a try.