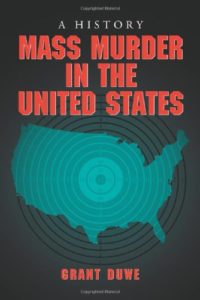 “Research on the content of crime news has long shown that the news media misrepresent the social reality of crime.  Although news organizations are obligated to inform the public, they are also compelled to generate revenue, for they are businesses whose primary purpose is to create a profit….In an effort to make crime news more entertaining, and thus more appealing to consumers, the news media over represent violent interpersonal crimes because they are dramatic, tragic, and rare in occurrence.”– Grant Duwe

I recently finished Grant Duwe’s book Mass Murder in the United States.  The book is a decade-by-decade account of all of the mass murders occurring in America during the 20th century.  It is a fine review of the topic and belongs in the library of anyone concerned with mass murderers, spree killers, and active shooters.  As an account of the history of mass killing, the book has no equals.

One chapter, however, stood out above the others for me.  It was a chapter that analyzed how the media reports mass murders.  I’ve long known that the media is biased, but I had no idea how bad the problem really is.  Some findings detailed in the book:

– The number of murder victims strongly correlates with how often and how long a news story is reported.  While most murders in the USA have a single victim, those murders with a larger body count get a disproportionately high rate of news coverage.

– Most murders are NOT covered by the news media.  Depending on the study cited 40%-83% of the total mass homicides didn’t get a single minute of news coverage, either local or national.  What murders get reported?  Those murders having white offenders, white victims, female victims, and elderly victims.  Crimes committed by or against young black men weren’t as likely to be considered “newsworthy.”

– The New York Times reported on 59% of the 909 mass killings that occurred in the USA during the 20th century.  The number of stories devoted to each killing has been dramatically increasing.  In the early part of the century, each reported killing averaged 1.67 stories.  In the period from 1965-1999, each reported killing garnered an average of 6.36 stories per killing.  Coverage of mass murders is now 3x that of what was seen in the country before 1965.

– Mass murders are 3.38 times more likely to be reported if the offender used a gun as compared to other methods (fire, automobiles, knives, etc.)

– Murders where the killer knew his victims and murders during the commission of another felony crime make up the bulk of murders in the United States.  The New York Times was less likely to report these incidents than murders that occurred in more “exciting” circumstances.

– “Assault weapon” use dramatically increased the chances that a particular story about mass murder would be picked up by news wires and distributed nationally even though those weapons constitute a very small percentage of murder weapon overall.

– The most widely quoted “expert” sources in the news media are anti-gun criminologists Fox and Levin.  Interestingly, the research that they commonly cite does not include the use of fire as a method of mass killing.  Fire is used as a weapon in a surprisingly high number of mass murders.  Fox and Levin regularly state that firearms are used in a disproportionately high number of mass killings.  Interestingly, when mass killings caused by fires are added to their pool of data, the author found that mass killers are no more likely to use firearms as a method of killing than killers who only murdered a single victim

There are far more details in the book, but the bottom line is that the news media seriously distorts the reporting of mass murders.  If you were only to look at reported mass murders in the media, you would think that all of them were committed with firearms, in public places, by white offenders who were strangers to their victims.  That is a very inaccurate representation of reality.

My advice is that you unplug your television and cancel your newspaper subscriptions.  If we know that these sources misrepresent statistics about violent crime, what makes you think that all the other information they report is accurate?