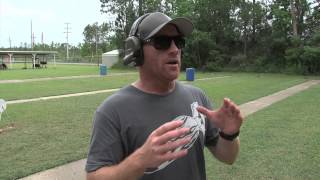 I had a couple questions about the practice session I shared last week.  Some folks were looking for more information on the “interval shooting” that I discussed.  Here are a couple of good references that explain the process I was using.

In the video below, Kyle Defoor talks about a way to increase your speed while shooting.  Watch it and then I’ll tell you how I use the same drill with a couple of modifications and a logical progression structure…

I first learned this drill from Ron Avery about 15 years ago.  I’ve used it in my training ever since.  Kyle uses a six inch circle for a target at five yards.  I use an 8.5″ x 11″ sheet of paper at 20 feet.  Either will work, but I like a little larger target so the shooter doesn’t pay as much attention to accuracy.  Remember, this is a drill for speed.

This is the progression I use:

– 2 strings of 6 with one second intervals between shots

– 2 strings of six with half second intervals between shots

– 2 strings of six with quarter second intervals between shots

After each of these strings is completed, go back to the stage where you consistently got all hits and repeat it.  Then do three more strings at the next faster stage.

If you want to expend more rounds, alternate back and forth between the fastest stage with all hits, the one stage slower than that, and the one stage faster.  Shooting at these varying tempos will adapt you to the idea of pulling the trigger faster than how you normally shoot.  If you practice this one regularly, your speed and accuracy (while shooting fast) will increase.

Beware, this one will eat up some ammo!  Give it a try and let me know if your split times improve! 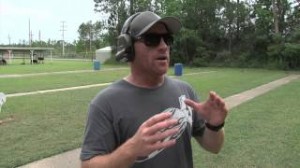