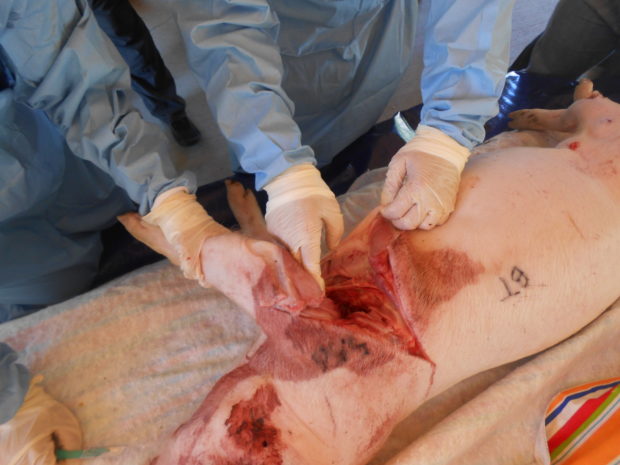 In my AAR of the Paul-E-Palooza 2 training event, I mentioned that one of the medical classes involved a wound ballistics lab where two (humanely killed) pig carcasses were shot with various weapons in order to take a look at the accompanying tissue damage.

Dr. Brian Springer taught the class and led the exploration of the post-mortem wounds.  He wrote a summary of the class findings in the hopes that the knowledge will improve your wound ballistics knowledge and help you make better choices about defensive ammunition.  Thanks to Dr. Springer for his excellent summary!

As part of the medical intensive block of Paul-e-Palooza 2, we were provided the unique opportunity to dissect two freshly slaughtered pigs. The pigs were purchased from a local farmer who humanely slaughtered them at the farm the morning of the class. Method of slaughter was a single shot through the top of the skull with what appeared to be a small caliber firearm (such as a .22LR) that penetrated through the lower jaw with little visible external tissue damage. Both animal carcasses were then taken to the range and shot with firearms, cut with edged weapons, and received blunt trauma.

To better compare wounding, each carcass was shot/stabbed/hit in different locations with the same assortment of weapons. While I am not a veterinarian, I would estimate the weight of each pig to be somewhere in the range of 60-80 lbs. All shots were fired from a range of 7 yards (an average distance for a deadly force firearms encounter.) Shots were fired directly into tissue; there were no layers of clothing or interceding barriers to penetrate prior to hitting the carcass.

As I was not present when the carcasses were shot, I was unable to get all of the details on the ammunition/platforms used. Here is the overview as complete as I can provide: 9mm and .40 S&W Federal HST rounds fired from standard length semiautomatic handguns; Hornady 5.56 TAP rounds fired from carbine length barrel; 12 gauge 00 buckshot and birdshot; slash and stab wounds from a ceramic-blade knife; and blunt trauma from a steel pipe.

Let me again emphasize for the animal lovers: both pigs were humanely slaughtered by the farmer at his farm; all subsequent wounds were delivered post-mortem. Subsequent dissection revealed a number of interesting finds. In no particular order here are what we found and my conclusions:

Thanks again to Dr. Springer for providing the excellent ballistic analysis! 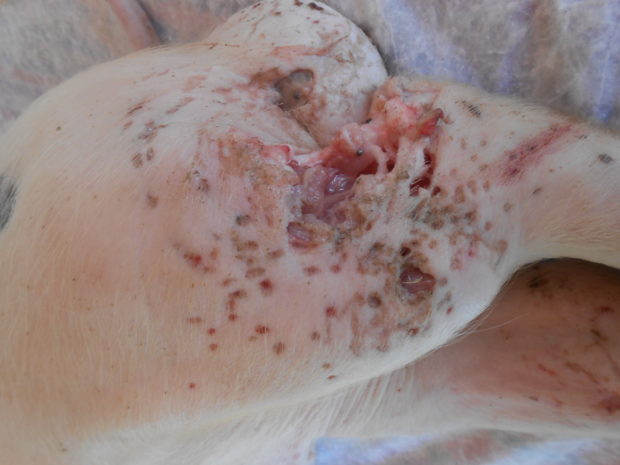