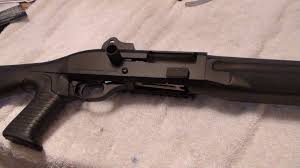 This is  a guest post written by TDI General Manager and Instructor John Motil.  John is at every shotgun class taught at TDI and put together a few notes based on past experience about what works and what doesn’t.  It’s good advice.

– Make sure your shotgun has a stock (either polymer or wood) and a nice soft recoil pad. The wire or metal AK style or no buttstock at all won’t work.

– Please don’t bring a pistol gripped Mossberg to class. The ambidextrous tang safety is useless with a pistol grip installed. I’m sorry if it is factory installed or the gun store said it is the ideal choice, breaking your firing grip to remove or apply the safety isn’t a good idea.

– Most shotgun stocks are way too long to allow the squaring of your shoulders to the target. Some of the after market stocks are even longer than factory when the recoil pad is installed. I was recommending youth stocks, but the drop of the comb makes it difficult to get to the sight(s). They do work great for receiver mounted red dots.

– As for sights the ghost ring rear and high visibility front rule on tactical shotguns. They allow for sighting in slugs and buckshot/birdshot should impact close enough at defensive distances. I have mixed feelings on the fiber optic fronts.  It seems that the pipe breaks or falls out at the worst time. I would go for permanent mounted front sights rather than slip on or magnetic. We have a student with multiple classes on his Burris Fastfire. I imagine the Leupold, Trijicon and other small reflex sights would make great additions, but I would still have a back-up iron or bead to go with whatever you choose.

– White lights are a great idea, but I have seen every type of user installed light fail. Either electronically or physically they fail, the exception is a SUREFIRE LED dedicated shotgun forend.  So don’t put the cart before the horse, review the SUREFIRE website or catalog and purchase a shotgun the can be fitted with forend.

– Under stress the charging handle on the semi-auto shotguns can cause some lacerations. I would recommend the round tactical charging handle, especially on the Benelli M4. (Editor note: I prefer the big round charging handles from GG&G (as seen on picture above) for my Benellis)  Oversize safety and bolt releases aren’t bad as long as you can make them work for you. I put an aftermarket over size safety on my Remington 870 20 gauge, and the narrower receiver allowed the safety to move into the fire position when placed ejection port down on a table.  Be careful with any aftermarket accessories.

– Weapon mounted ammo carriers are a great addition, but on inertia operated guns like the Benelli, they may impede the recoil impulse to operate the gun. We had one gun that would work fine with fours spare shells, but malfunction with five in the side saddle.

The bandoleer sling is a terrible idea, try holding a shotgun on target with a box of shells swaying to and fro. Think about what ammo carrier device you would grab if you grabbed your shotgun for a bump in the night? Probably the side saddle will be your extra ammo. (Editor note: In the Benelli Armorer Course, they told us that anything weighting more than 500 grams on the front of the gun (including lights and spare ammo) COULD cause reliability issues.  It depends on the individual gun, the shooter, and the load being shot.  I carry the spare ammo on my Benellis in a buttstock shell carrier from Blackhawk.)

– The Remington shotgun comes with a dimple in the magazine tube to preclude the addition of an extension tube. They can be ironed or ground out, just make sure if you add an extension or change the follower it doesn’t hang up.

– Ammo sensitivity in the recoil operated semi automatic guns is a known problem. Don’t buy a case of low recoil and find out it doesn’t cycle. We have had problems with new guns not cycling some of the 100 round value pack ammo, but a change in brand fixed the problem. Please try your ammo before class. Chokes and patterning will be discussed, but that is something you will have to do on your own at various distances. Slugs point of aim in relation to point of impact at various distances will tested Sunday. Remember most defensive shotguns have smooth barrels and require Foster/Forster type slugs, saboted slugs are for rifled hunting barrels.

– A shotgun can only carry so much ammo, so a sling is a good idea for transitions to the handgun. I use a Scattergun Technology Side Mounted sling plate and either a Blue Force Gear or Viking Tactics Buttstock Adapter. This allows me to use the BFG Vickers Padded sling.

– The guns that we consistently see working the best are the Remington 870s and the Bennelli M1/M2/M4 shotguns. The Mossbergs seem to have issues with the tang safety getting hard to operate or the trigger/hammer/lifter assembly seizing up. We have seen one or two Saiga shotguns, but the cost of the modifications, the bulk of the magazines, and the reliability aren’t worth it in my opinion. The one Kel-Tec shotgun a student tried to bring to class was returned to the factory twice and then sold.  Scattergun Technologies and Vang Comp are two of the established defensive shotgun shops I would trust for custom modifications.

Thanks to John for the excellent tips!