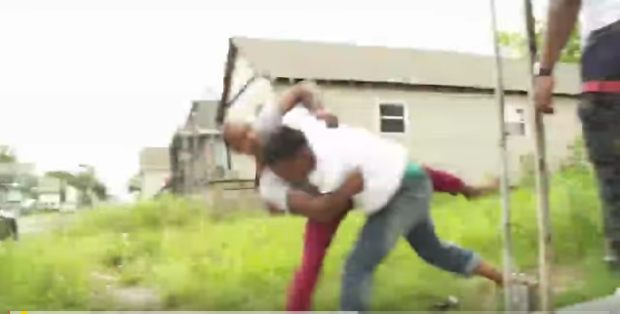 Rory Miller and Marc MacYoung often talk about social dynamics and what they call an “Educational Beatdown.”  The best description of this phenomenon is found in Rory Miller’s article More About Violence Dynamics.  Rory says:

“Most of the people reading this will be comfortable products of comfortable homes with significant education and socialization. This is the norm in North America, where I happen to be writing. The norm is so powerful and pervasive that it can be very easy to believe that the values of middle-class Americans are universal. They are not. There are societies and sub-societies where violence is merely an easy way to solve problems; where a beating is considered as easy  and more effective than talking.

The “Educational Beatdown” is the first thing I thought about when my friend Tim posted this video to his Facebook page.  It is footage of a reporter interviewing some folks in New Orleans about drugs, gangs, and violence.  During the interview, a man arrived and started making disparaging comments.  It seems he didn’t appreciate how the publicity generated by the interview might negatively affect his neighborhood.

His comments were out of line.  In that community, those comments were cause for an “educational beatdown.”  Such a beatdown commenced while the cameras were rolling.  Watch the video below (or at the link HERE in case the embedded video doesn’t work on your device):

The reporters and news anchors expressed amazement of the rapidity and brutality of the confrontation.  Believing that brutality is unpredictable is nothing but naivety on the part of people who have never dealt with violence.  The entire incident proceeded according to a logical progression.  It isn’t the progression that is commonly seen in “civilized” upper class cultures, but it is widely understood by others.  It isn’t a black/white thing.  The same type of confrontation would be seen with hillbilly white folks, biker gangs, skinheads, Mexican cartel members, and others.

The culture of the underclass is one that feeds on respect.  If you step out of line and disrespect someone, there will be consequences…often physical consequences.

Take a look at what happened in the video.  The confrontation followed a predictable course:

When the man started yelling obscenities, he was given a verbal warning that his conduct was out of line.  “Talking that type of shit will get you killed, boy!”

The intruder doesn’t stop uttering obscenities and describes how bringing cameras into his neighborhood was disrespectful as well.

As the argument continued, you can see that the man being interviewed (Easy Money) took off his glasses and set them aside.  This is a universal clue that a fight is about to break out.  They tried talking.  They gave the intruder a warning.  The intruder wasn’t hearing any of it.  In that culture, it’s time to smash heads.  If a fool won’t listen to you and continues to disrespect you (especially in front of a camera crew), then the next step is to teach him a lesson…an educational beatdown, if you will.

The man on the ground isn’t getting the message.  In fact, he is feeling disrespected by the homeowner’s slaps.  He ups the ante by attempting to draw a gun.  The homeowner fouled the intruder’s draw and took the weapon from him.

Notice that the homeowner didn’t shoot the intruder.  He let the man walk away.  That’s how you know this isn’t random violence.  It has a purpose.  Even if you don’t understand or approve of the purpose, it makes perfect sense to all parties involved.  The intruder needed an education about manners.  He got that education by eating a few of the homeowner’s slaps.

The reporter’s amazement led to questioning about why the violence occurred and how it happened so quickly.  The reporter was truly perplexed.  The homeowner answered “I really can’t answer that question.”  He can’t answer because the basic idea of settling disputes with violence is outside the reporter’s comprehension.

If you don’t interact with cultures who embrace violence as a problem solving technique you assume that everyone is like you.  You assume that if you offend someone (accidentally or otherwise), there will not be any physical consequences.  It’s only surprising because you don’t understand that some groups have different “rules” than your group has.

You can’t win the game unless you know the rules.  You may think that the sucker punch “came from nowhere,” but the assailant is following a script.  When you screw up, he will make you understand the errors of your way.  This violence is completely predictable and almost completely preventable as well.

A good general piece of advice is to avoid being an asshole.  People don’t generally attack others in a social violence setting without good cause.  It’s important that you understand how other cultures and groups operate so that you also understand “the rules.”  A self -deprecating apology combined with a rapid exit will often ensure that you aren’t the focus of an educational beatdown.  All cultures give some type of warning before the educational beatdown commences.  It’s up to you to recognize those warnings and to act.  Merely assuming someone won’t get violent because YOU wouldn’t get violent in the same situation is erroneous thinking.

You need to recognize that some cultures don’t play by your rules.  It’s kind of like the school playground.  The person who owns the ball gets to make the rules of the game.  When you engage in any confrontation with a member of a group that prides itself on “saving face,” you are playing by their rules whether you recognize it or not.

Be smart.  Don’t act like an asshole.  Don’t be condescending or insulting to people who live in an environment where violence is the consequence when you screw up.