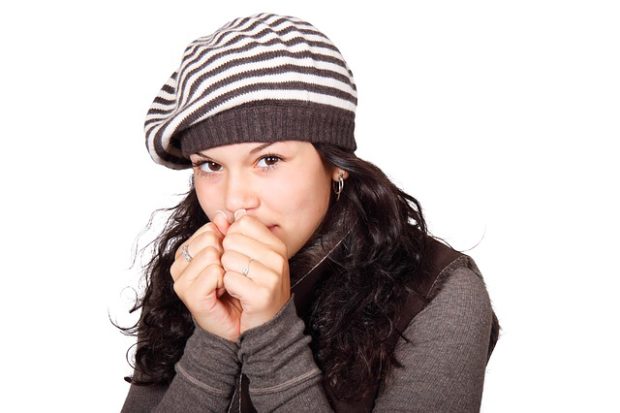 Last weekend I presented a block of instruction at the Rangemaster Tactical Conference.  When I wasn’t teaching, I tried to attend as many classes as I could.  In many classes, the topic of fear and “freezing” came up.  I saw a couple of “freeze” moments while observing the force on force scenarios Craig Douglas was running.  I talked to several students about the issue as well.

Those observations and conversations prompted me to edit and re-post this information.  I originally wrote the article back in 2013.  It compares three female firearms instructors’ experiences with the “freeze response” and how they dealt with the issue.  It also includes a tremendous amount of research from tactical genius John Hearne.  You’ll learn all the science behind adrenal fear response.  It’s long, but incredibly valuable.  Enjoy.

Last week, three of my favorite female gun bloggers all wrote articles about the same topic: freezing under stress.  These ladies’ writings should be required reading for anyone interested in learning about the psychology of self defense.  Each of these women share relevant research and very moving, insightful personal experiences.  Check out these three articles:

A Girl and Her Gun- Fear and the Freeze Response

Before going any farther, I should note that there are several different kinds of “freeze” reactions.  The one we are all discussing is the “freeze” one experiences when overwhelmed by an attacker.  There are other types, and none of these freezes are unique to women.  Males experience the exact same process with the same frequency.

As these ladies were sharing their experiences last week ,  I was coincidentally taking a training class at the Rangemaster Tactical Conference on the exact same topic.  The class was taught by John Hearne (an experienced Federal law enforcement officer and instructor) and was called Performance Under Fire- Myths, Realities and Optimization.  It was one of the best summaries of the available research on the freeze response that I have ever seen.  John digested massive quantities of information and explained some complex neuroscience in a very clear manner.

The questions everyone wants to answer are:

“What causes the “Freeze Response?””  and “How do I prevent it?”

John studied gunfight winners and found one thing in common between all of them.

The winner’s skill level and degree of emotional control were sufficient to solve the problem they faced on that day.

Emotional control is the key factor.  Our brains process information in different parts.  Our rational mind (neo-cortex) allows for logical analysis and complex decision making.  It is generally a superior system for decision making, but it is often slower.  Our “reptilian mind” (limbic system) is much faster, but only allows us to choose instinctive or gross-motor skill responses.

What type of a response is “Freezing”?  It is an instinctive response controlled by the brain’s limbic system.  It was a very viable survival strategy several thousand years ago when it was hard wired into our nervous systems.  If one of our early ancestors on the African plains heard a strange noise, he froze.  Stopping movement is a good strategy when one is being stalked by a lion.  It isn’t so good when someone is shooting at you.  Unfortunately, our brains have not yet adapted to the best survival strategies for a modern world.  We are still stuck in the past, where freezing was likely to enhance one’s survival.

Rationally, we all know that freezing isn’t the best response to a violent attack.  The problem is that our rational mind is no longer in control during a violent attack!  We default to our limbic systems which essentially give us three options: Freeze, Fight, and Flee.  Complex or higher order thinking isn’t on the menu for the reptile brain.

If we want to avoid freezing, we have to avoid shifting into the limbic system and remain processing information with our rational mind.  The fighter who can stay in the rational mind and drive his/her opponent into an emotional response will have a much higher chance of winning.

What causes us to shift into using our “reptile brains”?  John’s research identified several situations that shifted people away from rational thinking and into instinctive limbic responses.  People shifted to the limbic system when they were faced with attacks that have the following characteristics:

Additionally, people who had a high baseline level of anxiety in their everyday life had a more rapid shift to the “reptile brain” under stress.

Does Limatunes’ kidnapping and rape meet the above criteria?  Without a doubt! I defy any of you to remain fearless as a man throws you into a van with a padlocked chain wrapped around your neck!

How about the robbery when AGirl was victimized?  A sudden attack?  A lack of time?  Fear of catastrophic results (especially since her daughter was present)? Yep…all there.  The attacks these women faced were designed to cause a freeze response!  That’s why criminals use those types of tactics!  Each of these women was outmatched by her own brain’s outdated evolutionary survival responses.  They didn’t do anything “wrong.”

So how can we program a better response?

John’s presentation noted several possible alternatives.  The key is to not allow ourselves to be so overwhelmed that we shift into the limbic brain.  We must remain in emotional control in order to access our higher order thinking abilities.

Control is what keeps people in their rational mind.  Do I have abilities that exceed the problem?  If the subconscious believes that you do, it will keep you out of the limbic system.  When your brain is rapidly analyzing unfolding events, it is asking these questions:

Have I ever seen this before?

Do I have any plans for this?

Does the unfolding of the event match my mental map of what is supposed to take place?

When the answers to these questions are “no”, the brain realizes that you are not prepared to make an intelligent decision with regards to your own safety.  If your subconscious mind doesn’t believe you have the skills to solve the problem, it will allow the limbic system to rule.   Adrenaline is dumped into the body and you are shifted into the “reptile brain” for a more trusted instinctive response.  Sometimes that works out just fine…you have added strength to run away or fight the attacker.  Sometimes you end up freezing.  It’s a crap shoot that should be avoided if possible.

The best way to stay in the rational mind is to increase both your abilities (through training) and self confidence (through achievement).

John identified the following factors as being critical to increasing skills and self confidence.  When the brain starts asking the questions above, you want the answers to be “yes”.  If that occurs, your mental processes remain in the neo-cortex and you won’t default to a “freeze” response.  Here’s what gets you to “yes”:

– Mental imaging (I’ve seen this before)

– Competition, man-on-man shooting, prior wins (I have a history of winning)

There is one additional factor that shifts us into the limbic system…novel stimuli.  Humans are natural recognizers of patterns.  Anything new that we haven’t experienced or thought about before is difficult for us to process.  When what we are seeing doesn’t match with a “map” we have of something similar in our brains, we don’t know how to respond.

When experiencing a common, everyday  stimulus, the brain is able to modulate adrenaline response for optimization.  When the stimulus is new, the brain doesn’t know how to classify it.  A large amount of adrenaline is then dumped into the system and the body is shifted into default limbic system responses.

That’s it in a nutshell.  John Hearne summarized thousands of pages of research into this very simple and valuable formula.  Please note that this article is based off of my notes and mental recollections of John’s presentation,  Any mistakes should be attributed to my own feeble mind.  John did the research and got it right. If anything is screwed up, it happened during my “translation” of John’s excellent program.

It’s pretty simple:  Train to achieve a higher skill level (in both empty hands and firearms combatives), test your techniques in competition as often as possible, and avoid “novel stimuli” by being exposed to force on force scenarios and mentally imagining possible attack scenarios.  You want to think through every possible problem so your brain can say “I have a plan for this.”

Do all of those things with enough frequency that you become convinced that you have the skills necessary to solve any kind of problem.  Once that occurs, your reptile brain’s outdated survival responses aren’t nearly as likely to come out to play.

Special thanks to John Hearne for the superior presentation.  John teaches at the Rangemaster Tactical Conference each year and also does travel shooting schools for Rangemaster.  It would be worth your while to spend some of your training dollars with him.

I’d also like to thank Kathy, Melody, and Shelby for their great blogs.  You ladies inspire me to write more so I don’t look like a slacker in comparison!  Readers, if you aren’t regularly checking out the information provided on the Cornered Cat, Limatunes’ Range Diary, and A Girl and her Gun blogs, you are truly missing some great information.  Fix that.