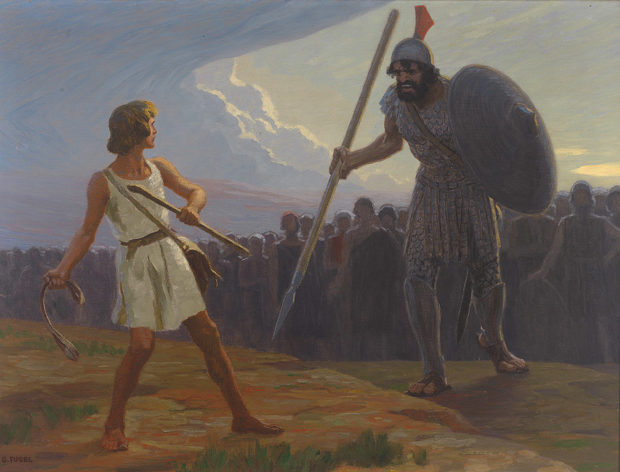 Disparity of force is a concept often discussed in the self protection field.  We commonly see the concept described when an older or weaker person uses a weapon to defend against a younger, more physically dominant attacker.  When this happens, it sometimes creates issues with regard to public perception….just think about the George Zimmerman case. The court eventually cleared Zimmerman, but shooting an unarmed man created some significant issues for the defense.

Those issues also are present in another type of incident…one where the defender is actually the more physically superior participant in the melee.  Watch the short video below and think about your initial perceptions as soon as you finish viewing it.  The giant man in green looks like he works for a restaurant and is stationed at the door to keep people out. He gets attacked by a drunk girl wanting to come in. She kicks him in the groin and then punches him. He strikes back. Is he justified?

*Some foul language is present in the video.  Turn down the sound if that offends you*

So, what do you think?  Let’s take the issue of employment out of the equation for now.  If he is acting in the role of a bouncer, he should be better trained and probably shouldn’t have acted the way he did.  There are better ways to deal with drunk people (just locking the door is one.)  But remember, the courts don’t require that we make the best decision in a use of force case, only that we make a REASONABLE one.  Were his actions reasonable?

She kicks him in the groin, he pushes her away.  She punches him in the face and he strikes back with an open hand strike (which unfortunately puts her through the window.)  While his actions aren’t ideal, I think they would be judged as being reasonable in a court in the USA.

“If you buy the ticket, you take the ride”  is an often-quoted  philosophy.  I don’t think the girl should have kicked him and I personally think that she got what she deserved.  That still doesn’t change the fact that the entire incident looks bad.  That negative appearance will be a huge hurdle to overcome if this case ever makes it to trial.

In any self defense act, there are many factors that are out of the defender’s control.  In addition to being unable to control these factors, most armed citizens don’t even consider that they exist.  Let’s take a look at a few of these uncontrollable factors you may not have considered….

1) You are likely to be on camera.  I often hear trainers advocating fleeing the scene of an attack and not reporting it to the police to prevent malicious or unjust prosecution.  In today’s world, I don’t think that’s really a good option.  Every passerby with a cell phone will be recording what’s happening.  Just look at what happened here.  The girl filming even said “I’ve just got YouTube gold!”

It’s best to assume that you are on tape and act accordingly.

“The guy in the green just fucked over some girl!”

“Get your hands off her!”

It doesn’t seem that they noticed the girl kicking or striking the guy in the green.  They only noticed his defensive counterattack.  How do you think those witnesses are going to describe this event to the police?  I’m betting you’ll hear lots of statements like “That big guy in the green just pushed the little girl through the window.”  That isn’t what the defender wants.

Most of the witness perception is out of your control as an armed citizen, but one concept that you should consider is the idea of “training your witnesses.”  You want any witnesses to get an accurate understanding of the events that are occurring.  Do you think this guy would be better off if he had yelled at the girl “Stay back.  Don’t kick me again!”  What if he yelled out to the crowd “The girl in the black vest just attacked me.  Somebody call the police!”

Statements like these let your witnesses know what is truly happening and will help assure that you aren’t wrongfully charged by the police.  Loud repetitive verbal commands should be a part of your training program.

3) Unexpected things happen in a fight.  Would this even be an issue if the girl hadn’t broken the glass window with her head?  Probably not.  Did the bouncer here intend to throw her through the glass?  I doubt it.  No one would have ever expected that to happen, but it did.  And now the bouncer is likely to be in some trouble.

In the very first use of force incident I ever had as a cop, I was responding to a domestic situation.  An ex-boyfriend was threatening his former girlfriend outside her house.  The girl was watching just inside her front door as I talked to the boyfriend out on the sidewalk in front of her house.  The former boyfriend yelled a few threats and then suddenly started sprinting towards the girl, yelling that he was going to kill her.

I took off after the guy and tackled him just as he reached the front door of the house.  Unfortunately, his momentum carried him through the glass storm door.  I then drug him back outside and handcuffed him.  Breaking the glass and then being pulled back through the broken window completely shredded him.  He went to jail, but he had to go to the hospital first.

I didn’t intend to hurt him in that manner, but like I said above, sometimes unexpected things happen.  Any time we get involved in a violent situation we shouldn’t be surprised when the unthinkable happens.

Even more reason to avoid trouble as much as possible.