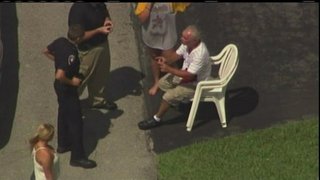 Have you ever thought about what you would do if you were attacked while outside doing yardwork?  Most people working in their yards aren’t expecting criminal violence.  That makes them a good target for predatory criminals.

A man in Florida was confronted by two teen-aged robbers as he was cutting some branches in his yard.  The two boys pulled a gun and tried to take the man’s gold chain.  He fought back, but he was unsuccessful.  He ended up hit by three bullets.  The robbers are still at large.  Read more about the story at the link below.

What would you do if you were approached by a criminal while doing yardwork?  Here are a couple questions to ask yourself:

1) Do you carry any weapons while working outside?  For those of you who carry guns, a .38 snub revolver makes a lightweight and handy “yard gun”.  If you don’t want to carry a firearm, at least consider a knife or pepper spray whenever you leave your house.  You may also consider mounting a weapon to your lawn mower for convenience.  A large machete or axe wouldn’t look out of place. 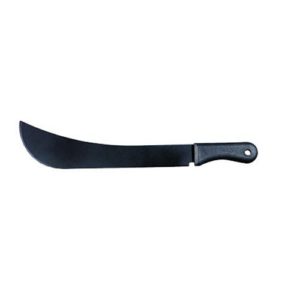 Tool for yard work or effective weapon for defense?

2) Are there improvised weapons you can use?  This homeowner attempted to cut the robber’s hand off with a pair of limb cutters.  He wasn’t successful, but at least he was thinking on his feet enough to utilize what he had in his hand to defend himself.  If you are using power tools like chain saws, weed whackers, or hedge trimmers, resist the urge to turn them off if you are approached by a stranger.  The criminal will likely pretend he can’t hear you and motion for you to power down your equipment.  Don’t do it.  Most power tools make excellent improvised weapons.

3) Do you carry a communications device with you while outside?  I don’t personally care for constantly carrying my cell phone, but I can appreciate their role if you are attacked or injured and can’t make it back inside your house.

4) Do you normally wear headphones when doing yard work?  Recognize that the sounds of power equipment or music can reduce your ability to detect an attacker’s approach.  Be certain to remain extra vigilant visually if your sense of hearing is diminished.

5) What do you do to secure your house while you are outside?  I once had someone steal a mountain bike from my garage while I was mowing the grass in the back of my house.  I had left the garage door up and the bike was easy pickings for the thief.  He could have just as easily gone inside my house, as the door from the garage was unlocked as well.  It makes a lot of sense to shut and lock exterior doors to your house whenever you are not in their direct line of sight or preoccupied. If you leave your house unlocked, do you have a plan to deal with an attacker who surprises you when you finally finish your work and go back inside?  What would you do if you saw someone running from your house or garage while carrying some of your possessions?

I hate yard work as much as anyone else.  The only thing worse than mowing grass is getting robbed while your are mowing grass!  Work through these issues so that you are alive to enjoy the cold beer you’ve earned after all your hard work!