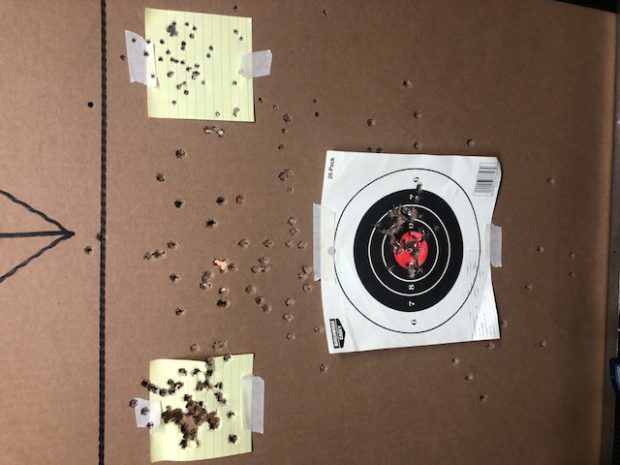 As I plan to do every session this year, I started out shooting the Consistency Target.  Two passes through this one.  Instead of using my duty gun (Glock 17), I shot my primary concealed carry gun (Glock 19) today.  I had just switched to the narrower Trijicon HD XR front sight.  It really improved my shooting on this drill.  My first run was 22.78 (minus two).  The second run was 22.41 (minus two).  Both just barely broke the par time. 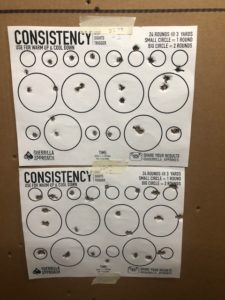 My goal after my warm up was to work on a combination of speed and accuracy with my single handed shooting.  Dave Spaulding recently wrote about a new drill he was playing with on his Facebook page.  He had tentatively called it the FYFO drill (you’ll have to go to Dave’s page for the explanation).  I thought I’d give it a try.

Dave shot the drill at a 3″x5″ card at five yards.  I used a slightly larger post-it note as a target instead.

The drill is quite simple.  It is a single 10-shot string fired from the ready position.

The goal is to complete all 10 shots in under nine seconds and get all hits on the small target.  I found the drill challenging and fun.  I ran it five times with my Glock 19 with the following times:

That nine second par time is doable, but it’s tough!

I then shot a modified version of the same drill with my Smith and Wesson 351C .22 magnum revolver.  Since it only holds seven shots, I modified the drill in the following manner:

I ran that one six times with the following times:

This version is only seven shots, so a nine second par time is too easy.  I think a seven second par time would be quite challenging for any shooter firing a snub revolver.

With my Glock, I had been shooting 17- round magazines.  Since the FYFO drill used up 10 rounds each run, I had some mags with seven round left in them.  I shot those rounds one handed at a small bullseye at 20 feet.  I concentrated on tempo shooting each round with a one second interval both strong and weak hand.  I did the same with the remaining eight rounds left in the box of .22 magnum ammo I brought to the range. 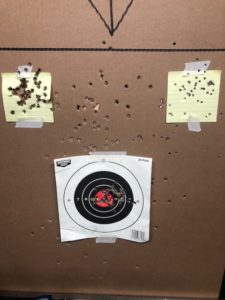