I’ve been studying these active killer events since 1975 and have amassed a database called the Stopwatch of Death©.  Our chief researcher Don Boal and I believe that the recent Walmart shooting incident, as reported, was unusual behavior for an active killer. Not only because of the fact that on-site armed citizens caused the active killer to stop murdering and flee, but also how the local anti-gun media chose to erroneously report it.

INCIDENT SUMMARY
Police say shoppers drew guns after shooting: On Wednesday, Nov. 1, 2017 shortly after 6 pm, in Thornton, CO, a coward, age 47, opened fire inside a Walmart, killing two men and a woman. Innocents were forced to either hide in the store or frantically run for the doors. Surveillance footage inside Walmart showed “a few” people inside the store who drew weapons in response to the gunfire

The active killer fled and was later arrested about 14 hours after the shooting. The killer’s neighbors described him as a rude, hostile loner who cursed at them and often carried a shotgun or rifle to and from his apartment.

NO CREDIT FOR ARMED CITIZENS?
The mainstream news reporting failed to mention whether the Walmart shooter fled because multiple armed citizens drew defensive firearms to stop the killing.   Based on the known facts, that’s our take on this incident. Unfortunately, local law enforcement complained that shoppers pulled guns in response to the killer, “slowing their investigation as authorities had to eliminate possible suspects from surveillance video” and the media picked it up from there.

Sorry, you cannot have it both ways. Security videos viewed in sequence from beginning to end would start with the action of the murderer actually shooting three people in the store, thereby positively identifying him as the principle suspect. Following this would be the lawful reaction of surprised armed citizens, quite naturally drawing their own firearms. Of course they would have to be eliminated as involved suspects, but the security video would immediately clear them as not having shot anyone.

The journalists reporting on this incident seem to have missed the bottom line: after the armed citizens drew weapons, the killer stopped shooting people!  Saving lives is always a positive outcome!

Typically, off-site police cannot arrive in time. The local PD may have been unhappy that the most probable reason the killer fled, was armed citizens. Perhaps it was not so much what LE actually said as how the anti-gun media chose to word it? Readers can come to their own conclusion on this.

The PACT Consultant Group, having considerable published research and extensive experience about active killer behavior, will presume that the killing was aborted by the obviously armed good guys, since it is the simplest, most logical answer.

Occam’s Razor suggests that the simplest answer is usually the correct one. If the security video clearly shows multiple good guys with guns, then the killer likely realized he was outnumbered and fled the scene. Those brave citizens should be heralded as heroes for stopping additional murders, rather than scorned by an anti-gun media.

OFFICERS DELAYED ENTERING?
We are all handicapped by having to rely on media stories that merely parrot law enforcement talking points.  We sometimes come across incidents where police officers may not have used the best practice for responding to a Rapid Mass Murder (RMM)© incident.

Inferior tactics such waiting for multiple officers to arrive before entry (rounding up a Posse) and Tactical Loitering©, endangers those innocents left inside. Without proper training for this type of incident, the officers will unwittingly create more fatalities during the event.

On many police calls, slowing the response and waiting for more officers is the right answer.  It allows officers to better assess what is actually going on at the scene. However, in most attempted RMM incidents, responding officers already know what’s happening and innocent lives are at risk. Cops need to make immediate entry to save the most lives possible.

Only half of attempted Rapid Mass Murder© incidents are ever stopped by anyone. In that half, the killing only stops when the murderer is incapacitated, kills himself, or surrenders. The first officer on scene of ANY man-with-gun call is always at risk. That risk goes with the territory.  However, the results of our freely published RMM research reveal that in 99% of incidents an active killer is acting alone.  He is in the process of killing people and, preoccupied with homicidal intentions, is typically an easy target for any competent officer who is able to enter and locate him in time.

THE TIME FACTOR
Time is the problem, and the reason why off-site police have generally been ineffective in stopping RMM. In our latest research, resistance to RMM has been initiated by a single actor 80 % of the time. Fellow trainer and author friend Chris Bird rightly calls these folks “Irregular First Responders” in his excellent book “Surviving a Mass Killer Rampage: When Seconds Count, Police Are Still Minutes Away”. 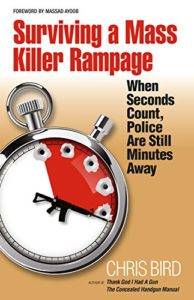 When law enforcement officers have successfully interdicted past rapid mass murderers, in 70% of occasions, the officer acted alone. The minority of remaining successes where two or more officers responded together resulted in only 30% of the interdictions. It’s best that police departments play the odds and train officers to respond individually to RMM incidents, rather than wasting time waiting to assemble a multiple officer response team.

What police do when they arrive depends on how well the responding officers are trained. That is why we question the Walmart incident statement:

“The first officers on scene needed to assess the situation and develop a strategy to go inside because it was unknown whether the shooter was dead or alive and whether he was still inside or already fleeing with the store’s customers and employees, Avila said… “We’ve got multiple parties down, we’re still trying to ascertain what their conditions are,” Officer Victor Avila of the Thornton Police Department told Reuters by telephone not long after police arrived on the scene.

Avila also said… “that the gunshots had ceased by the time the first officers arrived on the scene.”

Our concern here is twofold, first, that law enforcement’s goal is simply to STOP THE KILLING.  Paramedics will stop the bleeding and treat the victims. Secondly, there are some, even in law enforcement, who are still unaware that actually hearing gunfire is NOT a reliable indicator of whether or not a RMM event is still ongoing. Inside a huge big box store, gunfire may not be heard or recognized as gunfire over ambient noise. Outside the building, reliance solely on hearing gunfire is rarely a reliable response strategy

Another unfortunate tragedy occurred on November 5th.  Almost half of the Texas church parishioners present during a RMM incident were murdered. Our records indicate that this is the worst church attack in America in terms of total fatalities.

The good news however, is that additional casualties were prevented when a neighbor with a rifle responded to the scene and engaged the killer.  Another example of an Irregular First Responder. On the positive side, news reports on this one gives appropriate credit to the armed citizen hero:

Armed citizen ‘engaged’ killer, ending an event which led to 26 fatalities and 20 additional people injured in a church Rapid Mass Murder©. The suspect dropped his rifle and fled with a hostage after being confronted by Stephen Willeford, 55, who had grabbed his own rifle, shot at and pursued gunman’s vehicle, putting an end to the rampage.

There are both CCW permit holder and law enforcement lessons to be learned here in these two incidents.  On the law enforcement side, is your Rapid Mass Murder© response method consistent with documented and published best practices utilized by other agencies?

From the CCW side, it is obvious that armed CCW licensees can stop RMM incidents in progress.  Churches have the need for on-site church safety procedures and forming a church safety team to best utilize the skills that armed parishioners share with the congregation.

About the author: Ron Borsch is a 47 year retired police officer, law enforcement and SWAT trainer, author of numerous published articles, four chapters in three books, a member of board of advisors for SchoolGuard.com, (a smart-phone “app” for police and  teachers), and Viet Nam veteran. His nationally recognized expertise is police response to Rapid Mass Murder© by active killer in public places and on-site facility safety and security protection recommendations.