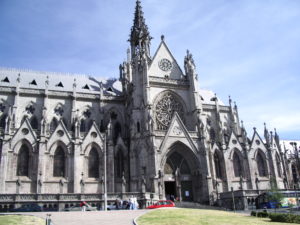 This is a guest post written by long-time police trainer Ron Borsch.  Ron has been a friend for many years and has done more research on active killer events than likely anyone else in the world.

Ron is now semi-retired and looking to write a little more.  He will be contributing a few articles for this site in the future.  He still teaches some private police defensive tactics and active killer response classes.  He is also available for consultations.  His full bio and contact info are at the bottom of the article.

And now, I give you Ron Borsch….

One would imagine that among different locations, places of worship would be a safe haven and we would not have to be concerned about safety from violence there. Unfortunately, churches are not the sanctuary they once were. Here we are not talking about mere arson, assault, burglary, mugging, rape, or robbery. Even worse, churches can and have been the site of murder, multiple murders, and “Rapid Mass Murder”©*, (RMM or attempts). About a year ago, churches were the third most commonly targeted location by active killers, after Schools, (K-12), and Colleges/Universities.

For sure, and thank God, RMM is far from a common occurrence anywhere. But it sure sucks when the fickle finger of fate picks your location and you for a RMM incident. The active killer* is attracted to where his health, welfare and safety are insured. An active killer magnet is where they can find unarmed defenseless innocents. Locations where a law, rule or sign forbids honest, law-abiding or otherwise legally permitted citizens to possess firearms become virtual target locations for these active killers who are anticipating being an “unstoppable” force there. The sometimes astonishing rapidity with which they can murder initiated our “Stopwatch of Death”©* database.

WHAT WE KNOW ABOUT THE ACTIVE KILLER
Active killer’s ages are something we need to research further. What is known is that our human brains are not fully matured until about age 25 and some authorities place maturity as late as age 30. It is also known that “juveniles” are more affected and motivated by the powerful “Copycat Effect”, most common in schools today. Aided by the media, affected youth are attracted by the “Instant Celebrity Status”© that catapults them from being nobody to suddenly becoming “famous”, (alive or deceased, in their sick minds). A serious contributing affect found in many active killers has been obsessiveness with playing killing video games. An information resource on this is the book “Stop Teaching Kids To Kill” by Dave Grossman.

AN OVERVIEW OF RAPID MASS MURDER FACTORS
One thing to keep in mind is that generally, only about half of RMM is ever stopped by anyone, meaning in those cases that the murdering stops only when the killer says it stops. Seconds are golden considering that we have at least two RMM examples documenting that more than one attempted murder per second is possible, so time is a huge handicap. Most of us have complete confidence in the quality and responsiveness of our local law enforcement agency, but unfortunately, police are most handicapped by TIME.

Why? There is a regrettable but natural delay in notifying law enforcement. Of little known delayed notification times, expert Ed Sanow says that this time delay ranges between five and seven minutes. Try to understand that for those whose safety is seriously endangered, notifying law enforcement may be the last thing on their mind. People not yet aware they are in danger may experience denial that evil may be on their very door step. For example, thinking something real “can’t be happening” or concluding that gunfire must be fireworks instead of calling police right away.

When law enforcement is finally notified, there is additional call-taking time, dispatching time, officer response time, officer entry time, locating the killer time, Etc. While the size of your community is known, just how distant the closest officer will be is always an unknown. Here are a couple of examples. In a 2008 Finland RMM event, (10 were killed in 10 minutes), there was a known 6 minute delay in notifying law enforcement, then a 14 minute police response time. In the 2011 Tucson AZ 15 second incident, (6 killed, 13 wounded), the time delay in notifying police is unknown, but response time afterwards was 4 minutes.

A recommended reading resource on the subject is “Guns in Churches Addressing Church Security Needs” – a report from the Mennonite Mutual Insurance Co.

We suggest that church leaders read the full MMI article and their pro and con three options. MMI does note: “Allowing or encouraging people to carry weapons into church with no written policy or specialized training creates a huge liability issue and should be avoided. Regardless of which option is chosen, church leaders should consider posting their policy regarding weapons in and around the church building,”

Insurance companies are sensitive to risks and pay-outs. Kudos to them for even broaching the subject. Some of their advice is based in part of avoiding liability for a firearm mishap in the church. On the other hand, “Rapid Mass Murder”© by an active killer, while a very low frequency event, is also a very brutal mass tragedy event. Knowing that churches have been targeted by these murderers, a place of worship bears responsibility for reasonable protection efforts on behalf of their flock. These days, a sanctuary needs to be enforced!

In the MMI summary, they advise: “No one can completely stop bad things from happening, it is unfortunately part of our human condition and the society we live in. However, a well-designed plan can reduce not only the severity, but also the level of liability a church may encounter if, or when, something tragic does occur. At the end of the day, we must be able to say as good stewards, “We trusted God and did our very best to care for the people and property entrusted to our care.”

While unarmed citizens have successfully stopped the killing, many have died trying. Still, bare-handed against a firearm, (even a knife or club), is very, very dangerous. In some ways, an armed volunteer church safety and security team may not be the best solution, but it is an enviable problem solver for the church that cannot afford the expense involved with hiring professionals. Anyone can have a “champagne taste” but many of us have to deal with the reality of a “beer budget.”

In planning ahead, we can learn something from the analogy, “One is none and two is one.” The point is that support personnel assistance, (and duplicating equipment), is important. Thinking about minimizing the minimum? Stuff happens! Understand that assigned folks can get sick at church, (like the flu), or a team member not show up at all, (injured in an on-route traffic accident, etc.). It is safer to have more than a skeleton crew for unforeseen eventualities.

Properly done, volunteers or professionals would still require a team. For example, a small church may get by with a team of two plainclothes, front and rear corner outside isle positions, (alternating left-right to the opposite side each week). An improvement would be an additional member in place as or near a greeter at the door, and another enhancement would be a member in a car in the parking lot, able to watch the mannerisms and “tells” of folks coming in cars and or walking towards the church. Consider that a mega-church would of course require a far larger staff. By the way, the Colorado Springs Church CO mega-church in 2007 had a successful stop-the-killing response from one, (of several), volunteer armed church guards. Jeanne Assam stopped a rifleman bearing multiple firearms and carrying hundreds of rounds who had already murdered that day.

A member of the congregation will be far more familiar with fellow parishioners, the building and the differences between what is normal and what is not. In Ohio, a CCW permit holder is allowed to carry in a church, providing that the church has given him or her permission in writing. Applicants with former military or law enforcement experience generally should be given first preference. Of course, only a CCW permit would be a bare minimum for those content with mediocrity or less. For example, many CCW course instructors are not permitted to use targets resembling a human.

This is horrible “Target Habituation”© to prepare volunteers for the possibility of justifiable homicide against an evil rogue-human bent on murder. Training targets must be armed and closely resemble a real human being, which means a face. In Dave Grossman and Gloria DeGaetano’s book Stop Teaching Kids To Kill, on targets, they speak of “World War II bulls-eye targets in training did not properly prepare soldiers for combat since they were not humans or even simulated humans…shooting bulls-eyes do not teach what it takes to look at another human being in the eyes, lift up a weapon, and knowingly try to take their life.”

Normal folks may agree that having anyone in a uniform would routinely deter trouble makers, but active killers are of course NOT normal people. While the typical active killer may be a coward with suicidal tendencies, there have been some very determined active killers. For example, the original plan of the Columbine killers was to first assassinate the School Resource Officer where and when he usually had his lunch (he was not there then). What we can learn from this is that with a very determined active killer, a uniformed guard could be the very first victim of RMM. Therefore, a “Plainclothes Surprise” is recommended.

“We suggest, you decide”

About the author: Ron Borsch is a staff instructor for the Kent Martial Arts Club and a Viet Nam veteran, (1965-66 U.S. Army 101st Airborne Paratrooper). Ron’s 30 year law enforcement career included 20 years as Rangemaster, Pistol Team Captain and 17 years as a SWAT operator and trainer. Concluding his law enforcement career and retaining a police commission, he semi-retired as an agency consultant. Along with support from the 7 SEALE Chiefs of Police from 1998 to 2015, Ron initiated, managed and was the lead trainer for the post-graduate facility SEALE Regional Police Training Academy in Bedford Ohio. The academy served over one hundred law enforcement agencies from 9 states. He is nationally recognized for his research documenting the 7 out of 10 successes of “Single Officer’s Lifesaving Others”© in police responses to “Rapid Mass Murder”© by active killers. Ron has presented various subjects in several different states to fellow officers, national and international instructor audiences and Chiefs of Police.

Rapid Mass Murder© (or RMM): “Within 20 minutes, 4 or more murdered at the same time and public place”. In the “Stopwatch of Death” database, attempts of RMM are also counted. Not counted are the criminal actions of police, military, terrorists or street gangs.
Stopwatch of Death©: The SWD is factoring RMM and attempts, (wounded), together divided, (when known), by the killing time. For example, the SWD factor for Columbine High School, (1999 Littleton CO), was 02.9 murder attempts per minute. Two RMM events were over in 15 seconds, having SWD factors of 88.0 and 76.0 murder attempts per minute, (1996 Tasmania Australia, and 2011 Tucson Arizona respectively).
Active Killer: “One who commits Rapid Mass Murder”. This includes murder by any means. The active killer term is not interchangeable with the two totally neutral words, “active shooter”