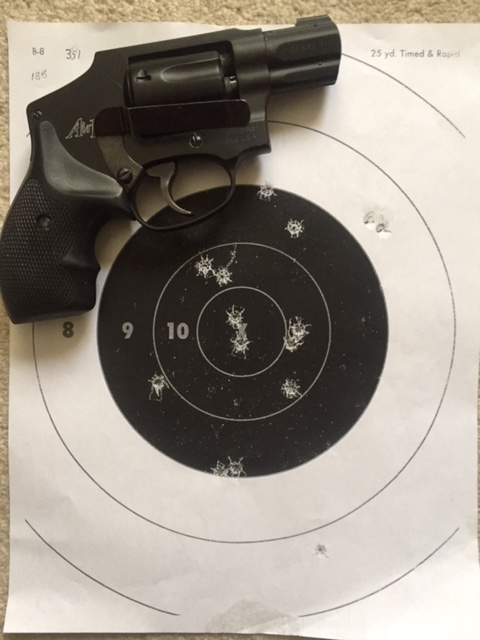 I got this drill from Wayne Dobbs and Darryl Bolke at the Hardwired Tactical Facebook page.  Wayne and Darryl are both experienced retired police officers and firearms instructors.  They put out top-notch information.

This is the drill they developed for testing one’s competency with a snubnose revolver.

Here is what we came up with for the HiTS Snub Super Test. This is all shot on a B8 Bullseye repair center on a silhouette type backer. This is all shot from a good low ready where the muzzle is below the base of the target stand.

For the “Advanced Version”, you will draw from a concealment holster. For those using a pocket holster, start with the grip established in the holster. Also, at the 3 yard stage, two hands can be used, and 3.5 seconds in line with what we were comfortable with to hold black with sub 15 ounce guns.

I shot the snubby super test cold (no warmup shots) last week at the range.  I ran the test with three different snubby revolvers, shooting the test twice with each gun.  As I wanted realistic scores, I shot the .38s with 125 grain +P Jacketed Hollowpoint loads instead of target wadcutters.  I did the “regular” version, shot from low ready.  Here were my results:

This test really highlighted for me that heavy recoil has a severe effect on scoring abilities when shooting fast.  The 351C has essentially no recoil.  I scored well with it.  The model 12 is on the larger K-frame and weighs 21 ounces.  I scored well with it too.  The 342 (the lightest .38 snub on the market) was very difficult to shoot as rapidly as the other two guns.  My low scores showed that very clearly.

I’d urge any of you who carry snubnose revolvers to try this test.  It’s only 15 rounds and is fast to shoot.  I’ll be working it some more until I’m able to get all my rounds in the black.