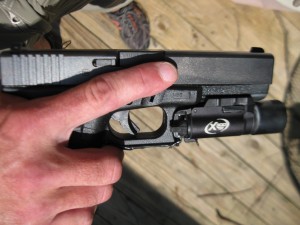 I’ve seen several stories in the news recently about cops and armed citizens accidentally shooting themselves.  One recent story discussed how a police officer shot himself after slipping on the ice while serving a warrant.  That type of accidental shooting is far more common than you might think.  It’s critical as tacticians that we understand how it happens so that we can take countermeasures to prevent it.

Most of us understand the importance of keeping the finger off the trigger when not in the act of shooting.  That’s a vital safety rule, but we must take it farther than that.

Check out the picture below.  How many people do you see holding their fingers like that when “not on the trigger?” 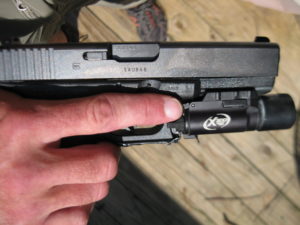 Many shooters hold their fingers this way when not firing.  They believe that since the finger is not on the trigger, an accidental discharge won’t occur.  In general, they are correct.  But most shooters don’t know that certain situations can cause involuntary hand clenching.  The tightening of the hand causes a contraction of all of the fingers with a force up to 30 lbs. (the Glock trigger pull weight is around 6 lbs.) and cannot be consciously controlled.

Take a look at the picture again.  Where do you think the trigger finger will end up if there is an involuntary hand clench?  You guessed it…on the trigger. 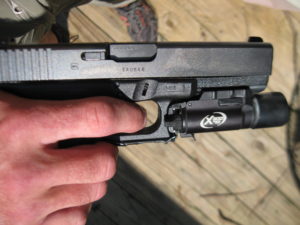 This is where the finger ends up after the hand clenches

So what causes these involuntary hand clenches?

The three most commonly identified causes of involuntary hand clenching have been extensively studied.  They are as follows:

1) Postural Imbalance.  When the shooter loses balance or trips, his hands will clench.

2) Startle Effect.  When the shooter is under stress and surprised, there will often be a hand clench.

3) Interlimb Interaction.  Under stress, when the non gun hand closes violently, the gun hand will clench,  spontaneously duplicating the actions of the non-gun hand.

The video above is a perfect illustration of the concept of “interlimb interaction.”  As he grasped for the shell he had jacked out of the gun, his dominant hand clenched in the same way that his weak hand was closing around the shell.

Just how common is this phenomenon?  It’s way more common than most shooters realize.   A study of all firearms discharges in Federal Agencies (FBI, DEA, ATF) from 2000-2003 found that out of 267 total discharges, 102 of them were accidental discharges. Weapon handling skills and trigger finger discipline are universally lacking, even among supposedly “well trained” individuals.

There are a few other situations that can contribute to involuntary hand clenching.  A study conducted by the German National Police identified the following situations when officers were most likely to touch their triggers unintentionally:

– Pushing or Pulling with the non-gun hand

In addition to the above, American research by the Force Science Institute has identified more causes of unintentional discharges if officers’ fingers are on or near the trigger when:

– Hand confusion- when the hands are crossed (think Harries Flashlight position) it is difficult to differentiate between the two under stress. An officer might be trying to turn on the flashlight, but accidentally mixes up his hands and pulls the trigger instead.

– A “YIP” (defined by a sudden spasmodic jerk of the hand or forearm muscles) is experienced. It’s been intensively studied in the context of figuring out why pro golfers miss putts, but it is now being applied to research about accidental shootings. Yips occur more frequently under high stress and heart rates

A very good review of the science behind accidental discharges can be found in this document created by the Washington State Criminal Justice Training Commission.

The most important training consideration is keeping the finger off the trigger unless you are in the actual act of firing.  Don’t have your finger on the trigger while searching a building or holding a suspect at gunpoint.  Keeping the trigger finger in register (off the trigger) only adds an average of .15 seconds to the shooter’s firing time.  That’s an inconsequential amount of time in a gunfight, but the safety it promotes is invaluable.

There are two good positions in which to keep the finger when not firing.  The one I use and teach is to place the trigger finger as high as possible on the slide without disturbing the grip.  If the hands clench with your finger in this position, you aren’t likely to contact the trigger.

An alternate trigger finger position was first advocated by Massad Ayoob.  Mas likes placing the finger fairly high on the frame with the trigger finger bent or curled.  The bent position causes the finger to curl onto the frame if the hands are clenched.  This position also gives the shooter a little more strength to resist a gun grab attempt. 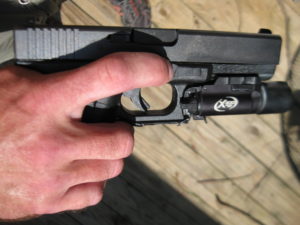 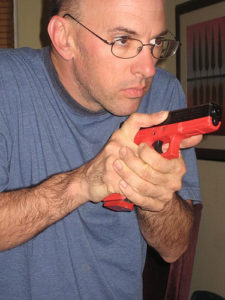 In either position it is important to find some sort of tactile reference.  You should strive for consistency by trying to feel the same spot with your trigger finger at all times.  The spot will vary depending on trigger finger length and the gun you are using.  For me, feeling the bottom edge of the ejection port lets me know my finger is in the right place.  On Glock handguns, the slide lock lever makes a good indicator for the Ayoob finger position.

No matter what finger position you favor, you must practice it every time you shoot in order to build the familiarity necessary to default to a correct position under stress.  Don’t let your finger “accidentally” slide onto the trigger in a stressful situation.