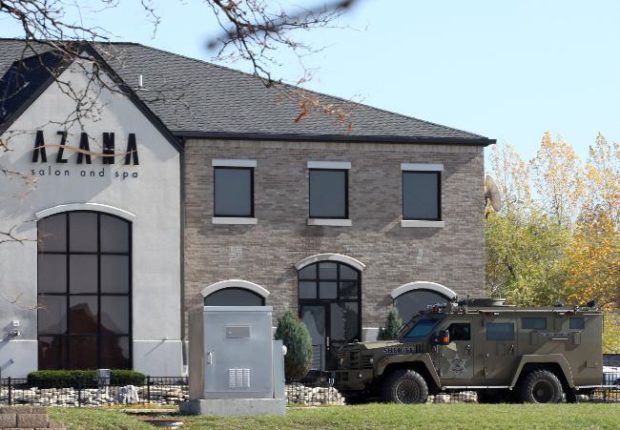 After yesterday’s shooting at a yoga studio in Florida, I am re-posting this article.  Attacks upon group exercise facilities, gyms, and spas all share similar challenges for defenders.  Read up on how you can better defend yourself in these unique environments.

Last Sunday, a man entered the Azana Day Spa in Brookfield Wisconsin and shot seven people.  The man was originally looking for his estranged wife who worked at the spa.  He found her and killed her.  He shot six more women in the spa (with a .40 Glock handgun that was concealed in a backpack) and then killed himself.  There isn’t a whole lot of information that has been released yet, but the following article provides the best account of what happened:

Gunman kills 3 women, wounds 4 others, then commits suicide at Azana Spa in Brookfield 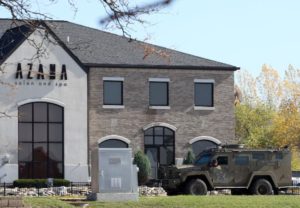 Tragically, this shooting was like so many other active shooter events.  The killers often use the same tactics over and over again because they work.  Even with the limited information currently available, there are a few lessons that a tactician can pull from this tragedy:

1) There is no “safe” place. This was a day spa/hair salon, statistically a very unlikely location for this type of crime. Yet it still happened here.   You don’t get to decide when and where the killer attacks. If you want to be able to defend yourself, you must be prepared at all times.  If you choose to carry a weapon for defensive purposes, you need to carry it everywhere, not just in “dangerous” areas.

2) Revenge wasn’t the sole motive.   News reports in coming days will likely focus on the killer’s rage against his wife and all of the ways he felt he had been wronged.  He may have felt anger and rage against his wife; but why did he shoot all the other people?  The killer here started off by targeting his wife. If his motive was solely revenge, he would have stopped there.  He didn’t.  He shot six more people before killing himself.  It isn’t about revenge.  It’s about notoriety and achieving lasting infamy.  The killer needs a body count to get it.

3) The killer started a fire as a distraction and likely tried to create an improvised explosive device using a propane tank. I talk about the increasing use of explosives in active shooter incidents in all my active killer classes. Here’s another example. If you really want to be prepared for the active shooter event, you’ll need to know a little about bombs and IEDs.  If you need a quick education, see my article All About Bombs. 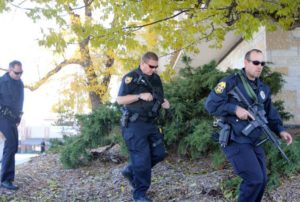 4) The shooter hid his gun in a backpack.  One of the best ways to identify both active shooters and terrorists is to look for out of place luggage.  The killers need some easy way to carry weapons and explosives into the site without being detected.  They often use backpacks, duffel bags, or luggage to do it.  If you see someone carrying inappropriate or exceptionally heavy bags or luggage into an area where it isn’t necessary, your warning bells should be going off.

5) Victims used a combination of tactics to escape the killer.  Some escaped the building.  Others barricaded themselves into a small room.  From one of the articles above:

“They took the massage tables and turned them into barricades against the unlocked door, doused the lights, turned off the piped-in music and crouched in fear in the dark, windowless room for nearly 45 terrifying minutes.

Speaking in whispers on her cellphone, O’Rourke, 23, of Wauwatosa, called 911. At first, the operator told her to leave the building – a two-story, 9,000-square-foot structure carved up into many small rooms. O’Rourke didn’t like that idea.

“I didn’t know where the shooter was,” she said.”

In this incident, both tactics worked well.  I generally recommend escape as a primary strategy if armed resistance isn’t possible.  In this case, I think the women made a good decision by locking themselves down.  They didn’t know where the shooter was and would likely be placing themselves in more danger by running out of the building.  If you don’t have a good idea where the shooter is located and have a room that can be secured, barricading is a viable option.

6) It took six hours to completely clear the building.  Although it seems that victims didn’t have to wait all that time to be evacuated, it is certainly possible.  If you lock down, you may be there for awhile.  Do you have everything you might need?  What about medical skills and supplies?  Those women quoted above waited 45 minutes to be rescued.  If one of them was critically injured in the attack, she may not have survived that long without some medical intervention.  Do yourself a favor and study up on some battlefield medical references.  Learn how to control serious bleeding and how to improvise both a pressure bandage and a tourniquet.  Start your education HERE.

Speaking of equipment, do you have a way to carry your weapon, clothes, phone and car keys when you are in a situation like a gym, spa, or swimming pool?  Take a look at the women pictured below.  I bet they wish they had their shoes and car keys handy.  If you go to the gym, spa, or other location where you are less than fully dressed, make sure you keep these vital accessories with you, not locked in a locker in another part of the building. 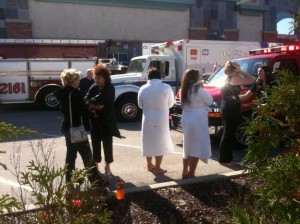 Think carefully about the risks versus the benefits of filing court orders against violent family members.  Be cautious if your friend, neighbor, or co-worker has recently filed such an order.   The time immediately following filing and service of the order is often a dangerous period in the filer’s life.  Encourage your friends and family to tell you if they are in an abusive relationship and if they have filed a court order against their spouse.  Be extra alert for the spouse’s presence in the days and weeks following the filing of the retraining order.

Pay attention to these events and you’ll see the same lessons presenting themselves time and time again.  It’s up to you to learn from the mistakes of others so that you don’t have to experience the lessons yourself.