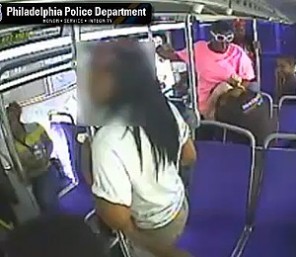 Most violence occurs for a reason.  That reason may not be apparent to the victim or bystanders, but often the action makes sense from the skewed perspective of the perpetrator.

Truly “random” acts of violence are rare, but they do happen.  Whenever I see one documented, I try to learn from it.

Watch the short video below….

Arrest made in SEPTA-bus assault of NewsWorks freelance photographer

In it, a woman on a bus randomly attacks a male passenger.  She beat him with her fists for about 30 seconds and then ran off the bus.  It was quite a strange occurrence.

Now, put yourself in the place of the man attacked.  What would you do?  For the average sized male, lethal force would not be appropriate here.  Do you have some type of less lethal weapon or physical skills that will get you out of this spot?  Sometimes your gun isn’t the best answer for a physical attack.

After you’ve come up with a plan of action from the perspective of the victim, what would you do if you were one of the other passengers on the bus?  Would you intervene?

Have you figured out your plan?  Good.  Now let’s switch some things up….

Same random violence on the bus scenario.  You are not the person being attacked, but a witness.  How would the following factors change your planned response?

– What if the victim was also a female?

– What if the victim was a child?

– What if the victim was the bus driver?

– What if the victim was elderly?

– What if the attacker was a male?

– What if the attacker had a knife?

-What if the attacker had a gun?

-What if the victim pulled a gun in response?

Each of those minor scenario changes could create a very different set of response variables.  Think them all through and come up with a plan!