In this article, well known firearms instructor Larry Vickers describes a shooting drill that he likes to use with his students.  It’s a pretty common drill and it has been ascribed to many people, most commonly Ken Hackathorn. 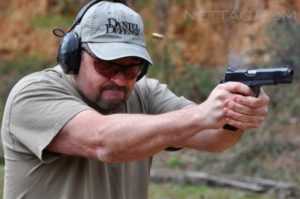 Larry’s version of the drill is easiest.  He uses a B-8 center bullseye (free copy HERE) and fires 10 shots at it in 10 seconds from 10 yards.  His starting position is the low ready.  This should be relatively easy for most shooters to accomplish.

When you are able to pass Vickers’ version of the 10-10-10 consistently, it’s time to make the drill a little harder.  Do the same drill, but this time draw from concealment.  Incorporate a hard lateral movement on the draw.  That should make it a little more difficult, but still possible for a reasonably skilled shooter.

The next evolution is to do the same drill (10 shots, 10 seconds, 10 yards), but break the shots up as follows:

When I did this drill with my police department (who are among the most highly trained police shooters), only about 25% were able to get all their hits the first time through.  It’s significantly harder than the previous versions.  The one-handed shooting and the hand transitions make it pretty easy to blow a shot or miss the time standard.

You can also do this one with a reload instead of the hand switch.  Start with five rounds in the gun and a spare magazine containing five rounds.  Draw, fire five, reload, and fire five more.  I think this version is a little easier than the one above, but your mileage may vary.

For the ultimate challenge, do the 10-10-10 drill from the ready position, but do the whole thing ONE-HANDED!  That bullseye gets awful small for fast weak hand only shooting at 30 feet!

If you are short on time at the range, all of these drills can be combined to create a pretty thorough practice session that covers a lot of skill sets in a short period of time.  You’ll likely spend more time reloading than shooting.  For a fast 100 round practice session, try this:

2) 10-10-10 Drill from the holster (ideally concealed and with movement on the draw).  Repeat one more time.

I like to end most of my shooting sessions by working on a drill that requires concentration and accuracy.  When we shoot fast, we tend to get a little sloppier with our technique.  I don’t want to end the day with a sloppy rep, so I make sure I slow down and fire my final shots of the day with all the accuracy and concentration I can muster.