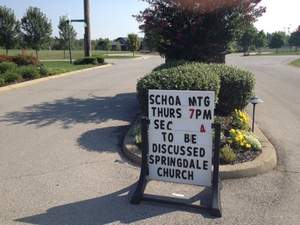 Most of the Active Shooters who are physically stopped during the commission of their crimes are stopped by courageous citizens, not the police.  Often those events are not well publicized in the media.

The trend continued with a shooting in Louisville, Kentucky last Thursday evening.

A man who was angry at his homeowner’s association took a gun to the association meeting (that was held in a church) and shot the association president and one other man.  He was subdued before he could shoot anyone else by a retired police officer who was also attending the meeting.  There is no mention of the retired officer being armed, he likely was not.

Read more about the shooting below:

When citizens intervene in active shootings, most are unarmed and most of these unarmed interventions are successful.   Decisive and violent resistance works.

According to the article above:

It makes me wonder if the second man would have been shot if the rest of those seven people would have acted as quickly as the retired officer.  Read this article by Tim Larkin and see if what he says makes a little more sense in the context of this shooting.  His “swarm” tactic would be ideal in this situation.

Think it through.  If you were unarmed and a man started shooting people within arms’ reach, would you flee, seek cover, or attack?  I generally advocate fleeing in the event you are caught up in one of these horrific events.  But I don’t think that would be the best bet here.  You just can’t get to safety quickly enough when the shooter starts out so close to you.  Your better course of action would be to attack.  Take some time today to think about how you would do it.