I’ve written extensively about the issue of air travel with guns.  I encountered a problem last weekend that I hadn’t seen before.

If you fly with guns frequently enough, you will notice that you can’t check in online or through your airline’s app for the return flight of your round trip if you checked a gun on the outbound leg.

The airlines note in their computer system that you checked a gun going to your destination.  They assume that you will also have a gun on your return home, so that means you must talk to a ticketing agent to declare it.  Because you may need to personally declare the gun and sign the form stating it is unloaded, the airlines won’t let you check in online before your return trip home.

In my experience this policy is universal with all the domestic airlines I’ve flown.

Last week, I flew out to California to hike in some National Parks I hadn’t yet seen.  We flew into San Diego, stayed the night there and then rented a car to drive north.  We hits Desert Hots Springs, Joshua Tree National Park, Sequoia National Park, and the Huntington Gardens In Los Angeles before returning to San Diego for one last night. 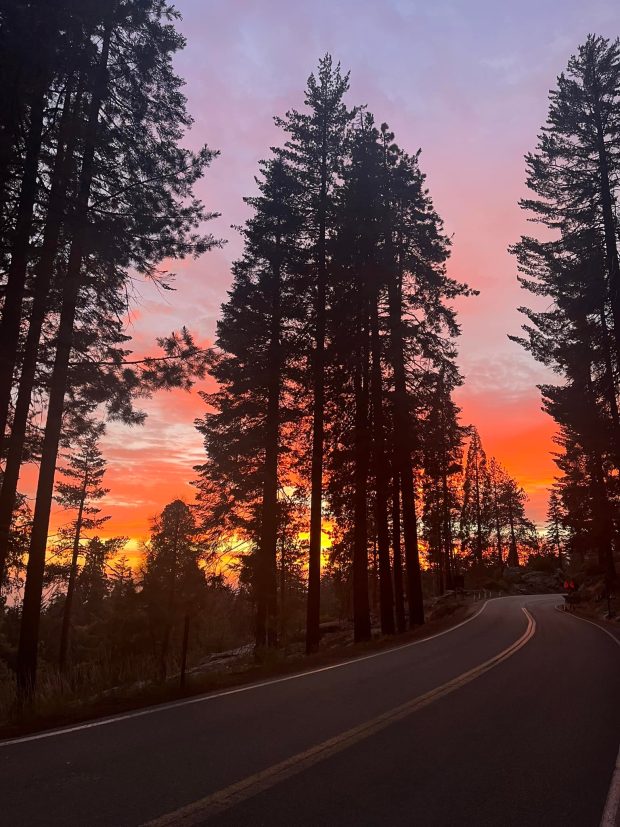 Sunset in Sequoia National Park (no filters or editing)

We had a wonderful experience and were on the beach in San Diego waiting for our dinner reservations on our last night when I got a text alert from American Airlines on my phone.  My morning flight had been delayed.  It was delayed by more than two hours.  I was going to miss my connection.

No problem.  That’s how it is with travel these days (out of 40 flights I’ve taken this calendar year, 29 of them have been delayed or cancelled).  I opened the app to re-book my connection.

The app wouldn’t let me change the flight.  Neither would the website.  Because I had flown in with a gun, they assumed I’d have a gun on my return leg.  I would have to call the customer service number or see a ticketing agent at the airport to make a change.  I called the number.  There was an estimated three hour wait to speak with someone.  I wasn’t going to ruin the last night of our trip waiting on the phone so I hung up and planned to sort it out at the airport the next morning.

Overnight, the airport rescheduled my connection.  That meant an incredibly long layover and an arrival more than 12 hours later than my original flight plan.  I spoke to the gate agent at the airport.  He was great and got me on a standby slot on an earlier connecting flight.  Fate was with me and I made it, only landing four hours later than my original flight plan.

It seems that the check-in is the major issue.  I’ve had flight delays after I had checked in and was waiting for the plane.  In those cases, having already checked in, I was able to change connections on the app.  It’s just the flight home on the round trip if you had checked a gun on the outbound flight that will give you trouble.

It’s an issue you should think about before flying with guns in this chaotic time in the air travel world.

A couple more issues if you are flying through San Diego…

Budget far more time than you normally do when using this airport.  The shuttle to and from the rental car center is packed with lines of several hundred people long.  I arrived mid-afternoon on a Wednesday and returned mid-morning on Sunday.   Despite traveling during off-peak hours, in both cases it took more than 45 minutes just to travel between the airport and the rental car center a couple miles away.  If I had to do it over again, I would order an Uber to take me to the rental car center to skip the half hour queue and the jam packed bus.

On the trip from the rental car center to the airport, the bus drops everyone off at the west entrance of Terminal Two.  That’s where most of the budget airlines fly from.  The larger legacy carriers fly from the east entrance.  That means a 20 minute (if moving quickly) walk to get to your ticket counter if you are flying out of the east end.

When checking guns there, if your hard sided gun case does not have TSA locks, you must accompany the luggage down to the basement for a TSA inspection.  The ticket agent said that process can take up to 30 minutes.  If you have TSA locks on your case, your bag goes on the conveyor belt and you don’t have to wait for TSA.

In a previous article, I debated the relative merits and risks of using TSA locks on my handgun case.  I decided to use the TSA locks.  In this instance I’m glad I did.

I have Global Entry/Pre-Check.  I’m used to moving through security quickly.  Most airports have separate lines for Pre-Check passengers making the process much faster.  In San Diego, all passengers share the same security line.  It’s only after your ID is examined by TSA that you are separated from the herd and get to skip the body scanner line.

I had a hotel two miles away from the airport.  I started my drive to the rental car return three hours in advance of my flight time.  By the time I got the bus to the airport, walked 20 minutes to the correct part of the terminal, got my bag checked, and made it through security, I arrived at my gate only 10 minutes before boarding.

Air travel is rough right now.  I don’t expect it to improve anytime soon.  Budget lots of extra time and arrive with a full tank of patience if you want to survive.