In the course of my 13-year stint as weapons armorer for the police department where I work, I attended numerous AR-15 armorer schools.  Recently, I was looking back at my notes from one of the classes I attended (it was put on by Colt) and thought the information would be useful for anyone who may own an AR-15 rifle.

I wrote down a few bits of information that I had either forgotten from past classes or had never heard.  I think they may be of interest to anyone who shoots an AR-15 or has the opportunity to work on one.  Read up if you fit that description.  These tips may save you some time, money and hassle:

These parts wear out over time and need to be replaced regularly.  Colt has no set replacement schedule in terms of round count, but the instructor noted that he would replace them annually in a gun that is fired extensively.  The most current extractor springs from Colt have a copper colored-wash on them.  They’re cheap.  Get a few and swap them out in your older weapons.  I get mine from Brownells. 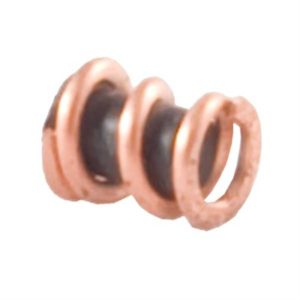 2) Another very common problem with AR-15 rifles is that the bolt carrier key loosens and causes gas to leak from the system.  I’ve personally seen this happen quite a bit in my classes.  It seems to happen more on Bushmaster and DPMS guns than any other brand.  With that said, I’ve even seen some high dollar guns (like a Wilson Combat) with loose or improperly staked carrier keys.

The carrier key is the detached part. If the screws are loosened or become unstaked, you will likely see failures to extract. The carrier key should be tight and should not have any play or movement.

I see the problem so often, that I bought a staking tool to re-stake the carrier key screws to prevent loosening.  If you don’t have the skills to hand stake the screws and don’t want to purchase the machine, the instructor suggested using loctite as an alternative.  Run a thin bead of red LocTite all around the underside of the carrier key before tightening the screws.  The instructor stated that his results doing that were just as good as he had seen restaking the screws.

I still think I’ll use my staking tool, but it’s a good fact to know if I am ever in a situation where I don’t have my tools.

3) Colt rifles are more expensive than most production quality AR-15s.  One of the reasons is that Colt does more magnetic particle testing on its component parts.  A common trick when selling used guns is to swap out an original Colt bolt carrier group with a lower budget alternative.  Colt marks all of its bolts and bolt carriers with the letter “C”, or the letters “CMP”.  If your bolt doesn’t have those letters stamped into it, you aren’t buying a Colt.

4) People are getting better about putting adequate lubrication on the bolt.  Inadequate lubrication is the cause of many AR-15 rifle malfunctions.  The instructor noted that the pendulum may have swung too far, with shooters applying TOO MUCH oil to the bolt.  If too much oil is applied, it can fill the firing pin hole, reducing the striking power of the firing pin.  If you are getting light strikes on your primers, make sure you aren’t over lubricating.

5) People often talk about “Sub-MOA” (shooting less than 1″ groups at 100 yards) AR-15 rifles.  I’ve seen some rifles and shooters capable of such accuracy, but it isn’t nearly as common as the gun forums might lead you to believe.  Do you know what the military standard is for accuracy testing in the M-4?

You might be surprised to find that the military specifications require a 10-shot group fired from a rest at 100 yards to be under FIVE inches!  Colt rifles average two and a half to three inches.  Don’t feel bad if those sub-MOA groups have been eluding you.  Your rifle may not be capable of that level of accuracy.

It pays to have a basic understanding of how your rifle works.  I’d encourage everyone who owns an AR-15 to take some type of armorer’s course.  It’s a skill that is definitely worth acquiring.