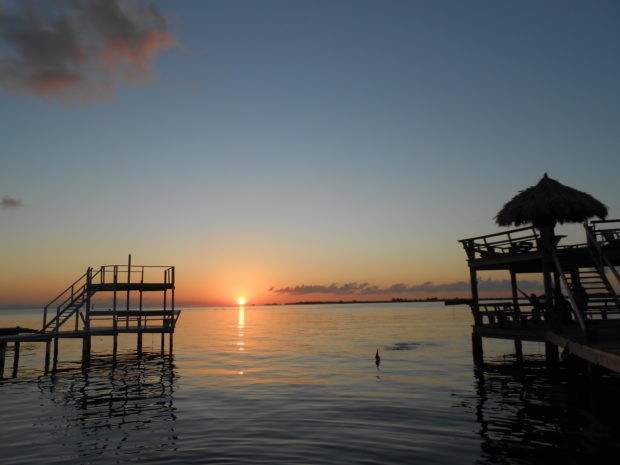 I apologize for the somewhat sparse posting schedule I’ve maintained in the last couple weeks.  I traveled down to Honduras to both celebrate my 40th birthday and learn to scuba dive.  It’s tough finding the motivation to write when I’m hanging out in a tropical paradise!

I spent the majority of my time on a small island (Utila) off the coast.  The island is fairly difficult to get to by North American standards, but was well worth the effort.  With only about 2000 residents, it was a very mellow place with warm water, fresh seafood, and great ocean scenery. 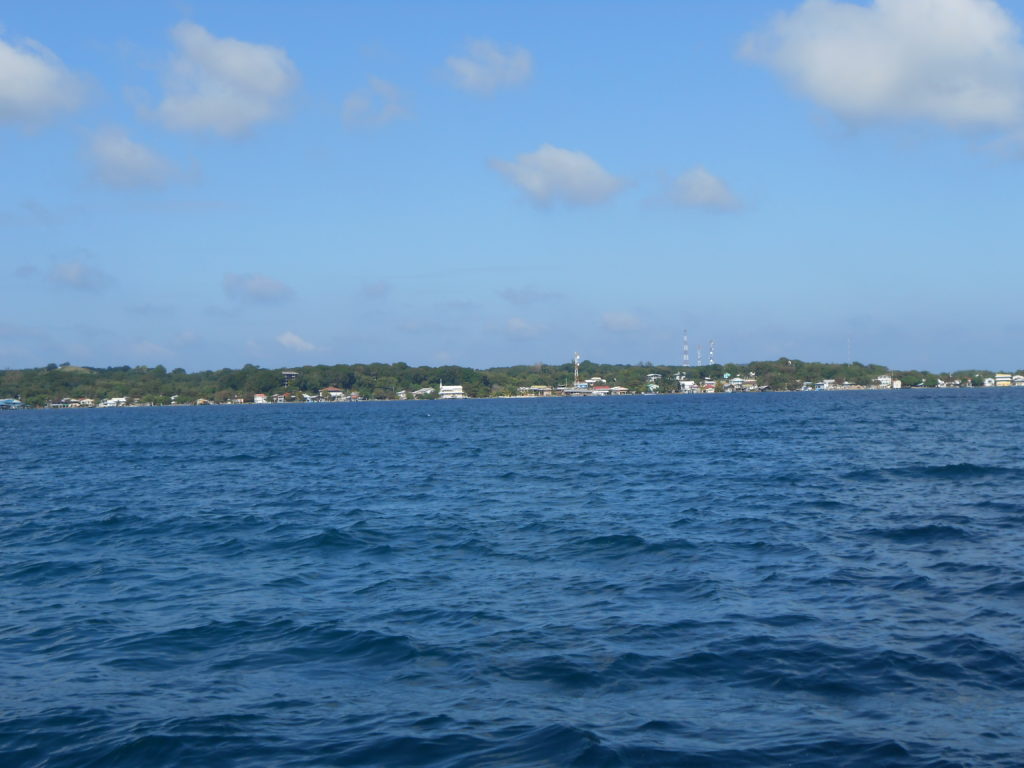 Utila Island Honduras from the Ferry

I also spent a little time in the towns of La Ceiba and San Pedro Sula (the 2011 murder capital of the world).  San Pedro Sula is the home of the Mara Salvatrucha street gang and had 159 murders per 100,000 residents last year.  In comparison, Chicago (which has one of the highest murder rates in the USA) had 34 homicides per 100,000 residents in 2010.

There is a lot of crime and a lot of potential danger in Honduras.  Despite its reputation as one of the most dangerous places in the world, I had no problems at all.  I traveled alone and took only public transportation …local buses, taxis, ATVs, a ferry nicknamed the “vomit express”, and a 6-seater plane that looked like it had its best days in the 1950s.  I had a couple hotel rooms in some fairly dodgy parts of towns where I stayed. 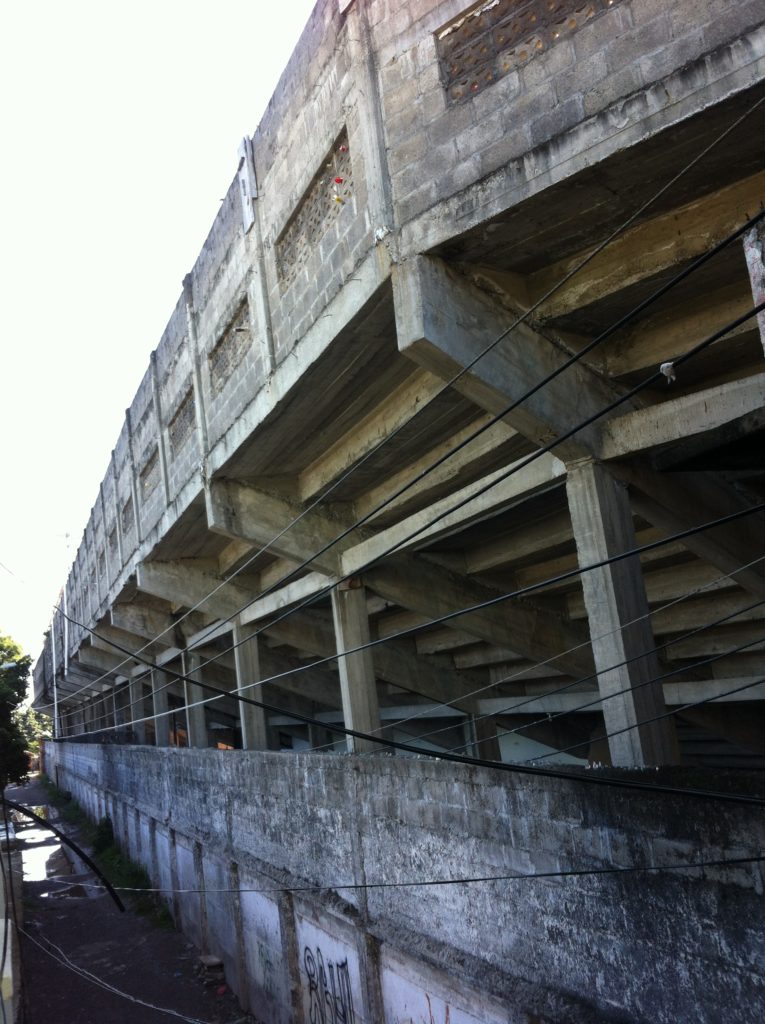 The view from my “deluxe” $17 a night hotel room in La Ceiba. My balcony overlooked the back of the city soccer stadium.

Don’t believe everything you see on television.  Very few residents of foreign countries hate Americans or are looking to victimize travelers.  Having spent significant time traveling on five continents, I can tell you that people from almost every other nation are invariably more friendly and helpful than most of the people I meet here at home.

I talk to the locals as much as I can in all my travels.  I always try to get some information about the local crime trends and tactics the residents use to stay safe.  The advice I received from all the Hondurans with whom I spoke last week holds true for most of the world as well.  The Hondurans told me that if someone stays away from drugs and gangs, the chance that they will be killed is extremely low.  Most of the murders in Honduras are tied in with drug trafficking.   It’s pretty much the same for any big city in America! 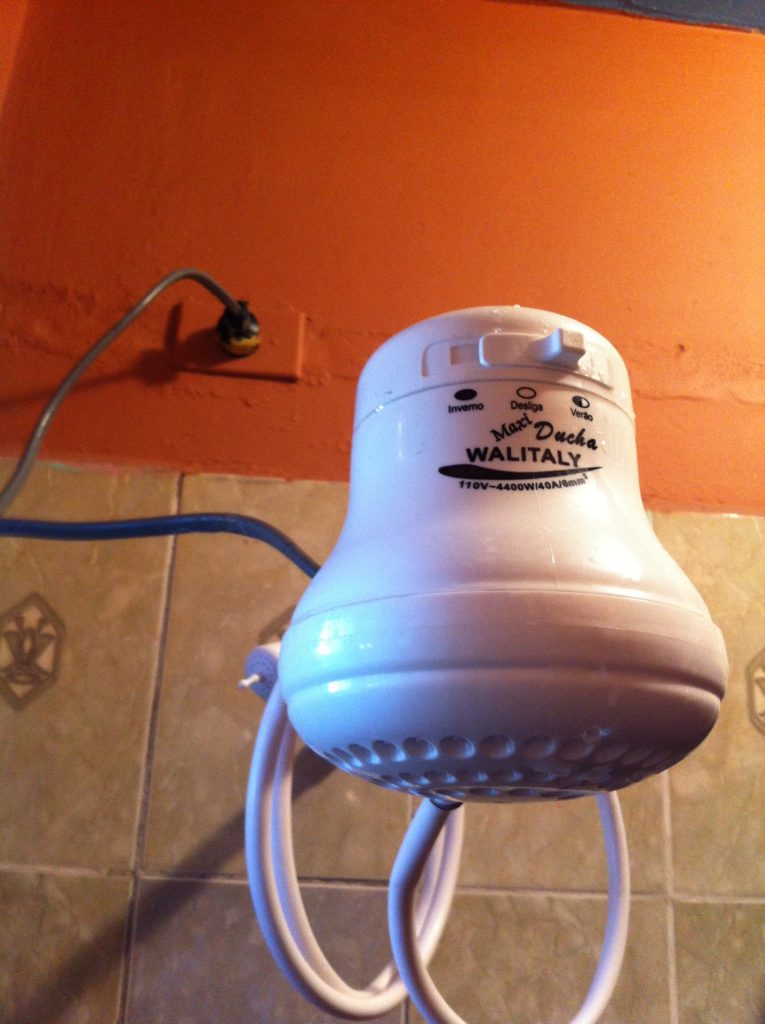 Third world hot water….I love these shower heads that plug into an electrical socket! What a great idea!

I also had some interesting conversations about guns and fighting.  There are lots of guns in Honduras.  In the larger cities, every single retail outlet had an armed security guard standing in front of the door.  Most of these armed guards carried beat-up .38 special revolvers (I saw S&W, Taurus, and Rossi all represented) and no spare ammunition.  If a particular guard was carrying spare ammo, he generally had six extra rounds of lead round nose .38 special ammunition carried in an old-school loop cartridge carrier on his belt.

More lucrative targets (like banks and hotels that cater to wealthy clients) had a greater armed presence.  There would generally be at least one guard with a long gun standing outside.  I generally saw Mossberg pump shotguns and Ruger Mini-14 rifles in the bank guards’ hands.  The guards outside the wealthier mainland hotels had FAL or Galil rifles.  Even the bellhops wore concealed revolvers in one the nicer hotels where I stayed! 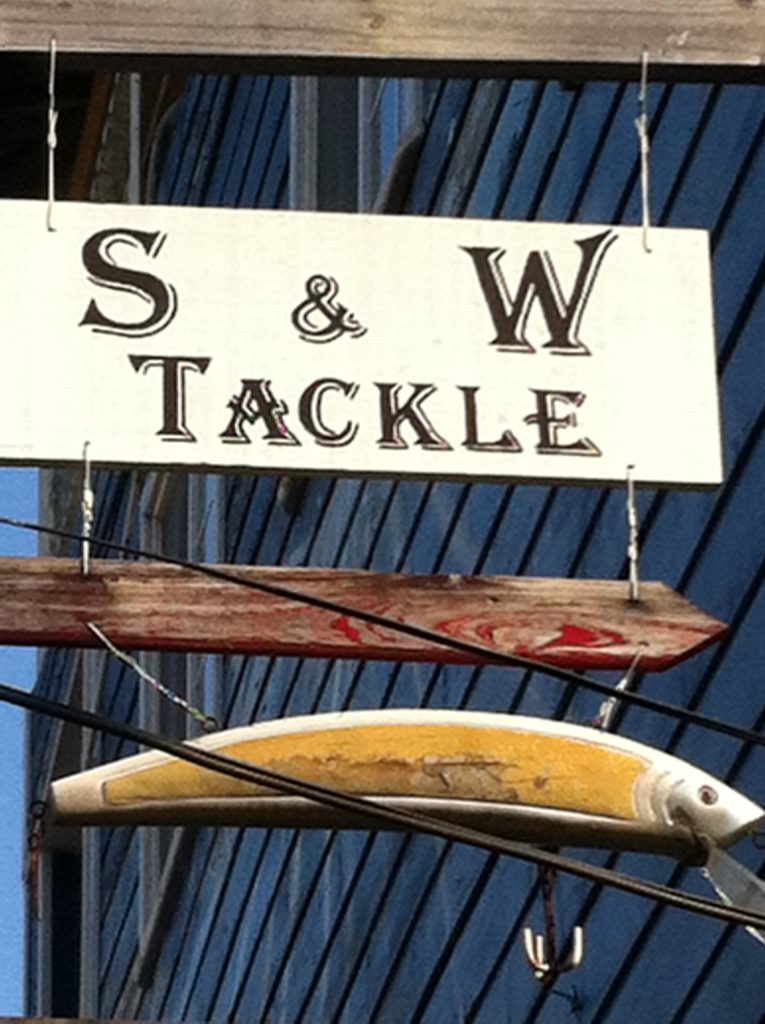 The cops all carried Beretta 92 9mm pistols and occasionally FAL rifles.  The Berettas were carried in every imaginable holster from a cheap homemade nylon leg rig to a Safariland SLS.  On the sleepy little island where I stayed, the cops didn’t carry spare ammo.  In the bigger cities, cops usually had two spare magazines in open top kydex belt carriers.

While I was traveling, the Sandy Hook Elementary School shooting took place.  It was all over the news down there.  On the island, I didn’t have any American TV stations, only local stuff.  The Honduran local news covered the shooting as thoroughly as CNN did here.

The shooting led to some interesting discussions about guns and gun rights.  On Utila Island, it is fairly difficult to legally obtain a firearm.  According to the locals, the first step to getting a gun permit in Honduras is a police background check.  They told me that the cops on the island rarely approved the check.  They don’t want people armed in their little section of paradise.

The locals were quick to explain that the gun control laws didn’t really disarm anyone.  One guy told me “Everyone has a gun.  They just don’t have a permit for it.”  He explained in great detail how they smuggle guns onto the island from the USA mainland.  I won’t reveal the process, but it was quite ingenious and clearly worked.  On the “black market” a cheap 9mm pistol (like a Taurus or KelTec) costs around $1000 US dollars.  A Glock or Beretta would be about the same price down there if legally acquired with a legitimate permit.  Guns are expensive there due to high import taxes, but it was obvious that many Hondurans believed they were a necessary purchase. 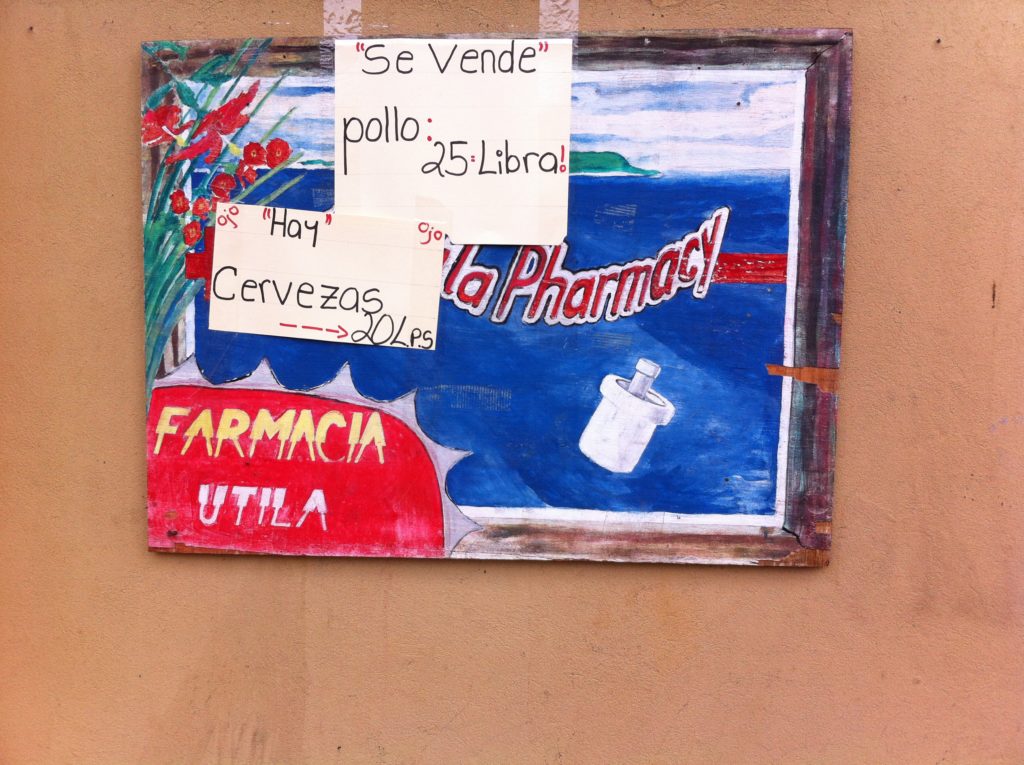 You can’t legally buy a gun on Utila island, but the island’s only pharmacy also sells beer and chicken!

As long-time readers know, most of my blog posts are related to firearms and tactics.  This particular post doesn’t fit with my usual fare.  With that said, I think the stuff I write about in this post is just as important as any of the other articles I write 3-4 times a week.

Many of my readers are extremely serious about developing the skills they need to protect themselves.  I am too.  But I recognize that sometimes a constant focus on self-protection can lead to an obsession with “safety”.  Being overly “safe” will keep you away from some of the best experiences you might ever be able to have on this planet.

Don’t obsess over the advice on this page or any of the other great firearms/self-defense websites out there.  Be smart.  Read.  Learn.  Prepare.  But then go out and LIVE YOUR LIFE!  Have some fun.  Engage in a passion other than fighting or shooting.

I consumed a large part of my younger years with every waking moment devoted to learning, practicing, and studying the fighting arts.  My dedication created an excellent skill set but I really wasn’t happy.  What good is a defensive skill set if the only thing you can defend is the boring life that you don’t truly enjoy?

You don’t have to travel the world and do all the crazy things I like to do.  Just find something you enjoy outside of the fighting arts and make it a point to devote a greater amount of time pursuing that enjoyable hobby.  Allow yourself to find and cultivate ALL of your passions.

Last year I spent more than six weeks traveling outside of the country doing all the things that I enjoy.  I made it to five new countries (Thailand, China, Singapore, Colombia, and Honduras) as well as a repeat visit to Mexico.

I learned to scuba dive, paraglided off a mountain in Medellin, Colombia, camped on a beach in Thailand, rode my first overnight train, and saw some amazing Buddhist religious artifacts.  I ate incredible food and met dozens of new friends from all over the world.  Next year, I will do even more. 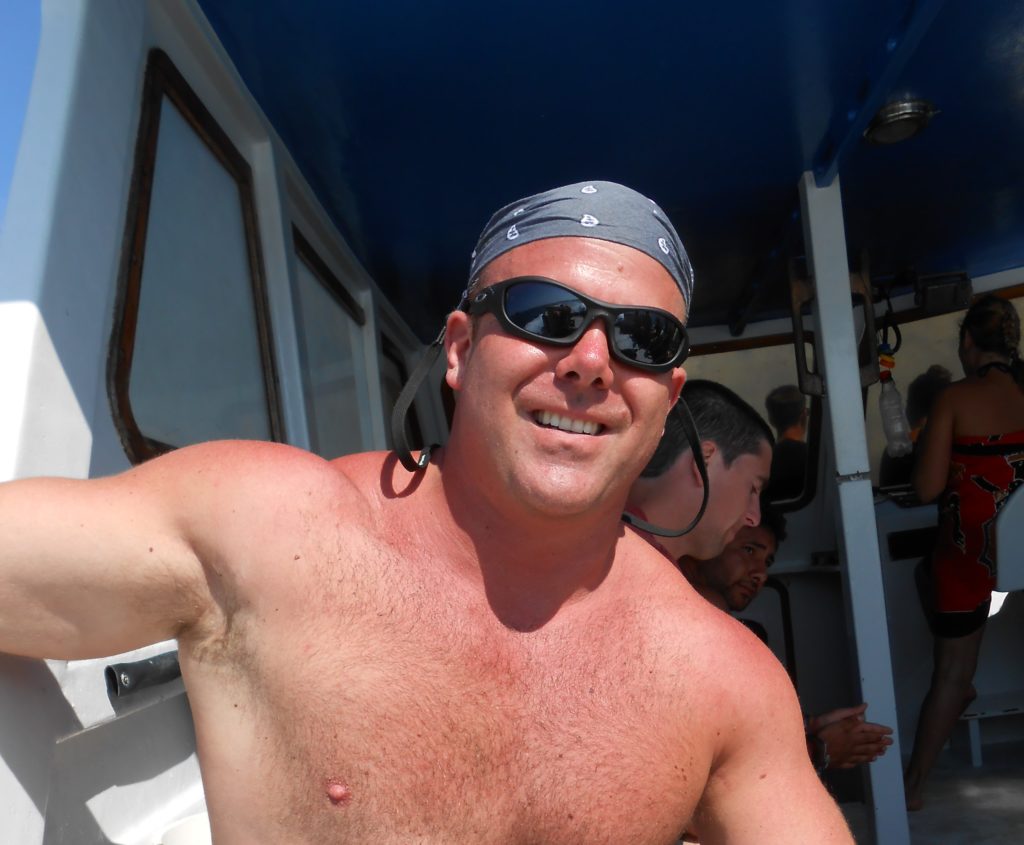 On the dive boat

For your “tactical” homework assignment this week, I want you to forget about guns, shooting, and fighting for a couple days.  Take that time to plan out how you are going to have more fun and live a better life in 2013.  In the long run, those few days off from the gym, the dojo, or the range will do wonders for increasing your quality of life.

Thanks for bearing with my altered writing schedule in the last couple weeks.  I will be back to my regular article posting schedule on Monday.  Have some fun this weekend! 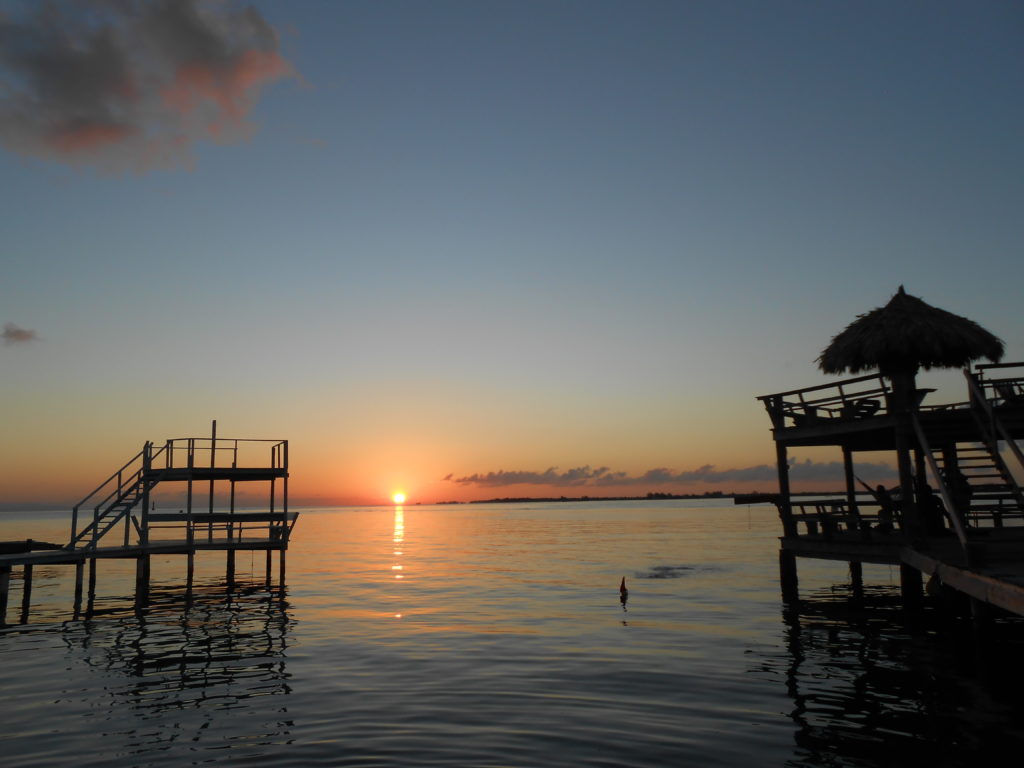 Sunset from right outside my room on Utila. Getting to see this every evening for a week made up for the crappy view of the city soccer stadium I had at the other hotel!