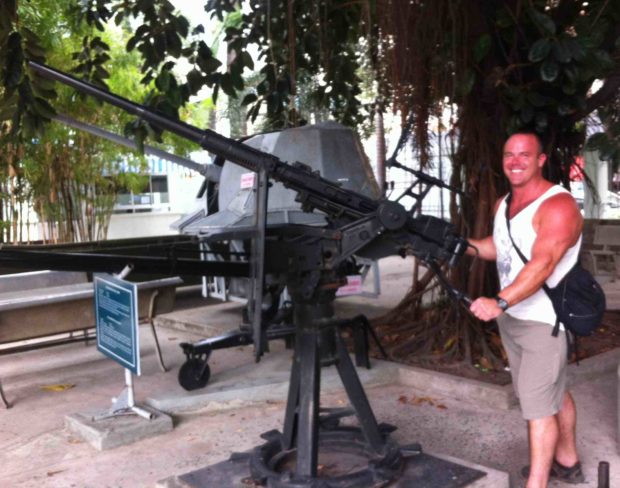 I just got home from an amazing 22-day trip through South East Asia.  Last year I visited Thailand and really liked it, so I wanted to see more of Asia.  This trip took me through Vietnam and Cambodia and ended up in Thailand.  It was one of the best trips I’ve taken in my life.  The trip included all kinds of cool activities like hiking, sea kayaking, motorcycle tours, water buffalo rides, cave rappelling, ATV riding, and visiting various temples and ruins.  I could write for hours about the fun stuff I did, but I’ll focus on the gun/fighting/training stuff that most of you are here for…

I started out in Hanoi and spent a few days in the city.  I visited the famous “Hanoi Hilton”, the prison where American POWs were held during the Vietnam War.  It was quite an interesting demonstration of communist propaganda.  Every exhibit talked about how well American POWs were treated during their stay.  It didn’t quite jibe with the history books I’ve read.

After leaving Hanoi, I made a stop at the world famous China Beach, near the city of Da Nang.  Da Nang is one of the cleaner cities in the country.  The cops there have an interesting way of handling beggars and vagrants.  The police place a $10 bounty on beggars and homeless people!  If a citizen notifies the police and identifies a beggar, the cops give him $10.  The beggar is arrested and forcibly taken to an “education center” where he is held and taught a skill that makes him employable!  I wonder how that would work in the USA? 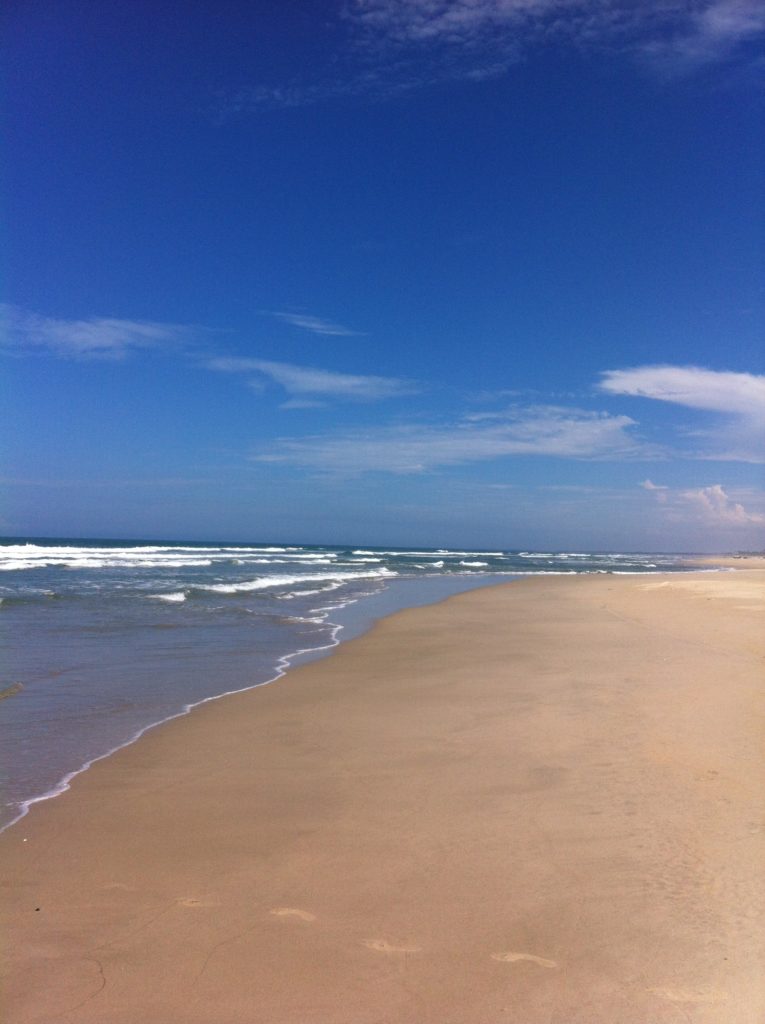 The propaganda indoctrination continued when I reached Ho Chi Minh City (Saigon) and visited the “War Remnants Museum”.  Three floors of exhibits showing how evil the Americans were during the war.  I can’t disagree that some horrible atrocities occurred there, but the presentation was pretty one sided and not the most historically accurate.  Here are some pictures to show you what I mean… 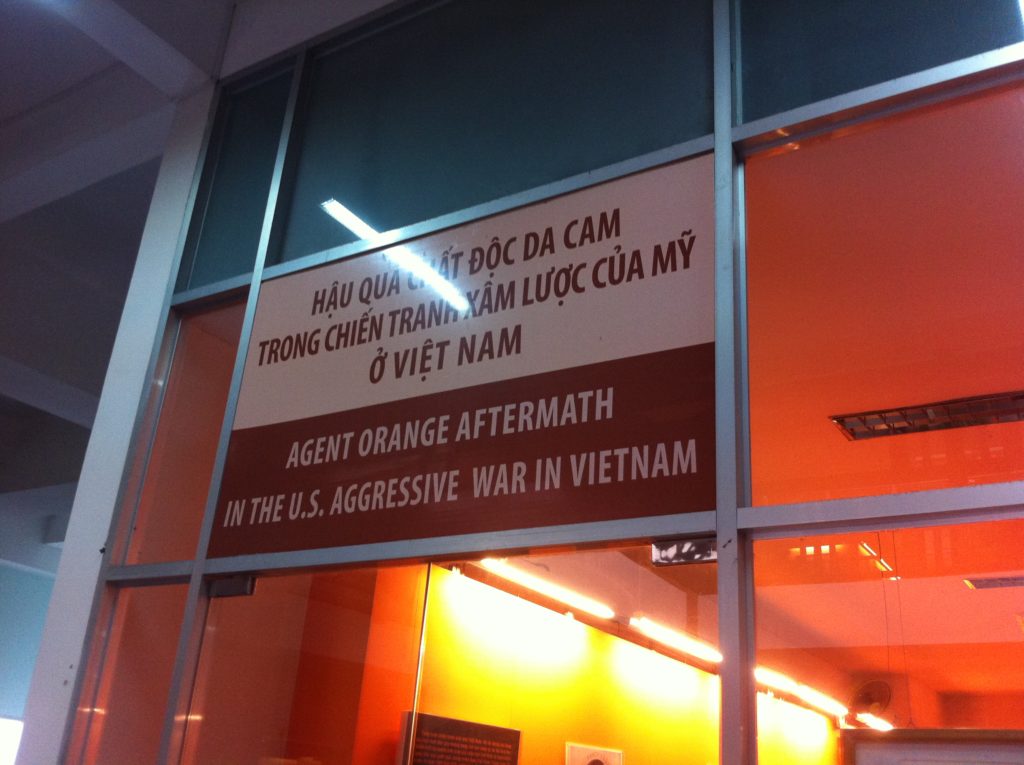 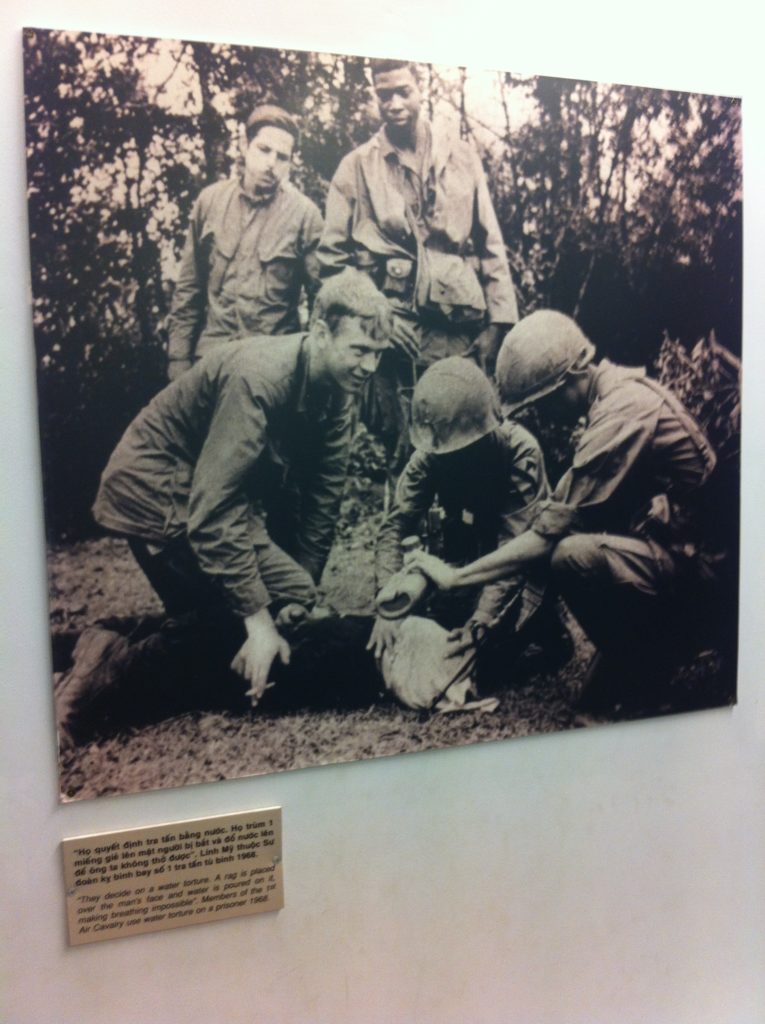 Photo of US soldiers using water torture against a “Vietnamese Patriot”. I actually thought waterboarding was a relatively recent invention… 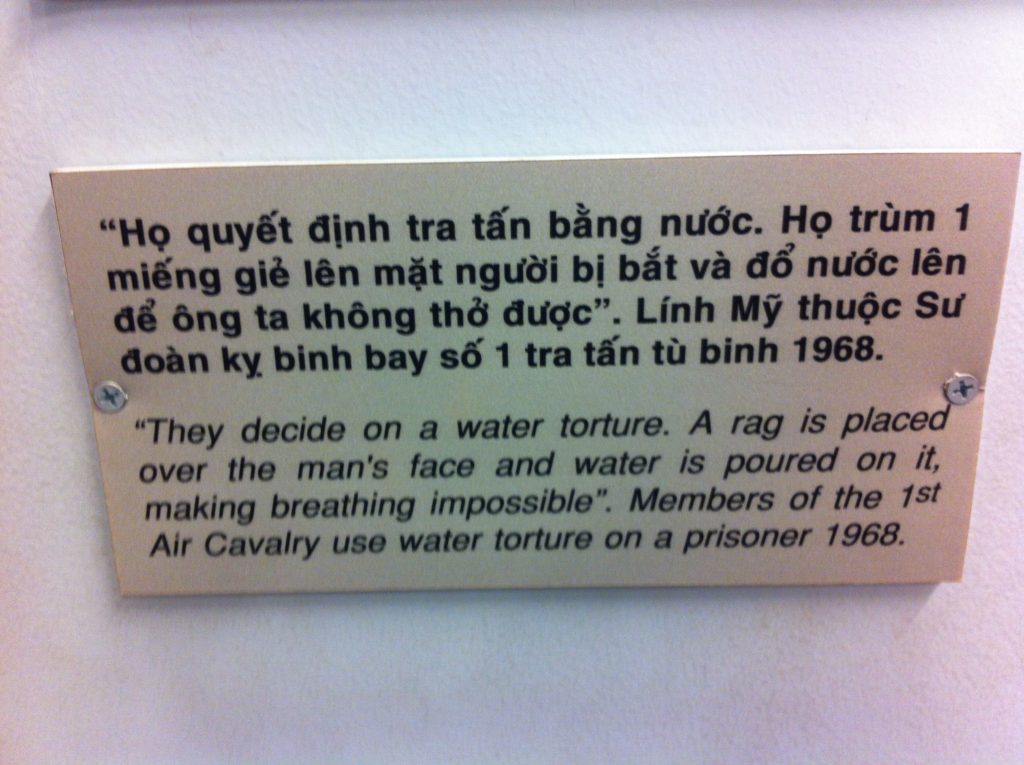 Caption for the photo above…

Besides the blatant propaganda, there were quite a few historical inaccuracies.  There were displays of CS tear gas grenades (that the soldiers used in tunnels) labeled as “deadly chemical weapons”.  The displays of American firearms were comically inaccurate. 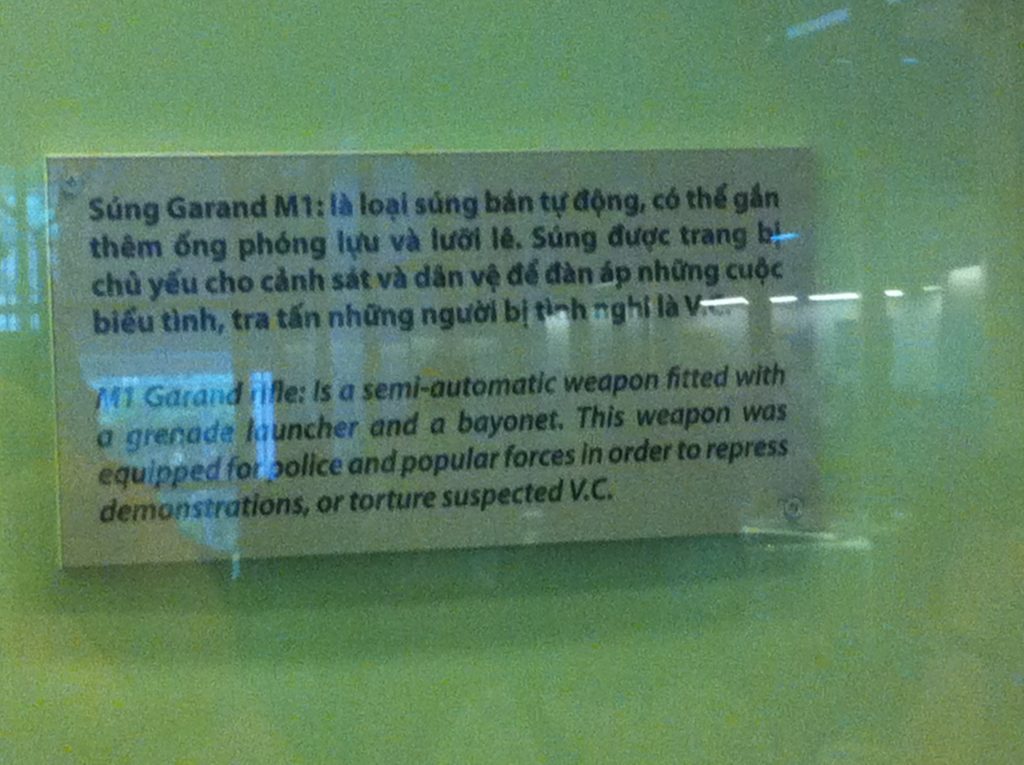 Did you know that the M-1 Garand was used to “repress demonstrations or torture suspected V.C.”?

Once I got over the obvious political slant, I found the museum to be quite interesting.  If you get to Saigon, it’s well worth your visit.  For what it’s worth, even though I was obviously a westerner, I experienced absolutely no animosity from the Vietnamese people.  They were incredibly friendly and candid in our conversations, even those who lost relatives in the war.

As far as guns go, I only saw one gun being carried in Vietnam the whole time I was there!  It was an MP-5 being held by a local guard employed to protect the US Embassy!  The uniformed cops there didn’t carry guns, only black and white striped batons. 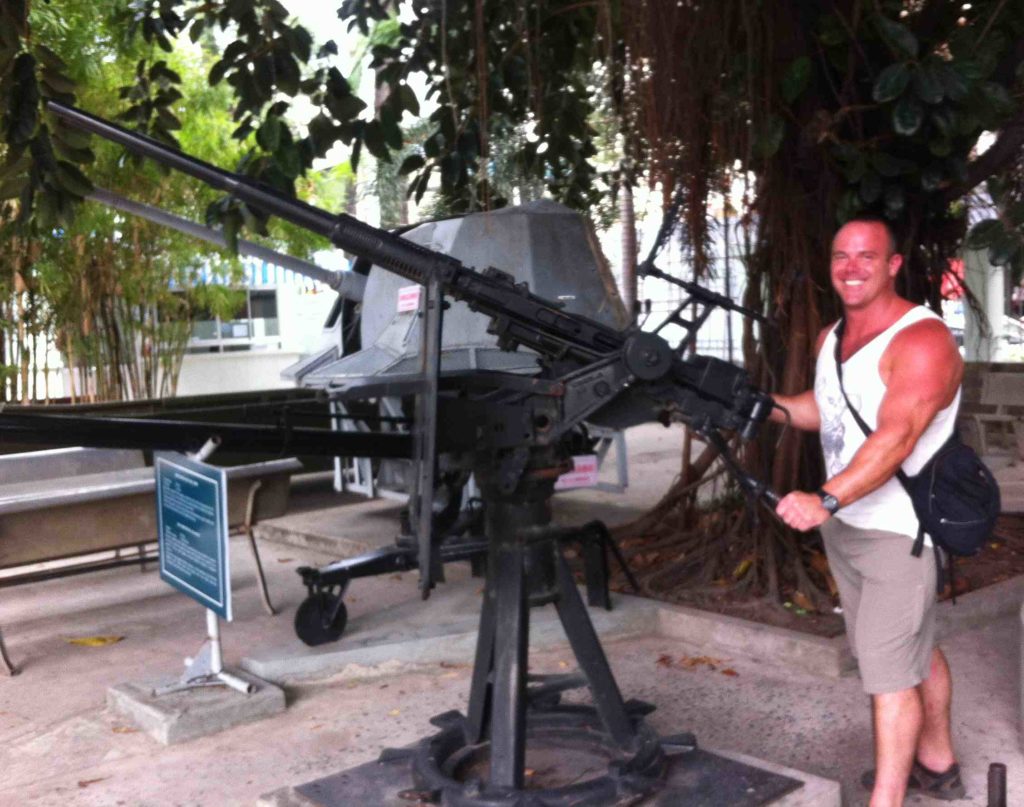 One of the few guns I saw in Vietnam! Playing with twin 20mm antiaircraft guns at the war museum. This would be a great suggestion for anyone looking to buy me a birthday gift!

Also in Saigon, I toured the famous Cu Chi tunnel complex and museum.  This was a huge facility that showed how the V.C. lived underground.  Actual sections of the original tunnels were available for walk (or crawl) through.  Those tunnels were incredibly small and hot.  I could barely fit into the largest tunnel and it was about 4x the diameter of the smallest one!  I really don’t know how people lived and worked in that environment so long. 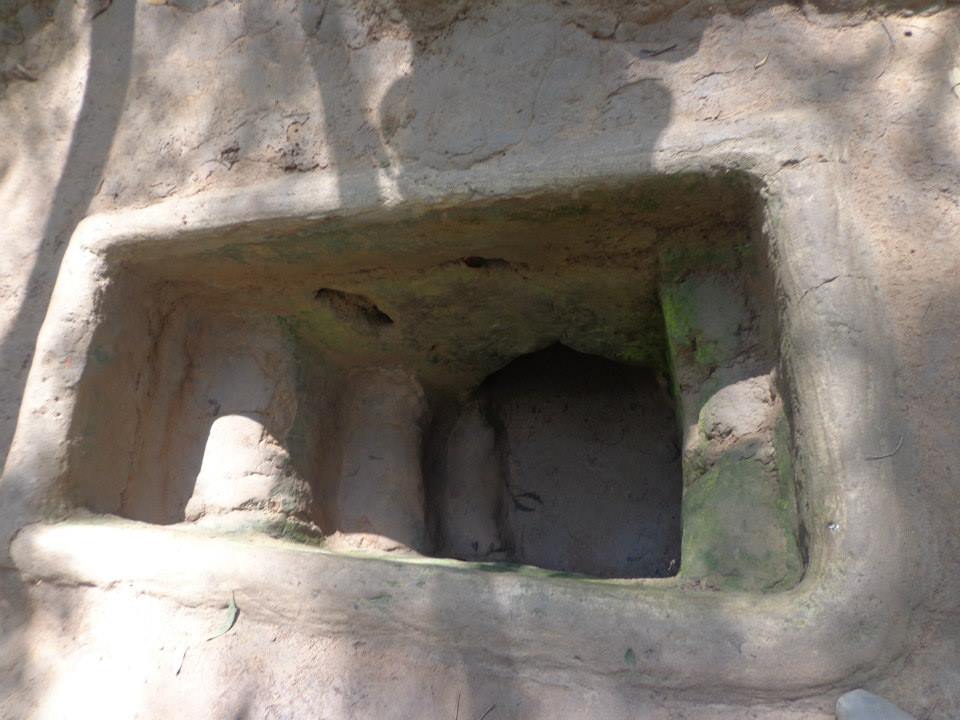 Entrance to one of the largest tunnels 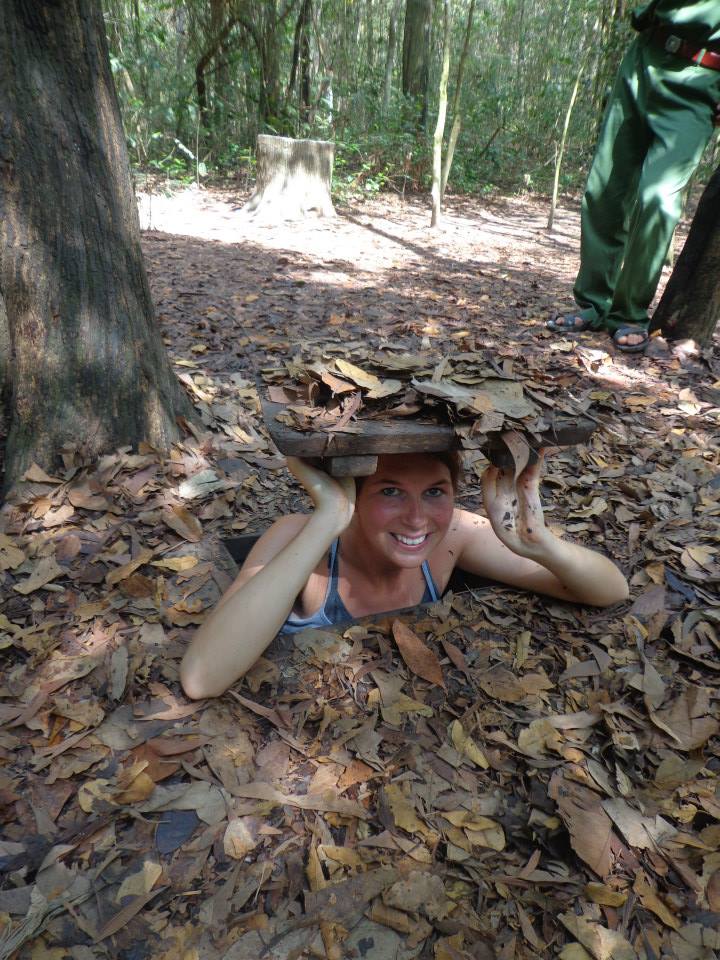 One of my friends popping up from a camouflaged tunnel opening in the jungle. It’s easy to see how difficult it was for us to locate the hidden tunnels

Within the Cu Chi complex there was also a shooting range!  You could fire most of the weapons used in the war…kind of.  All the guns had the muzzles bolted to the bench so they couldn’t be moved away from a safe direction!  That was probably a good thing after seeing how some of the Chinese tourists who had never fired a weapon attempt to shoot without supervision! 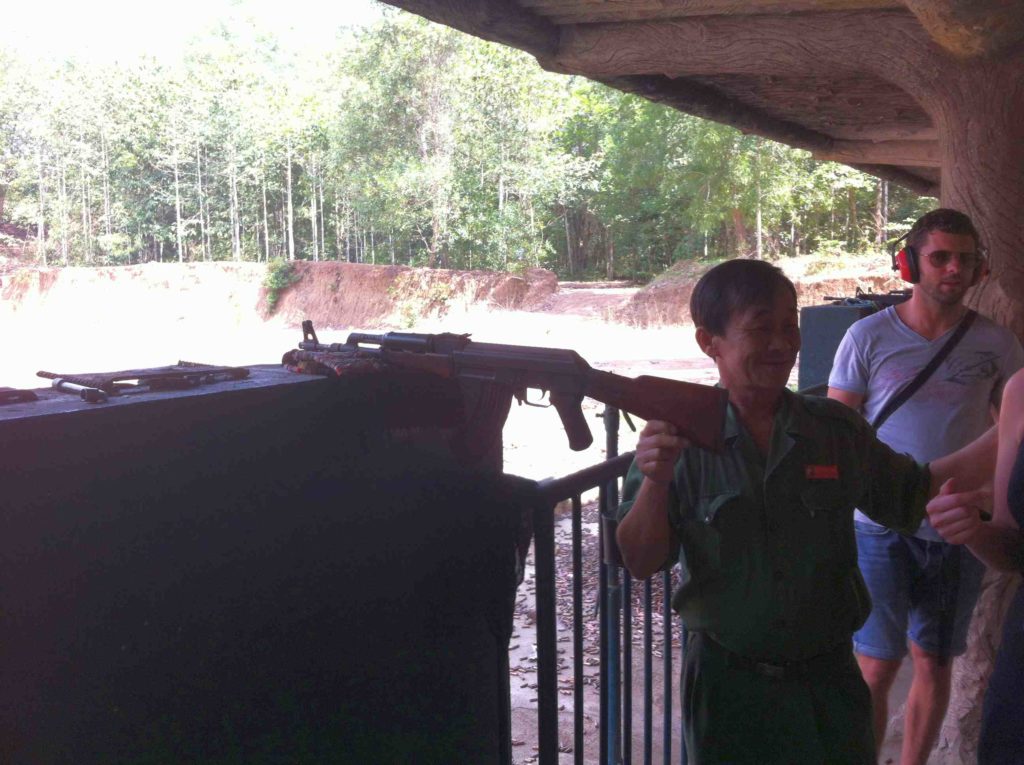 A bolted-down AK-47 on the range 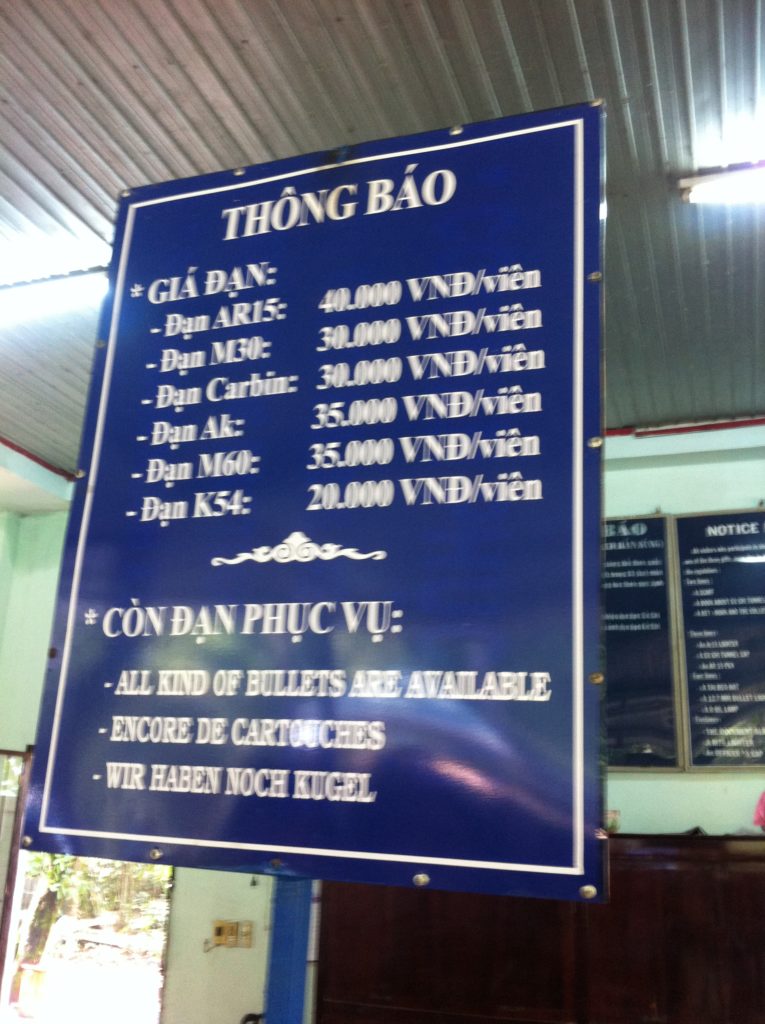 You thought ammo prices were bad here? This is the price list at the shooting range. Exchange rate is roughly 20,000 Vietnamese Dong to the dollar.  That’s $2 a bullet for .223 ammo.

After Vietnam, we crossed the border into Cambodia.  I spent a couple days in Phnom Penh.  That was the only city where I saw cops with guns.  A few carried Makarov pistols in full flap holsters (with no spare ammo).  The others were armed with AK-47s in poor condition.  Check out the local cops’ muzzle discipline and weapon retention… 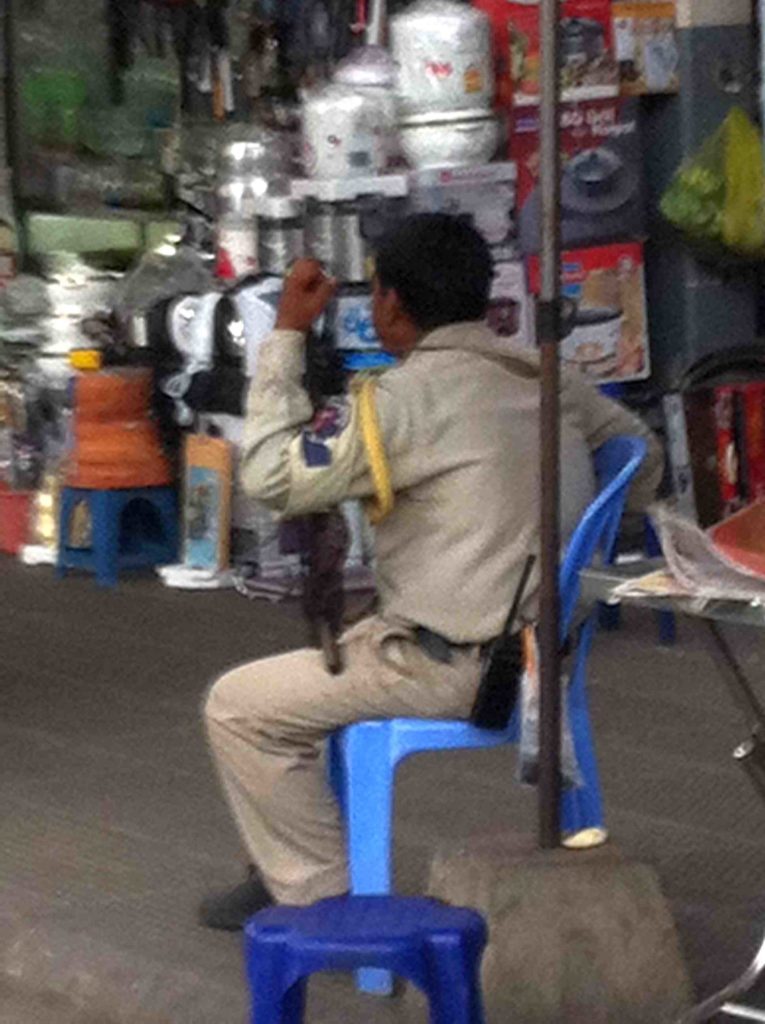 The “cover the muzzle with your hand” position. 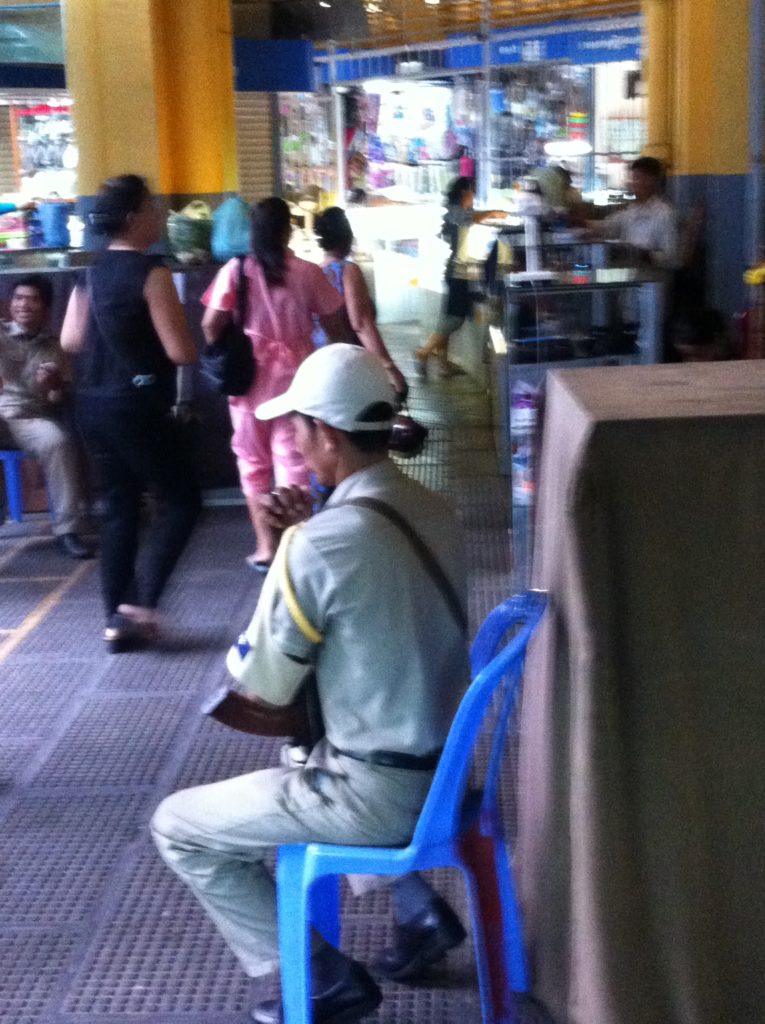 That position must be taught in the academy.. 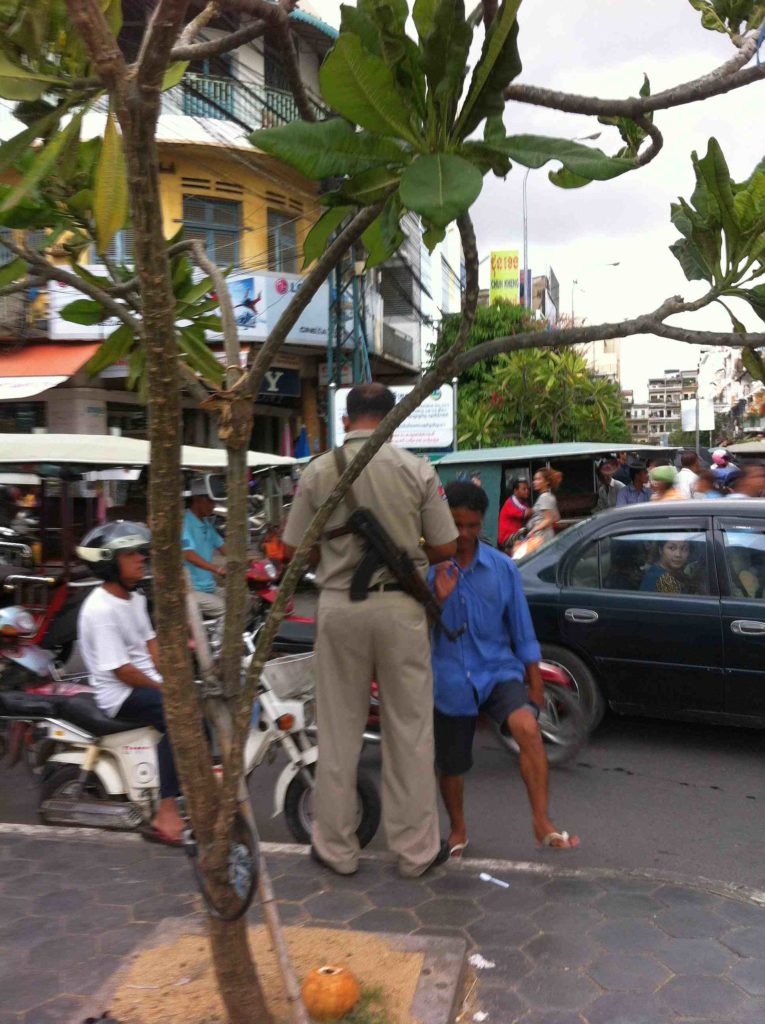 How most of the cops carried their guns…

The word on the street was that the Cambodian cops were universally corrupt.  They get paid about $70 US a month and are forced to supplement their incomes through bribes.  The going bribery rate to avoid being arrested for just about any crime was $5.  Tourists generally pay more.  I didn’t have any problems with the cops because I avoided all contact with them.  When in a third world country, nothing good can come from an interaction with a local cop.  It’s best to do what the locals do and avoid all possible contact!

While there, I visited both the S-21 prison and the “Killing Fields”.  For those of you unfamiliar with those places, a quick history lesson is in order…

During the 1970’s a dictator named Pol Pot rose to power in Cambodia.  He attempted to rapidly transform the country into an communist “ideal” agrarian paradise.  He forced all city dwellers into the countryside to grow rice for the good of “the people”.  The cities were deserted, except for former schools and monasteries.  Those were turned into prisons and torture chambers for political dissidents and intellectuals.

After the prisoners were tortured for several months in the prisons, they were sent to the “Killing Fields” where they were killed by being struck in the neck with bamboo rods.  Their bodies were piled into shallow mass graves.  In just a few years’ time, Pol Pot killed almost two million innocent Cambodian citizens.  It was quite sad to see the remnants of his regime. 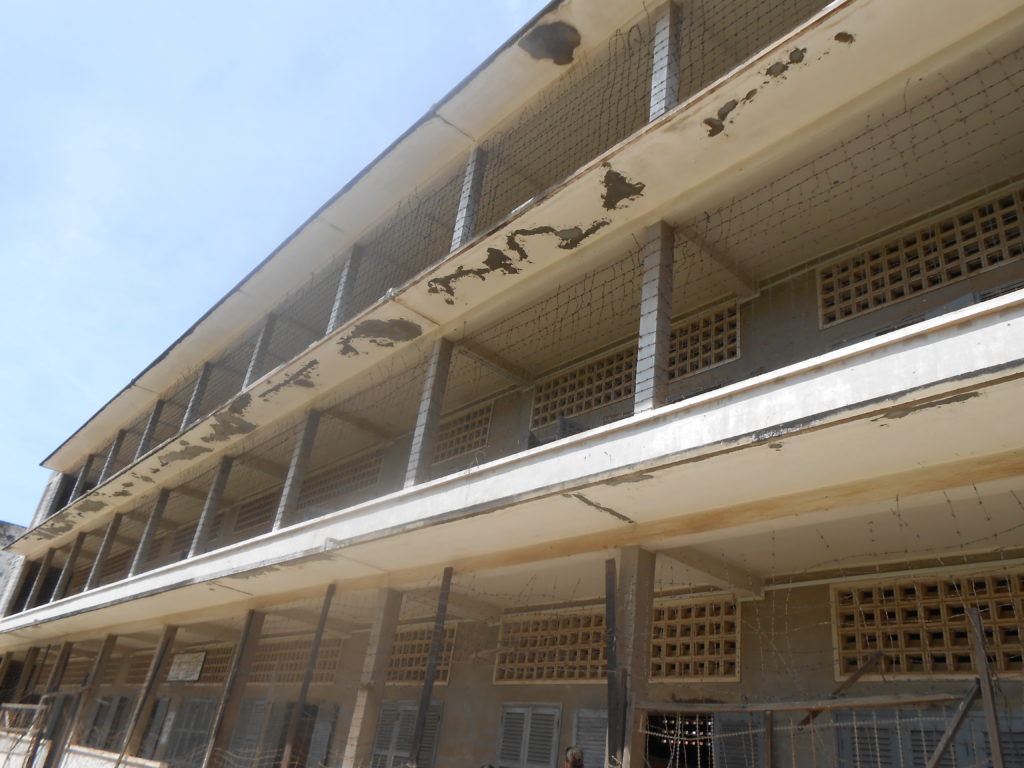 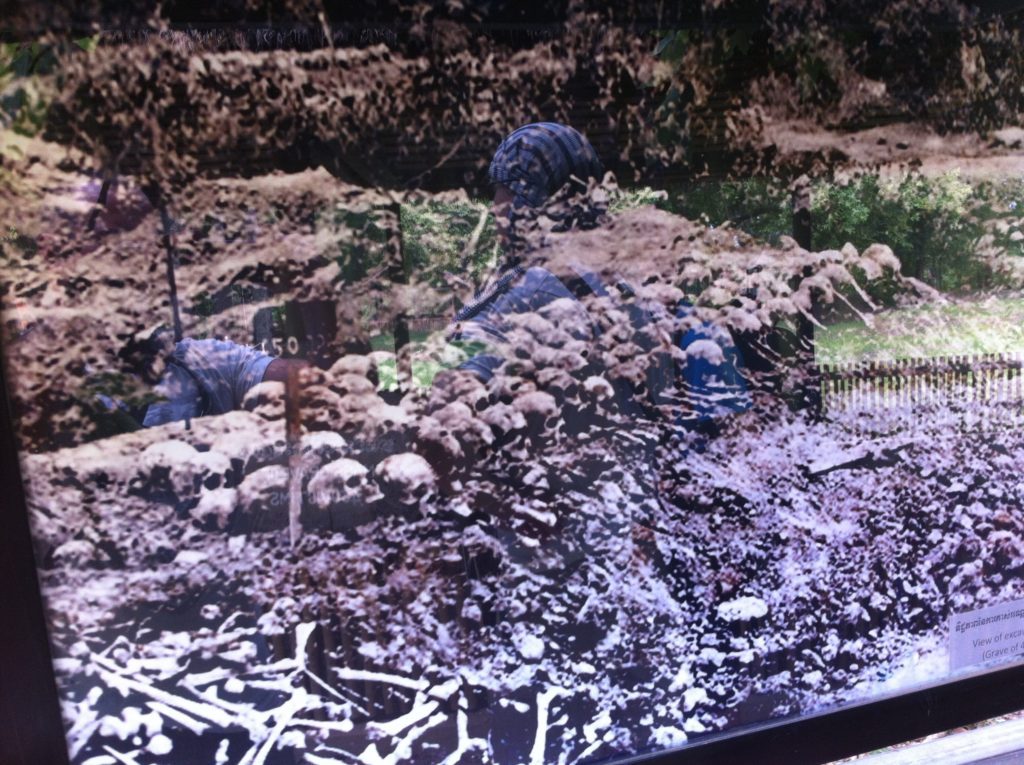 A photo documenting the excavation of the killing fields. 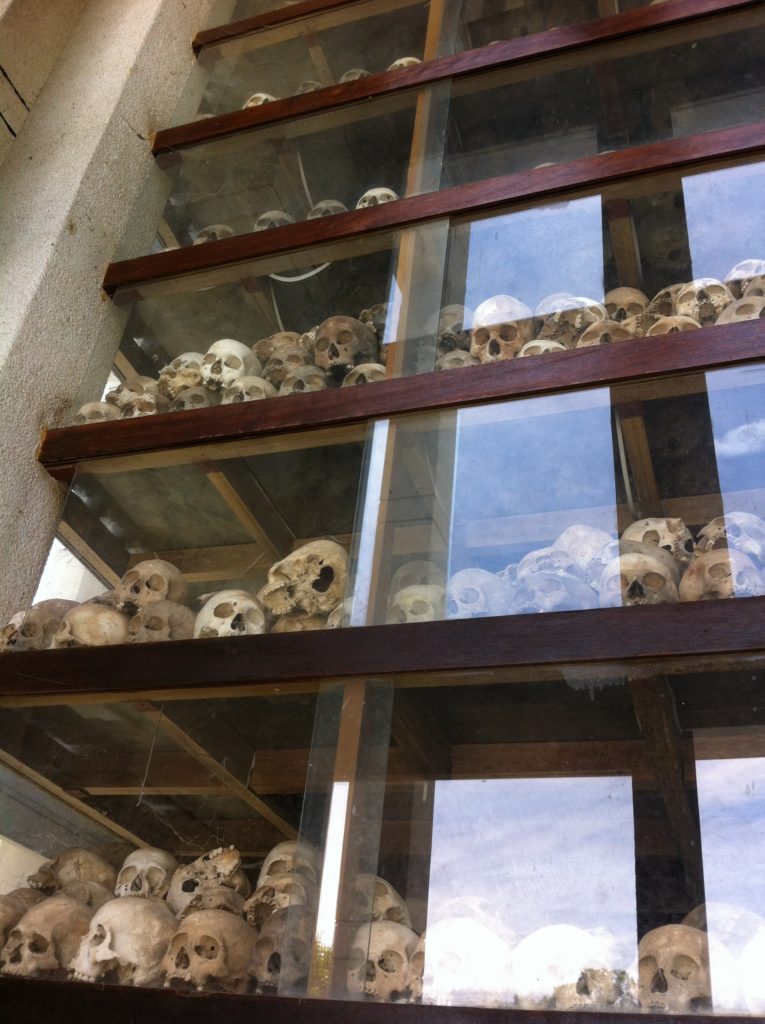 Genocide monument filled with skulls excavated from the graves of the killing fields.

While touring the Killing Fields, I got into a gun discussion with the local tour guide.  He explained that citizens were not allowed to own guns in Cambodia and that’s what makes his country so safe.  I asked him about how the citizens could protect themselves from another Pol Pot-type dictator if they were unarmed.  The guide had survived the Pol Pot regime, although both his father and mother had been killed in the fields.  He seemed truly perplexed by the question.  It seems that the spirit or idea of resisting tyrannical government isn’t common among the Cambodian people, even those who had personally experienced genocide.  He had no answer for me, just repeating that his country was “safe” because no one but the police and soldiers had guns.

I don’t know…two million people killed by their own government in just three years doesn’t seem too “safe” to me!

I had another experience that showed me how the guide wasn’t quite correct in his assumption that people couldn’t access guns.  I’ll write a separate post about this experience next week, but I was able to purchase and fire an RPG in less than two hours’ time!  The people here can get guns (and grenades, and RPGs), it just takes a little money! 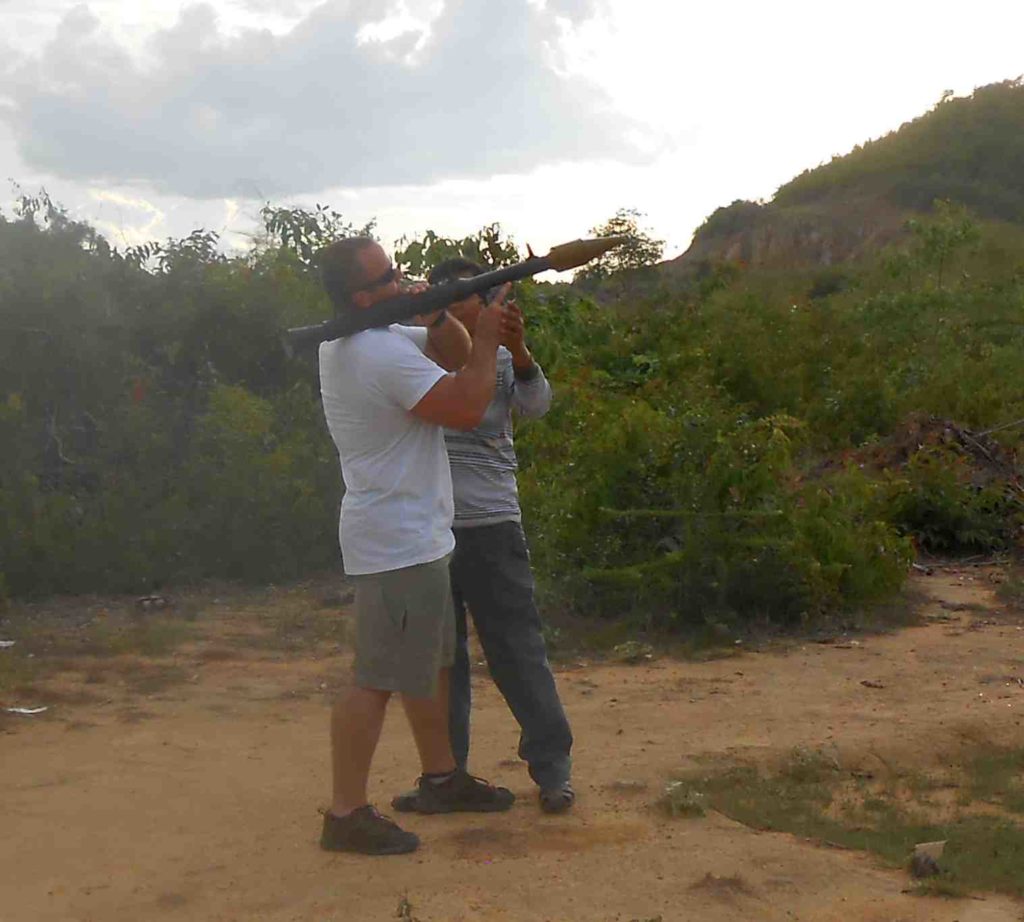 Me, preparing to fire an RPG that I bought on the black market for $350. Come back next week for details…

After seeing the prisons, torture chambers, graves, and photos of mutilated babies, it was time for a change.  I moved on to Siem Reap and spent a day at the amazing Angkor Wat Temple complex.  It provided a much needed psychological respite. 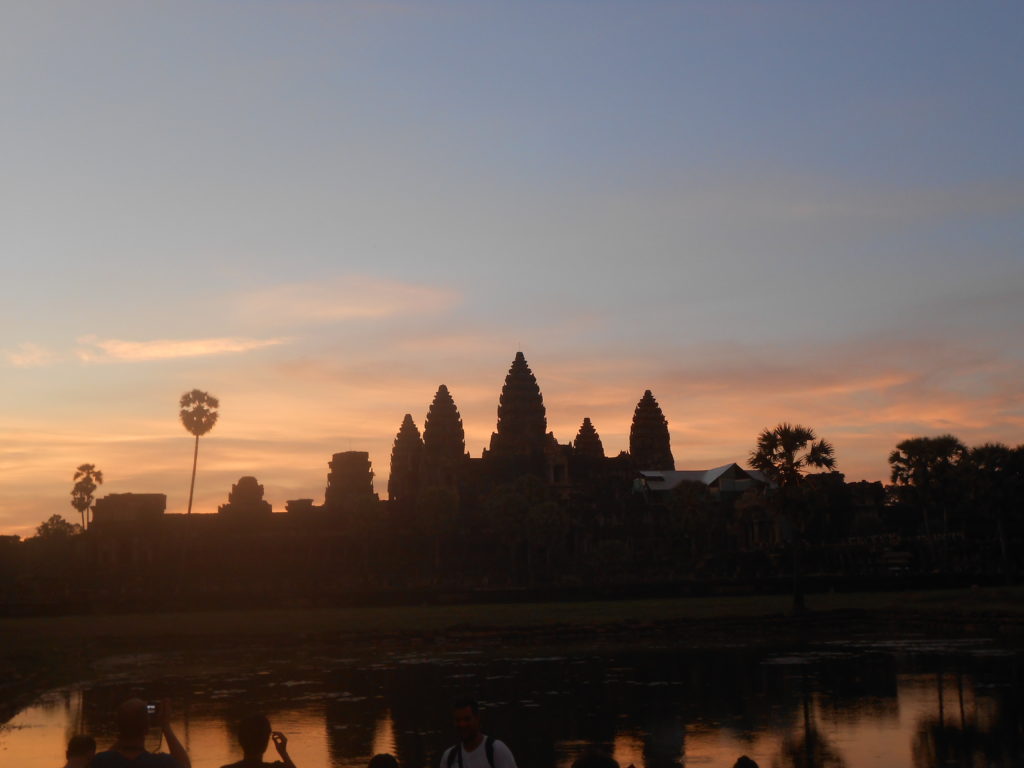 The trip ended in Bangkok, Thailand.  While there, I couldn’t miss watching a few Muay Thai fights.  I went to the world famous Lumpinee Boxing stadium and got ringside seats for 10 fights.  If you’ve never seen a Thai fight, it’s an amazing experience!  People screaming, locals playing fight music and a sweaty boxing arena combine to provide some great entertainment! 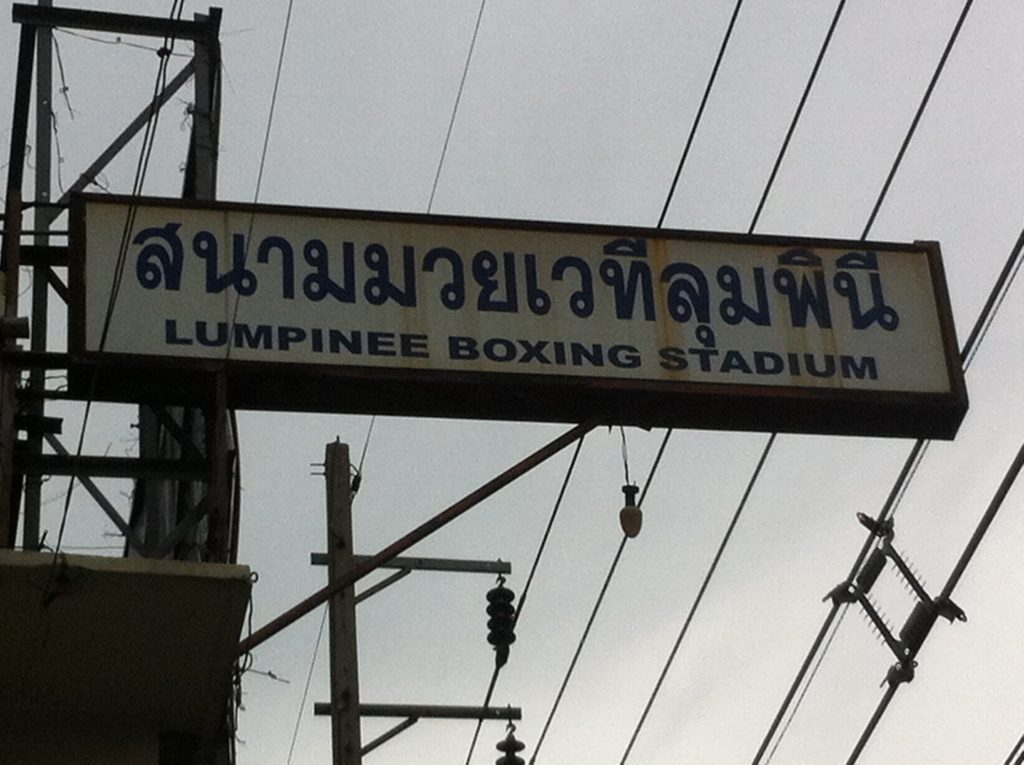 It may not look too impressive, but it’s one of the best known Thai boxing arenas in the world.

I know Vietnam, Cambodia, and Thailand aren’t in most of my readers’ vacation plans, but they really are amazing countries.  I never felt the least bit unsafe at any time.  The people were some of the friendliest in the world and I will treasure the experiences I had visiting those countries.

The world is full of opportunities for excitement and fun.  I think a lot more people in the “tactical” community should make an effort to seek out some adventure and get a different perspective on life instead of spending their money buying yet another AR-15 rifle.  Not everyone is out to kill you.  Spending time unarmed in a third world country without knowing the language or customs hones your social skills and protective instincts better than any tactical class you can take.

In the end, adaptability to unknown circumstances, maintaining your composure under stress, and knowing how to socially interact with people from different cultural backgrounds are the best “tactical” skills you can master.  Those skills are acquired easier through third world travel than by any other method I’ve discovered.  It’s a big world.  Don’t be scared.  Go out and have some fun! 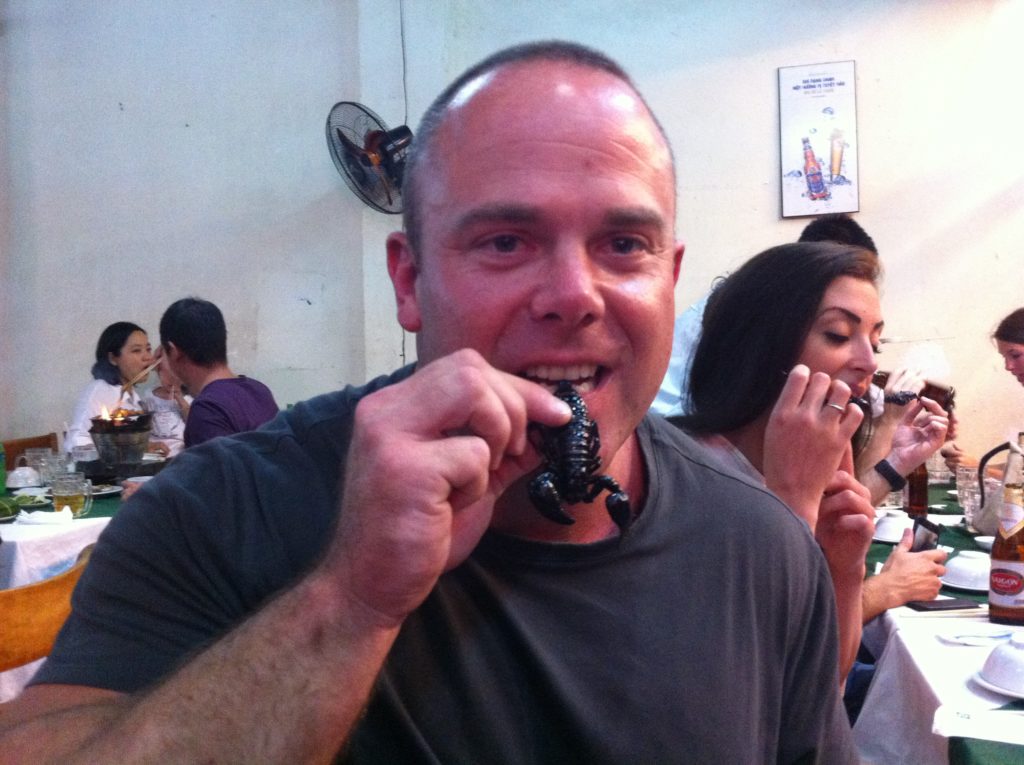 There is definite “tactical” knowledge to be obtained while traveling. Now I know how to cook and eat a scorpion! These were appetizers at a local restaurant where I ate. They weren’t too bad.