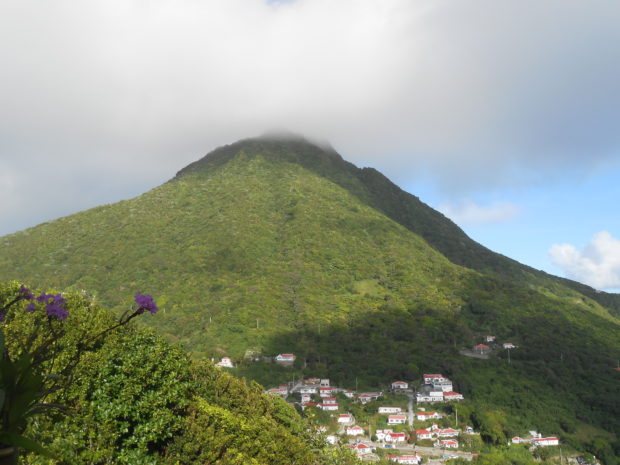 Mt. Scenery on the Island of Saba

If you all noticed some repeat articles in the last couple weeks, it’s because I’ve been traveling out of the country.  I spent the last week in the Caribbean, visiting French Sint Martin, Dutch St. Maarten, and the Island of Saba.  Saba was the place I was most excited about…primarily because most folks have never even heard of it.  It’s the smallest Caribbean island.  An extinct volcano sprouting from the sea, Saba is only about five square miles and has about 1500 residents.  It’s very quaint and known for its friendly population, mountainous hiking, and excellent diving.

There are no direct flights from the USA to Saba.  In fact, the only way to get there is by ferry or prop plane from St. Maarten.  Saba has the shortest commercial airstrip in the world and cannot accommodate jet planes. 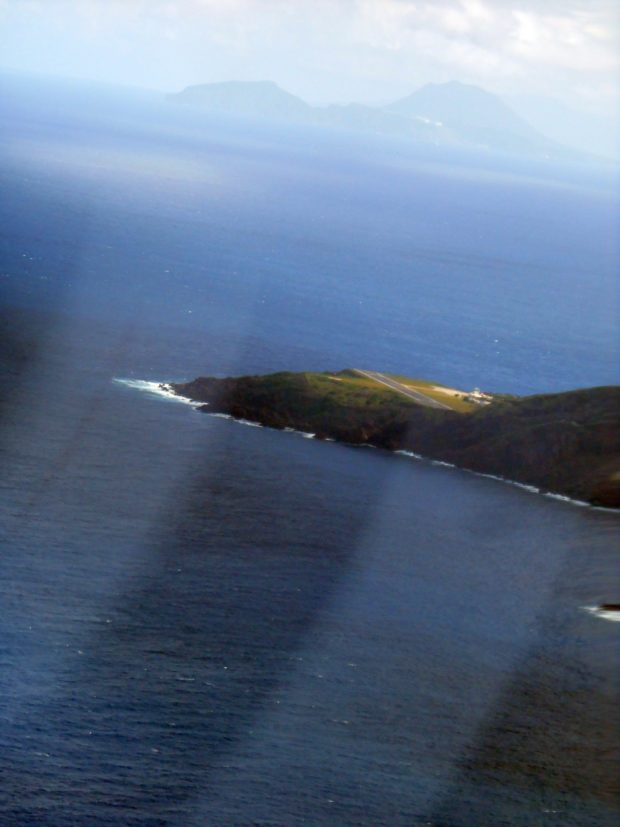 The Saba airstrip as viewed from the prop plane’s approach

We flew into St. Maarten, rented a car and spent a couple days enjoying the French side of the island.  The people were amazingly friendly and the food was some of the best I’ve ever eaten.  It’s hard to beat fresh seafood and gourmet French cooking.

The driving was quite challenging.  Typical of third world travel, things are bound to be screwed up.  This trip was no exception.  I don’t normally rent cars in my third world travels.  Driving is usually very expensive and dangerous.  But this was St. Maarten.  It couldn’t be that bad!  With car rental prices averaging about $100 for an entire week, I figured it would be cheaper to drive rather than use public transportation.  Since all the car rental agencies were approximately the same price.  I decided to patronize a local company “EZ Car Rental” rather than one of the big American companies like Hertz or Budget.  I generally think that using the services of local companies provides a more positive impact to the local economy and I try to do so as much as possible.  I booked and prepaid for the car rental through Orbitz.com.

Using the local company was an incredible mistake in this case.  When we arrived at the airport, we went to the booths of rental car agencies in the arrivals hall.  There was no “EZ Rental Car” booth.  Other agencies told us that the company goes by another name and directed us to the correct booth.  Unfortunately, it was the only booth that was unoccupied.  No one had seen any of the agency’s employees all day.

I had to pull up the rental contract and ask around until someone loaned me a telephone to call the company.  I finally spoke to the agent on the phone and she unapologetically said that she hadn’t planned on working that day, but that since I had a reservation, she would send someone in a shuttle to pick us up from the airport and take us to the rental lot.  The shuttle arrived after 30 minutes and it took us to the waterfront slum where the rental agency was located.  We got a beat up Hyundai hatchback with a broken tail light.  I guess we were lucky to get a car at all.

Lesson one learned.  Never prepay for car rental.  And never trust third world companies to offer the same level of service that we are accustomed to here in the States.

Driving was quite a challenge.  Knowing that I couldn’t use Google maps on my phone because of the outrageous foreign data package charges, I downloaded and printed directions to our hotel.  The directions were completely wrong.  We followed them diligently (despite a lack of street signs) and ended up on a dirt road with nothing but an abandoned field where our hotel should have been.  Lesson two learned.  Don’t rely on Google maps outside of the USA.  We finally found our hotel after asking for directions numerous times and then randomly driving through the neighborhood where it was located until we spotted it.  Not much fun.

The driving itself was quite different than driving in the USA.  Traffic laws are generally more like “suggestions” than hard and fast rules.  Cars drive excessively fast or extremely slow.  Random stops are commonplace.  Drivers will stop in the middle of a two lane highway just to talk to friends for awhile.  No one cares that they are holding up all the traffic behind them.  Right of way isn’t determined by any other factor besides vehicle size.  Large buses and trucks didn’t yield for anyone.  The bus drivers knew that other cars wouldn’t hit them so they just pulled out in front of us on a regular basis, forcing me to slam on the brakes so we didn’t die.  Driving there was like playing a real life game of “Frogger.”  We saw one pretty bad accident where a bus struck a motorcycle.  The motorcycle driver was thrown from his bike and landed head first on the pavement.  He wasn’t wearing a helmet and looked pretty messed up.

Other than the driving difficulties, we enjoyed our stay in St. Maarten.  The beach was beautiful, weather was nice, and food was amazing.  What more could a person want?

After a couple days of beach lounging we flew to Saba.  Saba was cool.  It was a very quaint and slow paced island.  We did some diving, snorkeling, and lots of walking up and down the mountain roads.  The underwater geography was first rate…a beautiful and healthy reef ecosystem that supported lots of cool marine life.  I saw several large sea turtles among the tropical fish.  Lauren spotted a couple sharks, a sting ray, a Moray eel, and a barracuda.

We spent three days in Saba and then flew back to St, Maarten where we spent two more days on the Dutch side of the island.  We had fun there too, but both of us liked the French side significantly more.

There isn’t much to report on the weapons/tactics/crime element to our trip.  We didn’t encounter any problems.  Saba has essentially zero violent crime.  They haven’t had a murder in 25 years.  Rapes and robberies are unheard of.  Residents all know each other and that fact completely deters all violent crime.  We weren’t even given a key to our guest house because no one locks their doors on the island.  The Saba residents I talked to said that guns were rare.  Residents could get permits for rifles and shotguns (after background check and shooting competency test) and there was some hunting on the island.

There are only nine cops assigned to the entire island.  They are brought in from the Netherlands or Bonaire for short rotations on Saba before going home.  The residents stated that the cops were extremely bored and spent most of the day napping.  We didn’t see a single officer during the three days we spent on the island.

In French Sint Martin, the cops were very well equipped.  The wore uniform BDUs in navy blue and had complete gunbelts containing a Sig Pro pistol in a Safariland SLS holster, extra magazines, flashlights, handcuffs, and Tasers.  It’s one of the few third world agencies I’ve seen that are equipped similarly to the cops here in the USA.

On the Dutch side the cops were a little more casual.  They only carried S&W M&P pistols in Safariland SLS holsters.  They didn’t carry any spare mags or less lethal weapons.  Their belts were bare except for gun and handcuffs.  Residents on both sides of the island said that the police were professional and wouldn’t take bribes.  That’s another third world rarity.

Overall, it was a very relaxing trip away from the cold Ohio weather.  Back to regular programming tomorrow!