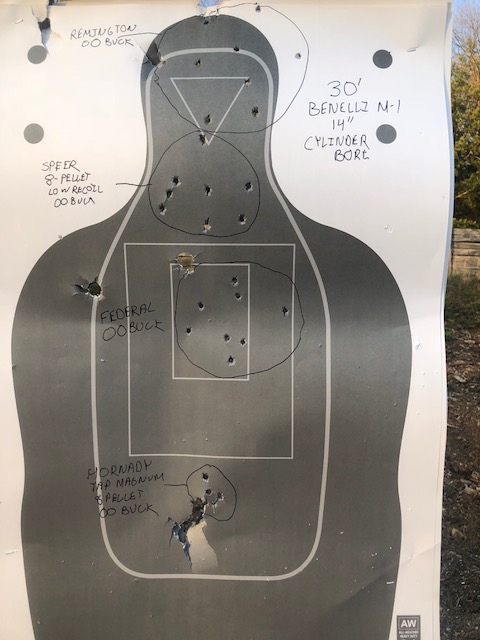 There are a lot of myths when it comes to using a shotgun for home defense.  Most of those myths center on the idea that the buckshot pattern is a function of barrel length and that buckshot patterns all expand at the same rate as they fly away from the weapon.

I recently got my Federal paperwork back from the creation of a short-barreled shotgun.  I have an old HK Benelli M-1 that I equipped with a 14″ barrel and SureFore forend.  I took it out to shoot it last weekend for the first time.

With such a really short barrel, you would expect a huge pattern, right?  Wrong.

Pattern is more a function of the type of choke the shotgun has than its barrel length.  In fact, using buckshot loads that are not buffered or encased in a shot cup, patterns will get LARGER as the barrel length increases.  The longer the barrel, the more likely that the pellets hit the inside of the barrel or each other while traveling down the barrel of the gun.  Those strikes deform the each of the pellets and cause them to fly erratically, leading to a larger overall spread.  Having a short barrel doesn’t mean the pattern will be huge.

Another factor of patterning size is the manufacturer of the ammunition.  Not all 00 buckshot is equal.  Rounds with a specialized shot cup (Federal Flight Control, Hornady TAP/Critical Defense) will shoot the tightest pattern.  “Buffered” buckshot will shoot larger patterns.  Unbuffered buckshot will create the largest pattern.  In general, the cheaper the round, the larger and more inconsistent the pattern.

For an idea about this variability, take a look at the target below.  I shot four different types of 00 Buck through the 14″ Benelli at a distance of 30 feet.  There was a tremendous variation.

The Remington 00 Buck shot a pattern about 10″ in diameter

The Hornady TAP Magnum 00 Buck shot a pattern less than 3″ in diameter. 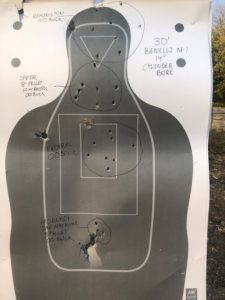 There is also a myth that 00 Buckshot spreads approximately one inch per yard of travel.  This may be close to true with very cheap buckshot fired out of a cylinder bore.  Shotguns that have a choke or rounds that use a specialty shot cup shoot groups much tighter than this standard formula suggests. 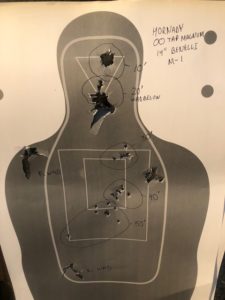 The patterns were a single hole out to 20 feet.  At 30′ it shot about a three inch group.  The 40′ group looked about the same.  At 50 feet the group expanded to about seven inches in diameter with eight of the nine pellets easily staying withing the size of an average person’s face.  If you followed the standard formula, you would expect a group more than twice that size.

Why is this relevant?

It’s relevant because if you use a shotgun for personal protection, you had better test your defensive load at the common ranges you plan to employ it.  If you haven’t done that, my guess is that you are in for a bit of a surprise.