I always tell people: “Guns are like cars.  You can buy the most expensive and most reliable car ever created, but given time it WILL break down.”

People don’t believe me.  The most common retort is “But my xxxxx has NEVER malfunctioned”.  I just nod and smile but inside I’m thinking:  “That’s because you don’t shoot or carry your gun the way I do.”  If you shoot 50 rounds a year, your gun likely will never break.  If you really run it hard, I promise you that it will.

I shoot a lot.  I’m not nearly at the level of some, but I’ve sent an average of 15,000 rounds a year downrange for each of the last 10 years.  In addition to that, my job as a full time police firearms trainer as well as an instructor at one of the largest shooting schools in the country ensures that I see several hundred thousand more rounds fired through my students’ guns each year.  That’s a lot of opportunity to see guns puke.

I’ve seen every type of gun break.  You name it, and I’ll tell you a story about how one broke.  In fact, I think I’ve broken every single carry gun I’ve ever put a significant quantity of rounds through.  If you work them hard, they’ll all die.

With that said, it’s no secret that I think that Glock and Smith & Wesson M&P pistols are generally the most reliable fighting handguns made.  Overall, I see far fewer issues with those guns than with any others.

But that doesn’t mean they are bulletproof.

Yesterday I was training our newest officer at the range.  I was shooting a demonstration of the drill that I wanted him to complete with my duty pistol, a  Generation 3 .45acp Glock 21.  I fired a couple of rounds in a five-shot string and then I heard the dreaded “click” when I pulled the trigger again.

“Damn, I hate having malfunctions in front of a student!  I should have lubed this gun today!” was what I was thinking as I immediately executed a Tap/Rack.  A live round flew out the ejector port and  I pulled the trigger again.  Another “click”.  Another Tap/Rack.  Another live round flying.  And then a third “click”.

Time out.  I stopped the drill and unloaded my gun.  Something was obviously wrong.  I looked at the three ejected live rounds and there wasn’t a single mark on any of the primers.

“OK”, I thought.  “I know what this is”.  The gun seems to be working, but the primers aren’t getting hit.  Having graduated Glock armorer’s school four times, I realize the most common causes of this type of malfunction are either a broken firing pin, a weak firing pin spring, or a clogged firing pin channel.  All are easy fixes.  I’ve seen them all before.

I took the gun apart and detail stripped the slide.  Everything seemed to be in perfect order.  Firing pin was intact.  Spring had good tension.  No gunk in the channel.  I cleaned everything anyway and put my gun back together.  When I tried to shoot again, I got the same result.  “Click.”  No primer strike.

I must have missed something.  I broke the gun down again and then a saw what I had missed.  It was something  I had never seen before.  The vertical extension of the trigger bar was completely sheared off! 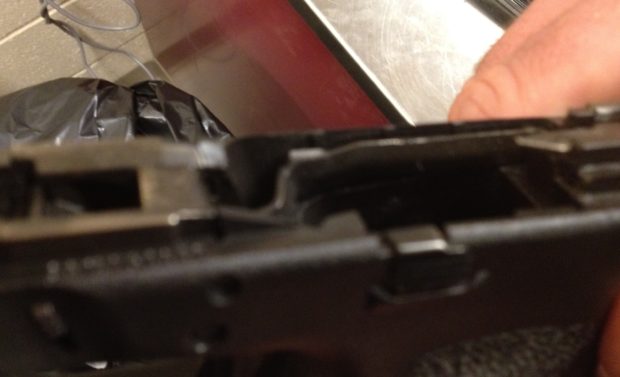 If you have no idea what I’m talking about, let me explain…

The Glock pistol has two internal safeties to prevent the gun from firing unless the trigger is moved to the rear.  One of those safeties is called the “firing pin safety”.  It’s a little button that has to be depressed before the firing pin can protrude through the breech face.  It gets depressed by the vertical extension of the trigger bar as the trigger moves rearward.  No vertical extension means that the button doesn’t get pushed and the firing pin can’t reach the primer. 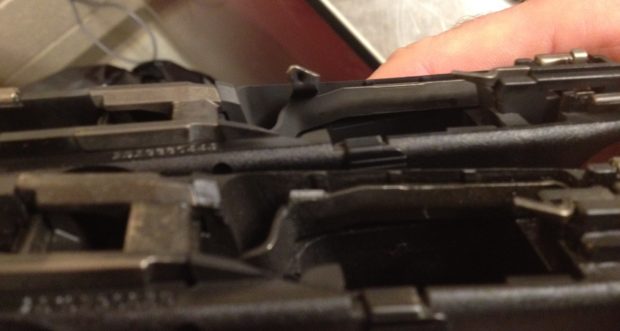 Two side-by-side Glock 21s. The closer one has no vertical extension. The farther one is what the gun is supposed to look like.

I’ve seen millions of rounds fired through Glock pistols and I have never seen this happen!  The part isn’t under any real stress and doesn’t usually snap off like that!

My gun hadn’t been too beat up compared to other pistols I’ve used.  This one was made in 2003.  I put 32,000 rounds through it before the first serious breakdown in 2010.  In that instance, I broke off one of the rear slide rails.  Glock replaced the frame (including the trigger that broke).  The new frame/trigger had about 9,000 rounds through it.

It was a fight stopping malfunction and it couldn’t have been prevented.  It’s an easy fix, but it requires a spare trigger bar, a punch, and about 10 minutes.  You can’t fix it in the middle of a gunfight!

I was thankful it happened on the range instead of the street.  I was even more thankful that I had a .38 revolver on my ankle that I could have transitioned to if I was in a gunfight.  Yes, I was carrying a second gun even though I was just teaching on the range.  I always carry one.  Why?  To prevail in this very same type of situation.

If you don’t carry a backup gun, you are foolish and misguided.  This type of malfunction happens randomly and cannot be immediately fixed.  If it happened in a gunfight and you didn’t have a second gun…well…I hope you paid your life insurance premium.  Your spouse is going to be rich.

Don’t trust your life to any mechanical device!  All mechanical devices can fail!  One = None.  Plan for breakdowns and embrace the concept of redundancy.  Your spouse might not get that life insurance windfall, but I bet that will be OK.

Now for the good news….

Since I didn’t have a spare trigger bar to replace my broken one, I had to pull a new gun out of the armory.  I chose to break in a brand new Generation 4 Glock 21.  The Gen 4 guns have a different frame texture, new recoil spring assembly, and adjustable backstraps to accommodate different hand sizes.

They also have a reputation for not being as reliable as the Gen 3 guns.  Early production Gen 4 guns had random feeding issues.  Glock even had a recall (even though they don’t call it that) on some recoil springs. 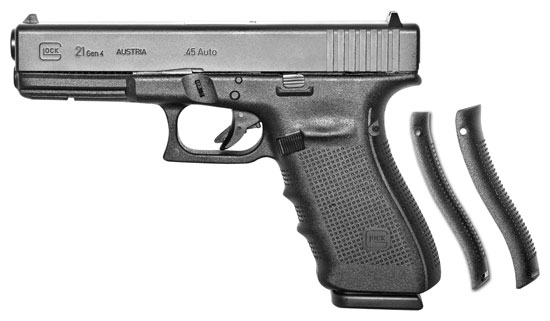 I’m happy to report that my new Gen 4 Glock 21 ran like a champ!  325 rounds in two days with no cleaning or lubrication.  I shot several types of ammo and even used my Surefire X-300 on it for several magazines.  Not a single hiccup.

I had issued my new officer a Gen 4 Glock 22 in .40 (his preference) the day before.  It performed equally well.  700 rounds over three days and no malfunctions.  Whatever problems Glock had with their Gen 4 guns don’t seem to be an issue with these two samples.

…But I’ll still carry my backup gun just in case.