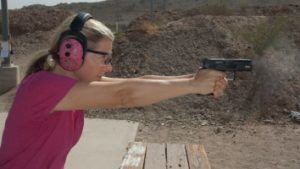 Reading the article The Right Gun for a Woman, According to Women  got me a little fired up.  Go check it out before you continue here.

Female Shooters On: Semi-Autos vs. Revolvers

As most of you know, I’m not a woman.  I don’t purport to know anything about what is “best” for women.  I do, however, know guns.  And I have had thousands of female students over the years in my firearms and self defense classes.  I’ve figured out pretty well what works for my students, both male or female.

Men often choose guns for the women in their lives because the particular woman doesn’t have any experience in the shooting field. This can certainly lead to some bad decisions. I don’t know how many times I’ve seen a guy at the gun store showing his wife a pretty Raven .25 with pink grips. Uneducated men seem to think that women need tiny little guns to fit their tiny little hands.  While a tiny gun is better than no gun at all, tiny guns are hard to shoot well.  They are often the worst guns for a new shooter to purchase.  A lot of men don’t get that and make bad decisions for their spouses and female family members.

So the article above suggests that the best way for a female shooter to pick a defensive gun is to allow her to shoot a variety of guns and choose for herself which gun she likes best. That’s a great idea. I’m completely in support of it.  But in this case it turned out horribly…reinforcing every stereotype that characterizes women as being clueless about guns.

The author took a group of five women to the range, let them shoot a variety of handguns and then asked them questions about which guns they liked best and which they would like to carry defensively.

Out of all the guns they shot, when asked which guns they would like to carry, one woman picked a 1911. Two others picked NAA mini revolvers, and two picked a KelTec .380.  What?  That can’t be right!

The 1911 will quickly get tossed aside as being too heavy and big by most people (men included). It won’t be carried concealed.   I doubt 1% of female pistol packers  choose a full size 1911 as a regular carry piece.

The NAA is a single action .22!  Seriously?  I couldn’t imagine a worse gun for self defense.   It’s definitely small enough to carry and can certainly be pressed into service in a pinch, but if I was going into a gunfight, the mini revolver would be the very last firearm I would choose if I had any other options.

The KelTec is a slightly better choice, but it’s still junk. More than half of the ones my officers have purchased have puked right out of the box, needing an immediate trip back to the factory for warranty repair.  Occasionally you will come a cross a reliable one, but they are somewhat difficult to fire and have horrible sights.

Out of all the guns that they shot (which included a S&W Shield and a Ruger SP101), the women picked the least reliable and hardest to shoot weapons on the list!

I’m all for personal choice, but do you really think your wife is better off with a mini revolver than she is with a quality snub .38 or a 9mm Shield?

Here are the problems….

1) If you provide crap guns as a sample, people will choose the crap guns.  I’m hoping that if guns like a Glock 19, Glock 26, or S&W M&P were added, the women would have chosen them.  I’ve found very few women who have not shot those weapons well.  The Shield is a good choice too.  I’m puzzled why more of the women didn’t choose it.

2) Admit your limitations.  The fact that you have hunted since you were 10 years old does not make you a gun expert.  Have enough sense to discard your ego and consult a real expert (not a gun store clerk) for advice if you want to find a quality gun for the woman in your life.

3) If you let your spouse choose by shooting a variety of guns, use a realistic performance standard.  This author let the women casually shoot “about a dozen” rounds out of each gun without requiring either a time or accuracy standard.  The mini revolver is a fun gun to shoot and if you let me casually plink with it for a few rounds I might think that I actually liked it.  If you made me draw from concealment and get a hit in the center mass of the target in under two seconds, I would probably quickly change my mind.

I’m certain that this article will produce a run on mini revolvers and KelTecs by a group of newly-enlightened concerned spouses.  I hope my readers are smart enough to avoid the stampede.