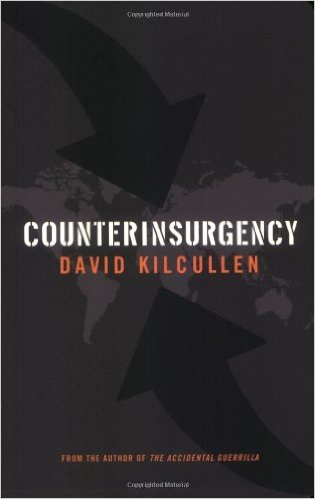 First off, let me wish all my American readers a happy Thanksgiving holiday.  I hope you are spending it eating good food and spending quality time with the folks you love.  I’ll be spending my holiday in a police cruiser.  I work all the holidays so that my coworkers with children can take the time off to be with family.  For all the cops and service members who are working today, please remain vigilant.  The world is getting crazier by the minute.

This week I have been re-reading Counterinsurgency, David Kilcullen’s excellent treatise on battling terrorist organizations on an unconventional battlefield.  In the book, he lists his 28 rules to ensure a successful counterinsurgency campaign.

It struck me that responding to events like the recent terrorist attacks in Paris and active killer attacks here at home is truly a counterinsurgency effort.  Because of Posse Comitatus laws in  the USA, this counterinsurgency effort will be fought primarily by police officers (with the assistance of armed citizens who choose to heroically intervene during an attack) rather than the military.  We are fighting the same battle that our military equivalents are fighting in Iraq, Afghanistan, and dozens of smaller fronts all over the world.

Can Kilcullen’s advice be useful to us?  I think so.  Unfortunately, we’re not doing a very good job following his 28 guidelines.  Here are a couple of his points where law enforcement in this country is failing on the counterinsurgency front:

“Travel light…You will be weighed down with body armor, rations, extra ammunition, communications gear, and a thousand other things. The enemy will carry a rifle or RPG, a shemagh, and a water bottle if he is lucky. Unless you ruthlessly lighten your load and enforce a culture of speed and mobility, the insurgents will consistently outrun and outmaneuver you. But in lightening your load, make sure you can always “reach back” to call for firepower or heavy support if needed.”

Soon after the Paris attacks, my Facebook news feed was deluged with comments about how folks were starting to feel the need to carry long guns, bigger pistols, and body armor whenever they went out in public.  While better armament undoubtedly will serve someone well in any battle, that isn’t what this war is all about.  It isn’t about who has the “best” equipment.  Clearly the Paris terrorists did just fine with a couple of AK-47s and a few homemade explosive devices.  They didn’t need $5k AR-15s, night vision, and rifle plates to cause massive carnage.

Our society wants to buy its way out of every problem.  We think there will be a “hardware” solution to every “software” problem.  Speed and mobility, not more or better weapons, is the solution on this battlefield.  Everyone straps on five spare mags and thinks they are ready for the fight, when truly, it is an issue of mindset, training, and tactics.  An old dude with a .38 snub could have stopped the Paris theater hostage siege if he was smart and planned his moves well.  More guns aren’t the answer.  better training and more adaptive thinking is.

“Train the squad leaders—then trust them. Counterinsurgency is a squad and platoon leader’s war, and often a private soldier’s war. Battles are won or lost in moments: whoever can bring combat power to bear in seconds, on a street corner, will win. The commander on the spot controls the fight. You must train the squad leaders to act intelligently and independently without orders. If your squad leaders are competent, you can get away with average company or platoon staffs. The reverse is not the case. Training should focus on basic skills: marksmanship, patrolling, security on the move and at the halt, basic drills. When in doubt, spend less time on company and platoon training and more time on squads and individuals. Ruthlessly replace leaders who do not make the grade. But once people are trained, and you have a shared operational “diagnosis,” you must trust them. We talk about this, but few company or platoon leaders really trust their people. In counterinsurgency, you have no choice.”

In the police world, street officers and first line supervisors aren’t given the training or authority to adequately respond to a terrorist attack similar to what happened in Paris.  Layers of bureaucracy and inept commanding officers conspire to impede officers and sergeants from immediately implementing solutions to solve a tactical problem on the street.  Cops and Sergeants are afraid to act because of fear of doing something “wrong”.  When that happens, they default to doing nothing until someone with “authority” responds to the scene.  Unfortunately, the people wearing brass on their collars know less about tactical operations than the street officers.  They inevitably screw things up and the terrorists achieve their goals…massive carnage and the profound loss of faith in the institutions that exist to protect American citizens.

Counterinsurgency operations require fast thinking and even faster acting.  That can’t happen if the street officers are awaiting orders from the command staff.  Individual officers and street supervisors need to be trained and empowered to act immediately in order to stop a crisis from worsening.  That rarely happens.  Unfortunately, such training costs money, and no one seems to have a surplus of that in these days of budget shortages.  So the officers suffer.  They don’t get trained to deal with terrorist hostage sieges.  Because of lack of training and lack of administrative support, they hesitate to act when a crisis is unfolding.  It’s always safer to let the bosses make the decisions.  Best wait until they arrive before acting.  Unfortunately, by then it’s too late.  When American police officers are forced to deal with violence on the scale of what happened recently in Paris or what happened in Mumbai in 2008, they will fail.  And that failure will rest solely in the hands of commanders who didn’t trust and train their street officers.

I hope this Thanksgiving is peaceful and free of violence.  Unfortunately, I don’t think that will happen.  We are ripe for a terrorist attack.  And when it happens, lives will be lost because cops won’t be adequately prepared to deal with it.  You are on your own.  Be smart.  Avoid obvious targets.  Be armed.  Be aware.  Commit to act with all the violence required to resolve the incident.  As my friend Dave Spaulding says “Be an active participant in your own rescue.”

I know this isn’t a light-hearted message on this day of thanks, but I’m hoping that my readers will take all the necessary precautions to protect themselves in this crazy world.  Happy Thanksgiving.  Stay dangerous.

If any of you are planning on doing any black Friday shopping on Amazon.com to avoid a potential terrorist attack, I would appreciate if you made your purchases by entering the site through my affiliate link.  If you do that, I get a small percentage of any money you spend.  It doesn’t cost you a dime.  Take some money out of amazon’s piggy bank and support the writing you find valuable.  Thank you and happy Thanksgiving.