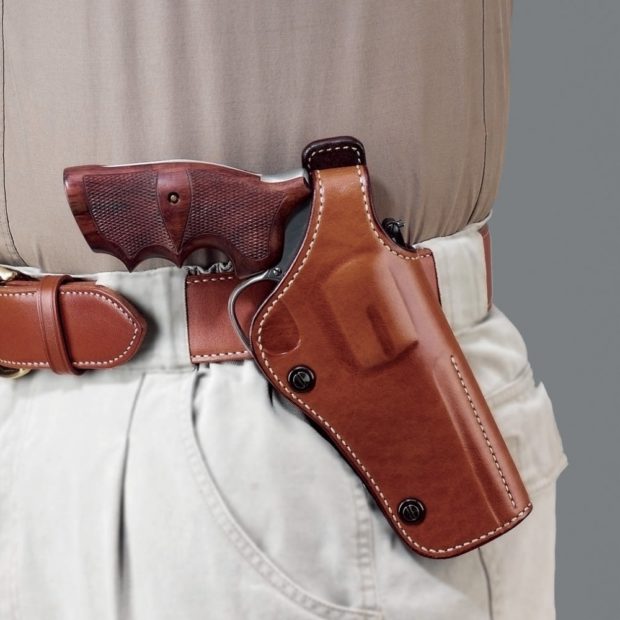 Recently, a couple of readers asked my opinion of cross draw holsters for carrying a small defensive revolver on the belt.  The readers noted that this style of carry is comfortable and very easy to access from a seated position in a vehicle.  Those are certainly worthy attributes of the cross draw position, but I still believe that most folks will be better served with a different style of holster.

Although I don’t see many cross draw rigs anymore, they used to be fairly popular.  When I got my first handgun in the early 1980’s, I often wore my holster cross draw when hiking or hunting out in the woods.  Later, as a cop, when my city was having a rash of bank robberies, I was assigned stakeout duty at a bank for several weeks.  I had to sit in an unmarked car and watch for robbers.  I wore a custom made cross draw holster for that detail because it was so easy to draw my gun from the driver’s seat of the car I was sitting in.

There are a few genuine advantages to cross draw carry:

-As mentioned before, comfort and easy access to the gun in a seated position.

– Depending on how close to the midline of the body the gun is worn, there may be less hand movement to get to your gun that if the weapon was carried behind the hip.  A surreptitious draw can be a useful asset at times.

-Less of a chance for a gun grab from behind.

– In a hand to hand struggle, if your opponent grabs you in such a manner that you cannot raise your elbows (think about a bear hug with your arms trapped against your sides), the cross draw can often be performed.  Moving the hand across the body to the gun doesn’t require the lifting of the elbow that is necessary to draw the gun behind the hip.

With all of those advantages noted, I still think there are better ways to carry the gun for most people.  Here are the downsides of carrying crossdraw:

-Poor weapon retention from the front.  Positioning the weapon’s grip in an ideal orientation for an attacker to grab it makes it an easy target for a gun grab.

It’s much harder to stop the draw of a weapon carried in the appendix position or behind the hip because more powerful muscle groups are utilized in those draw strokes.

-Missed first shots.  When drawing from the crossdraw position, the gun moves laterally across the body of the suspect.  Under stress, shooters often get on the trigger quickly and fire the weapon before the gun is properly aligned with the target.  On a vertical drawstroke (from appendix or behind the hip) that early shot goes into the ground in front of the suspect or hits the suspect in the lower body.  If a shot is fired early from crossdraw, it will be waist level and to the side of the suspect, potentially wounding innocent bystanders.

I also see people under stress “overshoot” their target when drawing from crossdraw.  They are moving the gun laterally as fast as possible and don’t “stop” quickly enough on the suspect’s torso.  The shot ends up going to the far right in a right handed shooter and misses the suspect.  These “overshoots” are very common when crossdraw shooters are pushing the speed of their first shot from the holster.

Although the crossdraw position has some merits, the potential downsides make me hesitant to recommend it.  Almost all the benefits from the crossdraw position can also be found in the appendix draw without having nearly the number of disadvantages.  I only recommend crossdraw to folks who have a shoulder injury that prohibits them from drawing from behind the hip or from the appendix position or for outdoors people who are carrying long barreled revolvers when hiking of hunting in the woods.