By now, most have you have likely seen the story out of London last week. Two Islamic terrorists attacked an off duty British soldier who was walking on a south London street.  They rammed him with their car and then jumped out and attacked him with large kitchen knives.  After killing the soldier, the men ordered bystanders to videotape their statements about how British citizens will never be safe as long as their military is fighting in the Middle East.  A link to the story is HERE.  The videotape of the incident is embedded below (caution for blood, gore, and strong language).

The killers continued to rant until the armed police arrived (about 20 minutes later).  As soon as the cops rolled up, the killers attacked them as well.  The cops shot both of them.  Below is video of the shooting:

Have you thought about what you would do in the event you witnessed or had to respond to such an event?  It’s a tough call with no easy answers.  Since it occurred in England, you wouldn’t have the option of defending yourself (or the victim) with either a firearm or knife.

Your tactical homework for this week is to answer the following questions.  Since I have readers who are both armed citizens looking for self defense advice and police officers, I’ll break the questions down into separate categories.  Choose from the list of questions that best suits your individual situation.

From the perspective of a witness/victim:

– Do you take any precautions to ensure that a vehicle won’t be used as a weapon against you when you walk down the street?  Do you walk towards oncoming traffic or away from it?  If you are walking with family members, who is closest to the street?  If this happened in the USA and you were armed, would you attempt to shoot at the driver of the car that was trying to run you over?  Is there anything else that would work better than shooting?

– Do you practice starting from a position of disadvantage?  This soldier’s first indication that he was being attacked was when he was struck by a speeding car.  Have you practiced fighting/shooting while tired or injured?

– How are your edged weapons defense skills?  Do you have a plan to deal with multiple attackers armed with knives other than “I’d just shoot them”?  More than likely, even if armed you will need some physical skills to bridge the gap in order to allow you to draw your weapon.

– If you were a witness, would you intervene?  What if you were unarmed like these witnesses were?  Would you intervene then?  What is the best strategy for an unarmed witness who chooses to intervene in this scenario?  Have you thought about using your car as a weapon in a scenario such as this?

– You see the two attackers with blades.  They also had pistols that they kept hidden until police arrived.  Dis you think about the possibility that the attackers had additional weapons before you intervened?  Would there be any difference in your response if you knew the attackers had guns as well?

– Did you consider the fact that there may have been additional attackers in the crowd waiting to stop any “hero” citizens?  How would you deal with that possibility?

– If you didn’t choose to intervene would you comply with the attackers’ demands to record their statement?  Why or why not?  What would you do if you chose to refuse the demands?  Would you stay around and watch or would you try to escape?

– If you witness am event like this, you must realize that eventually the police will arrive.  When they do, there is very likely to be shooting.  What would you do to ensure you weren’t caught in a crossfire or hit by a missed or ricocheting bullet fired by either the police or the terrorists?  Should you really be hanging around there when the cops arrive?

– Could you treat massive bleeding from a knife attack?  Do you carry a tourniquet or pressure bandage?  How would you improvise one if necessary?  See my article on battlefield first aid if you have any questions.

From the perspective of the responding police officers:

– How would you approach a scene like this?  Would you drive right up or would you park a distance from the scene and approach on foot?  What long guns do you carry and would you deploy one given the fact that you think you have two attackers armed with knives?

– According to the article:

“The driver, unable to draw her firearm, is saved by a male colleague in the back who fires his machine-gun through his window at a suspect who is charging at her.”

Can you draw your weapon while seated in your cruiser?  Have you tried?  What about if you are seated on the passenger side (the equivalent of the driver’s seat here)?  If you are right handed, it’s harder to draw when seated on the right side of the car.  Have you ever thought about shooting through your car window?  What precautions would you take to ensure that you weren’t hurt by the broken glass?  Do you wear eye protection on duty?  Do you know how window glass affects your bullet?  Should you aim higher or lower when shooting through a windshield?

– Have you ever thought about using your vehicle as a weapon?  Does your policy manual allow you to do so?

– Watch the video of how the attackers charged.  Are you prepared to deal with an aggressive charging attack like that?  How would you move?  Could you deploy your weapon while making those moves?

– The killers drug the body out into the middle of the road to lure the cops to come in closer.  When the cops drove up to the body, the killers attacked.  Did you consider that you might be driving into an ambush?  How would you prevent being sucked into an ambush scenario like this while on duty?

– If you are working with a partner, do you each have clearly identified fields of fire or zones of coverage when approaching the scene?

– How do you ensure that you aren’t attacked by the killers’ potential accomplices who may be hidden in the crowd?  Would you assign one of the responding officers to cover your backs as you dealt with the primary threat? 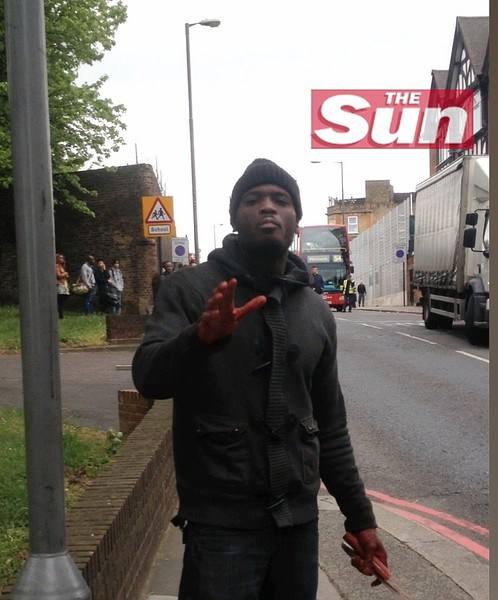