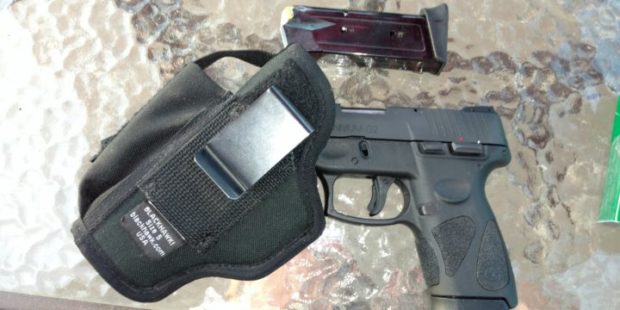 While most of the gun/holster combinations featured are completely adequate, some are less than ideal.  When I see some of these sub-optimal choices, I will highlight them here, telling my readers why I think that they should be making better choices.  I’m going to call my series #DON’TDIGTHERIG

This installment takes a look at Michael’s selection of a Taurus PT111 and a generic nylon clip-on IWB holster with attached mag pouch.  You can check out his submission HERE or look at the photo above.

Let’s start with the pistol.  Taurus pistols are just not as reliable as a comparable sized Glock, Sig, S&W, or Walther.  I rarely have a Taurus pistol of any model make it through any of my classes.  Last month I had a person shooting this exact pistol in my close quarters pistol class.  It did horribly, displaying constant feeding problems.

A couple other anecdotes if you aren’t convinced…

At TDI we train a military shooting team every year.  A few years back, Taurus donated some brand new 1911s to the team.  They showed up to the school with something like 20 brand new Taurus pistols.  Over half of the guns broke during the three-day class.

If you need even more proof, I once filmed a television show that was sponsored by Taurus.  We were supposed to use the Taurus pistols provided during the filming.  We tried, but we couldn’t get a single take where the Taurus guns would operate without a jam.  Fortunately S&W was also a show sponsor.  We filmed in one take when we transitioned to M&Ps.

Taurus has a great lifetime warranty.  Unfortunately, you will constantly be using it when your gun breaks.  Don’t trust your life to a Taurus.

Now let’s look at the holster.  Quite honestly, this kind of holster is an absolute abortion.  Don’t buy it.  Lots of people buy holsters based on brand loyalty.  Blackhawk generally makes good gear, but all holster makers have a bottom-of-the-barrel design for shooters who don’t want to spend money.  This is Blackhawk’s entry in the field.  It’s junk.

The holster is designed to be used both IWB and outside the waistband.  It fails at both.  As an IWB holster, the mouth collapses when you draw, making reholstering both difficult and dangerous.  The cheap clip will not maintain a good hold on the belt.  Half of the time when you draw the gun, the holster will come out of the pants with it.  Not good.

When carried outside the waistband, there is inadequate retention and the same issue with the clip.  The magazine pouch isn’t designed to fit any one particular magazine.  Like the holster it’s “one size fits many guns.”  That means it will usually be sized overly large.  The spare magazine will drop to the bottom of the pouch and be essentially  unusable because it can’t be accessed quickly.

The holster is a fail on all accounts.  Don’t buy something that looks anything like this.  Good general advice is to never use a holster that fits more than one firearm model.  It won’t fit any gun well.