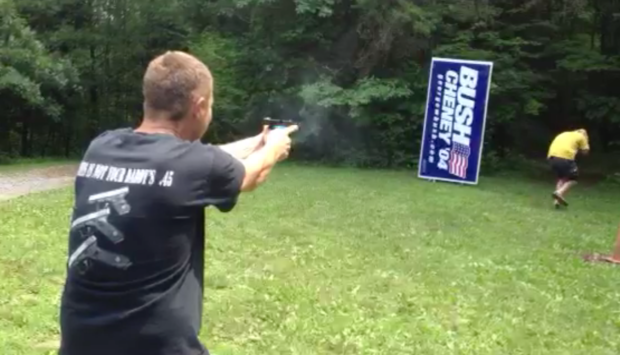 When listening to experts describe how to flee from an attacker who is shooting, the most common statement heard is “Don’t run in a straight line.”  Many people advocate running in a zig-zag pattern or running in a crouched position instead.  A target that is small or that moves randomly will theoretically be more difficult to hit.

A simple internet search find that zig-zag running is recommended by Wiki-sites, Tactical “experts”, martial artists, University Police Departments, and military instructors.  Running in a crouched position is advocated by Universities, self defense instructors, and survival experts.  It is rare that you will find anyone who recommends running in a straight line away from the shooter.

Despite all these recommendations, the idea that running in a zig-zag or crouch is better than running in a straight line is pure conjecture!  There really isn’t any documented evidence to suggest that any one technique is better than any other.  The “experts” are just guessing.

In an Active Shooter Response class I was teaching at the Tactical Defense Institute, I decided to conduct a test to see if there was any real difference between running in a straight line, running in a zig-zag pattern, and running in a crouched position.  Using some Simunitions weapons (Glock 17 pistols that fire a type of paintball) and the students as test subjects, I attempted to simulate an active shooter event.

I wanted the designated “shooter” to find his target and attempt to shoot it.  The target (or “runner”) was randomly selected to either run in a straight line, run a zig-zag pattern, or run in a crouch in order to get to cover.  The runner had to traverse a distance of 30 feet and get behind cover before he was “safe.”

In a real active shooter event, the shooter won’t know exactly where his victims will be.  Nor will he know the direction they will be fleeing.  To simulate this reality, I started the shooter with his back to the runner with 20 feet separating the two.  The runner could position himself anywhere along a designated line (20 feet away from the shooter) and run to either of the two pieces of cover I had set up.  That way, when the shooter turned around to fire, he wouldn’t automatically know where the runner was located.

For the sake of consistency across all of the experiments, I limited the shooter to only firing two rounds.  That proved adequate for the exercise.  In most runs, the shooter was firing the second shot just as the runner reached cover.  Most shooters would have been unable to fire any more shots.

For an example of what one of the test runs looked like, check out the video below:

I ran 34 separate tests, evenly split between each of the running options (straight line, crouch, zig-zag).  The “crouch” option had two fewer test runs than the other options because students had back injuries and could not attain a crouched position.  Participants were mostly male and ranged in age between early 20’s and early 70’s.  The “average” participant was a male in his 40s.  Here’s what I saw: 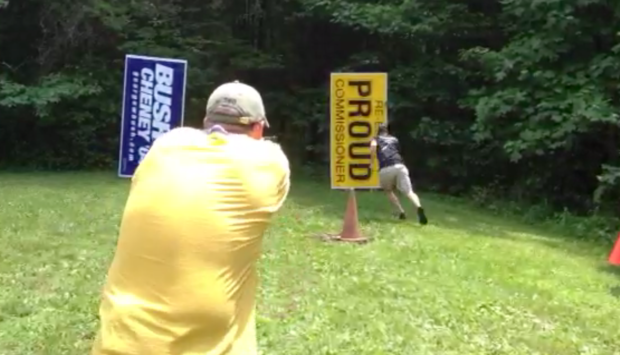 Surprisingly for me, there wasn’t much difference in hit rates between any of the running methods.  No matter which method the runner employed, he or she got shot 52%-55% of the time.  Despite the “experts'” recommendations against it, the straight line run resulted in the smallest percentage of hits.  But even more importantly, it also resulted in the fewest number of SHOTS FIRED.  The runners were moving so fast that in three of the test runs (25%), the shooters were unable to fire a second round.  Even if hit percentages are similar between the three methods, anything we can do to reduce the total number of rounds a shooter will fire is likely to improve our chances of a safe escape.

In both the crouch and zig-zag tests, the runner moved at a slower pace, thereby allowing the shooter to fire all of his allotted rounds.  The “smaller target” created by the crouched position didn’t seem to influence the shooters’ abilities to hit.  In fact, the crouch position resulted in both the highest percentage of total hits as well as the highest percentage of center mass/head hits.  I don’t see any benefit to running in a crouched position to escape a shooter.

Running in a zig-zag pattern did NOT reduce the percentage of hits.  It did however, reduce the chance that the runner will get hit in the torso or head.  Even though hit rates were similar to the other two methods, there were far more extremity hits in the zig-zag groups.  That may be a benefit or it could be a detriment, depending on the population involved.  If I was unarmed and not wearing body armor, I would prefer an extremity hit to one in the torso.  If I was armed and needed that extremity to shoot back, or if I was wearing body armor, I would prefer the torso shot.  We need to provide different recommendations for different populations.

This was a small study with some very specific parameters.  I will provide my advice based on what I saw, but please realize that my observations may not be applicable in a different context.  All of the shooters in this study were highly skilled, the ranges were short, and the rounds were limited.  Everyone was running on grass.  The results may not be the same if any of those variables change.

1) I don’t think there is enough evidence in the superiority of running in a zig-zag for wholesale recommendation.  It does not reduce total numbers of hits, but may be enough to turn what would be a fatal wound into a less serious extremity hit in some instances.

2) Zig-zag running should not be recommended for people who have knee problems or who are wearing body armor.  I saw several people with knee issues fall down on their zig-zag runs.  Falling down would likely lead to the worst possible outcome and should be avoided at all costs.  People who have knee trouble or who are wearing body armor should use straight line running.

3) The crouched running position should not be used while running in the open.  It may be useful to crouch if that crouch keeps you behind cover.  Otherwise, the crouch has no utility in this situation.  One other note with regard to the crouched position…several of the hits were to the low back.  They were angled in such a manner that they would have likely slid underneath any body armor the runner was wearing.  Be cautious about bending over and exposing gaps in your ballistic coverage!

4) Speed is important.  The faster that the victim can get to cover or out of the shooter’s range, the safer he is likely to be.  Anything that slows the shooter down (zig zagging, crouching) will likely increase the chances of getting hit.  In my observations, I noticed that the fastest runners got hit the fewest times.  If you have sprinting ability or speed, it is likely best for you to run in a straight line towards cover.

5) For those people who can’t run fast, zig-zagging may be a better option.  They are still likely to be hit, but those hits tended to be less damaging.

Given the results of this study, I don’t believe that we as trainers should be providing advice that any one escape strategy is clearly superior to any other.  There really isn’t all that much difference on the grand scale.  But, as in everything we do, there might be a significant difference at the individual level.

Don’t blindly parrot the “run in a zig-zag pattern” advice.  Take the time to assess your students’ needs and abilities and come up with a strategy that will work best for that person.

Special thanks go out to John Benner of TDI for allowing me to run the study and to Jonathan Willis for providing the video!