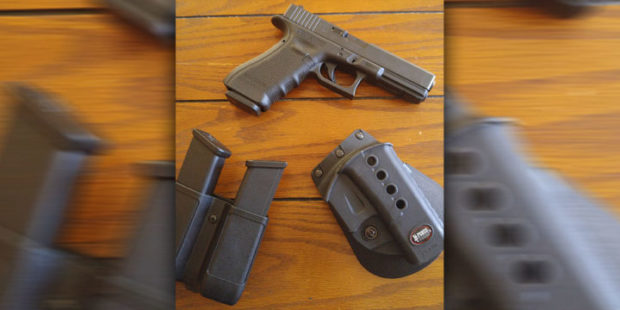 This edition covers  Chris’ carry selection, a Glock 17 in a Fobus paddle holster.  I’ve written a lot about Fobus holsters before.  They are crap.  Don’t carry them.  If you don’t trust me, watch this short video.  I’ve done the same thing to countless of my students wearing Fobus holsters in training scenarios over the years.

I’ve beaten a dead horse for long enough.  No more words about carrying in a Fobus holster.  What I really want to talk about in this edition is how Chris is carrying his magazines.  Do you see anything wrong?

Chris is committing an error I see fairly regularly among new shooters.  He is using a double magazine pouch and has the two magazines both facing different directions.  That adds unnecessary complexity to his reload.  As he draws the mag, he is going to have to assess the direction it is facing in order to properly insert it into the magazine well.  That takes time…time we don’t have in a gunfight.

Both magazines should be facing the same direction.  Most knowledgeable instructors advocate carrying HANDGUN magazines so that bullets point forward (or toward the belt buckle).  That orientation requires the least amount of movement to get the magazine into the gun.  Often rifle magazines are oriented differently, because they are larger and can be grabbed differently from the belt carrier.

Some instructors advocate bullets facing the rear for their pistol reloads  I think that takes more work, but as long as the reload is practiced, it can be successful.

No one advocates that magazines be carried facing different directions.  It’s the universal mark of an amateur.  We want to build consistency into everything we do with a handgun.  Having different drawstrokes for different magazines requires you to practice two different types of reload.  It’s not efficient.

Bottom line for concealed carry:  Avoid Fobus holsters and carry all your spare magazines facing the same direction for a consistent reload.