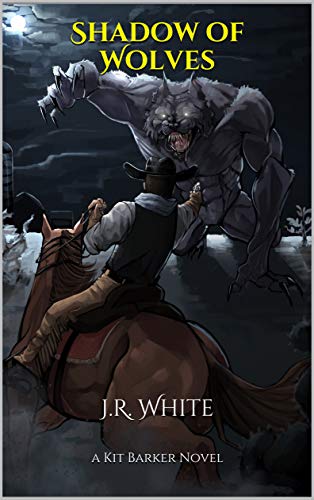 A fallacy is a mistaken belief, especially one based on unsound arguments, and no endeavor of man escapes without a few. Combatives and hand-to-hand fighting are no different. Sometimes fallacies arise because they make sense within our perceptions and expectations, or because they are comforting. Sometimes they exist as little more than excuses for not pursuing a certain skill.

Below are five of the most common fallacies I’ve encountered in hand-to-hand training. I’ll admit there was a time I even believed a couple of these and learning what I was wrong about was no pleasant experience, but it was ultimately an invaluable one.

This is easily the excuse most offered when I ask a newly minted CCW holder why they haven’t looked into combatives training. There are two responses to this common myth. The first option is “no, dude, no, you won’t” and the other, possibly worse, is “yeah, you probably will”. Neither of these options is appealing.

Hand-to-hand skills are an important part of protecting your weapon and making sure it stays in your control. Combatives skill in countering striking, clinching and other attacks is also vital to in-fight weapons access. In an extreme close quarters fight, the guy with greater skill is the guy most likely to prevail, and if you’ve never trained in that scenario the odds that you’ll just pull out that handgun and shoot your attacker are greatly reduced. The truth is you’re very likely to fumble your weapons access (because you’ve never practiced it in this context) and potentially lose control of your weapon. That never ends well.

Now for the flip side of this myth: “yeah, you probably will just shoot him”. 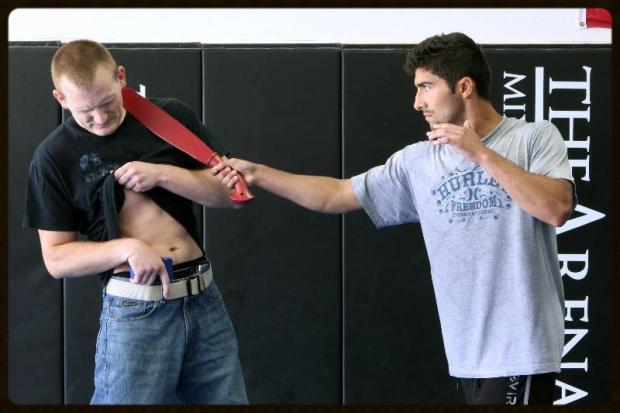 “At extremely close range, you often don’t have the time, space or control to safely access your defensive weapons, and may even make things worse by trying. In situations like this, combatives skills are needed to bridge the gap between the attack and your armed response.

Did you really need to, though? Someone trained in hand-to-hand fighting has a much wider array of options than someone who isn’t, and options get you out of trouble.

Most physical confrontations need not become lethal force scenarios if you have a basic combatives skillset. Just consider which statement you’d rather have to make: “He attacked, I clinched and threw elbows until he disengaged” or “He threw a punch, I got struck, I didn’t know what to do, the next thing I knew I had shot him”.

Fallacy 2: “Don’t go to the ground” and/or “That rolling around stuff is pointless.”

I sincerely wish the world was so simple that we could just choose to not end up on the ground. I don’t even mean just in fighting. I used to walk the icy sidewalks of a Minnesota winter; I could have used some of this magic ‘don’t go to the ground’ powder to sprinkle on myself each morning. However, observation of fights in both the real world and the combat sports shows consistently that a high percentage of fights end up on the ground. The truth is sometimes we end up in the dirt.

If we end up on the ground because somebody put us there, then we need to know what to do when it happens. Adding ground-fighting skills, such as those offered by Brazilian Jiu-jitsu or Catch Wrestling, will provide you with an auxiliary skill set that could be the deciding factor in a close-quarters attack. 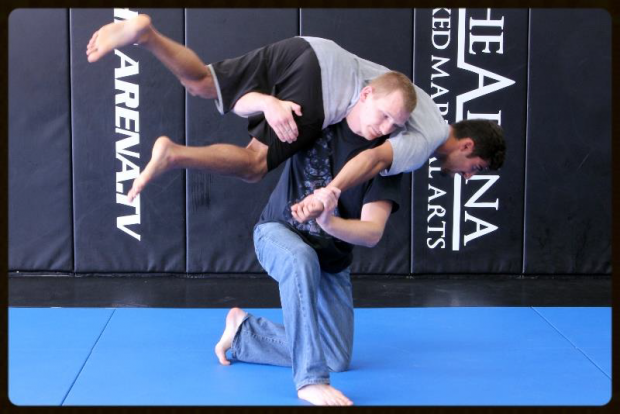 “Going to the ground or not isn’t always your choice to make, especially if your attacker can put you there.”

Many ‘foul’ techniques are ineffective, causing little more than mild pain and annoyance. Don’t expect to just poke that guy straddling your chest in the eye and he’ll jump right off you and vanish into a cloud of smoke. Taking the time to develop the skill to effectively escape that position is a much better plan.

As for those ‘foul’ and ripping type attacks that are effective, they must either provide a significant mechanical advantage (such as fish-hooking the corner of the mouth or eye-socket for leverage) or cause significant damage (such as rupturing the eardrum, or eye, or breaking the ankle). These must be applied from a baseline of skill. Believe it or not, there is a right and wrong way to pull hair, gouge eyes or smash groins. At the very least, you need enough combatives skill to recognize when an opportunity for ripping occurs, and it’s even better to have the skill to make the opportunity. 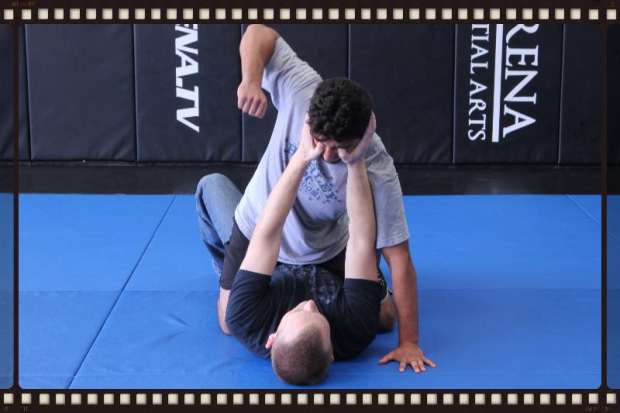 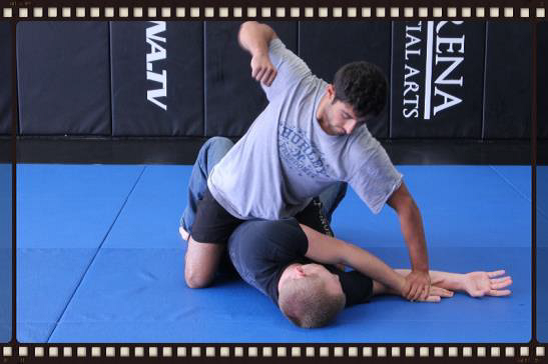 “Skill will almost always trump ‘foul’ strikes, and attempting them without a baseline of practical skill can often make your situation worse. In this example, attempting to gouge the eyes actually puts my arms in a great position… for the attacker.”

This one has many forms. Sometimes it’s mythical Dim Mak death-touch nonsense in which hitting someone ‘just so’ instantly puts them down. Sometimes it’s the claim that if a certain artery is cut the bad guy will bleed out in 7.362 seconds. (The amount of damage he can inflict in that time is rarely addressed. Perhaps he just sits quietly while ignoring the guy he was trying to kill a moment ago.) Other times it’s just the assumption that a certain technique will always be effective against everyone.

However, we know from the past that there is no magic method that stops a determined opponent 100% of the time. There are men and women walking around today who continued to fight after being shot through the heart and records of fighters ignoring broken bones and torn joints in the ring are legion.

Something needs to be understood about fighting in the context of personal defense: the fight is over when the attacker says it’s over; it’s just our job to lead him to that conclusion as quickly as we can. Sometimes that means running further than he’s willing to chase us, other times it means damaging him until he can’t. Your combatives training must include the mindset that you will fight until the fight ends or can be escaped, even if the Sunday punch doesn’t work out. 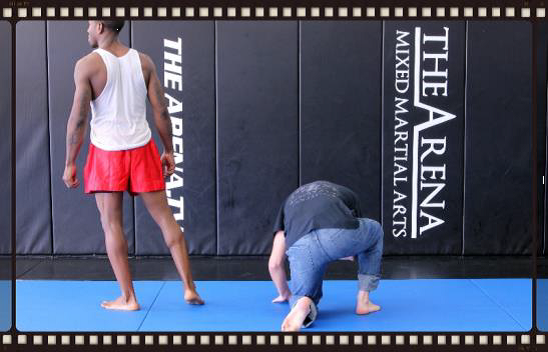 “You should never place ultimate faith in a particular technique (whether armed or unarmed) to always get the job done. Remember that the fight is over when the attacker is no longer a threat, regardless of whether or not your favorite move
works.”

Fallacy 5: “My X-colored belt in Traditional Martial Art Y means I know how to fight.”

Getting a belt rank in a traditional martial art takes time, attention to detail, discipline and perseverance. People who have earned black belts are understandably proud of them. Unfortunately, many traditional martial arts are either very far divorced from their fighting roots or teach a fighting style that is only effective in a narrowly defined scenario. If you think your belt in traditional martial art X is going to make you fight like the guys in the movies, you’re in for a very rude awakening, and I say that as someone who has been through it.

I had done traditional martial arts for nearly ten years when I had the chance to spar against a well-rounded MMA fighter. I was sure I knew how to fight, and I was sure about how he would attack, react or move; I was sure about a lot of things. My opponent, however, was unencumbered by such certainties. He was concerned only with winning, and he did so handily (and violently) with tools he knew would work, even if they didn’t look pretty or feature prominently in the latest Jason Statham vehicle.

This is not to say that all ‘traditional’ martial arts are useless. Many feature effective techniques and all build character and self-discipline. However, to apply those techniques to our overall personal defense skill set, they must be pulled from their rigid traditions and pressure tested in an accurate context. It doesn’t matter how well a technique works in the parameters we set if we can’t make it work in those set by our attacker.

Hand-to-hand combatives have been studied for as long as humans have had hands, and there have been myths and misperceptions all along the way. But don’t let these fallacies stand in the way of getting the training you need. Being aware of them is the first step to putting them to rest and getting on with the task at hand: building the best skill set for the defense of ourselves and our families.