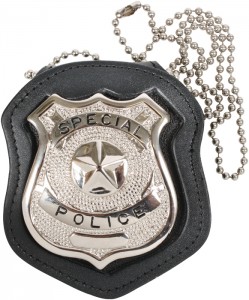 With the huge increase in active killer and terrorist events of late, I’m re-posting this article for my cop friends.  If you plan on taking any action off duty against one of these killers, this info may prevent you from getting shot by a fellow cop or CCW carrier.

I recently became aware of an unpublished study by a large municipal police agency.  The study provides some quality research showing that off duty or plainclothes officers may be subjecting themselves to serious dangers by wearing their badges on their belts.

I took interest in the study because when I am out of uniform, my badge is generally clipped to my belt near my gun.  I developed that habit back in the days before concealed carry was legal in my home state.  No one except a police officer was supposed to be carrying a gun.  I clipped my badge next to my gun in the hopes that if my concealment garment failed to hide my gun in public, people wouldn’t panic and call the police.  If they were able to see my gun, they were able to see my badge as well.  I may have to rethink my actions.

A large (name withheld) police department recently reported the results of a study their range staff completed using 920 officers as test subjects.  The officers were asked to make judgment calls in training using shoot/don’t shoot targets.  The “don’t shoot” silhouette targets were affixed with a life sized badge to designate the fact that they were not to be shot.  Half of the badges were placed on the targets’ chest area hung from a neck chain.  The other half had badges clipped along the targets’ belt lines.

Each of the 920 officers fired approximately 125 rounds during the training session.  The results as reported by the rangemaster were as follows:

The Belt Badge Targets under full lighting conditions were hit a total of 1,272 times for an average of 31.8 hits per In-service session.

The Neck Badge Targets under full lighting conditions were hit a total of 196 times for an average of 4.9 hits per In-service session.

The Belt Badge Targets under low lighting conditions were hit a total of 5,288 times for an average of 132.2 hits per In-service session.

The Neck Badge Targets under low lighting conditions were hit a total of 843 times for an average of 21.07 hits per In-service session.

The author of the study went on to make the following observations:

“When we compared targets in Low Light conditions to targets in Full Lighting, Fully lighted targets were hit 1,468 times versus 6,131 times for targets under low light, making it 4 times more likely a “No-Shoot” target will be shot in Low Light versus a Fully Lit target during these exercises…

As the data indicates, lighting conditions were a big factor in how our personnel performed, but the actual location of the placement of our badge on the target proved to be an even bigger determining factor as to whether a target was engaged or not by our officers.”

The report then went on to advise all officers to strongly consider avoiding carrying badges at the belt line when in a plain clothes capacity.  Given the evidence, I’d have to agree with their recommendations. 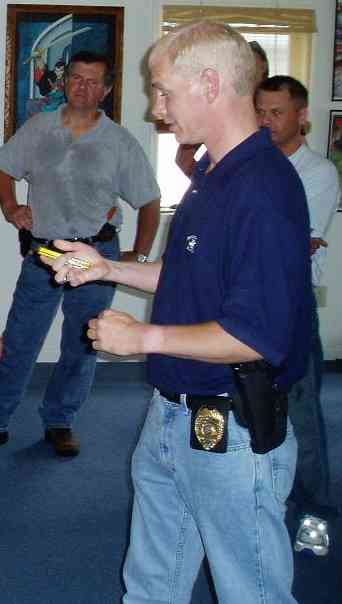 This off duty officer (taking my defensive knife course) has his badge on his belt. The study shows that he may be more likely to be accidentally shot by a fellow officer when his badge is here.

I still carry my badge on my belt.  I just can’t stand wearing anything around my neck.  If I am in plainclothes and have to take police action, I generally remove it from my belt and clip it onto the front of my shirt or hold it in my hand high above my head so everyone can see.  That may be an alternate option if you don’t like the neck style badges.

Ultimately, you’ll have to decide for yourself how to carry the badge.  Just recognize that your decision could have life or death consequences if you respond to a crime while off duty or in plain clothes.