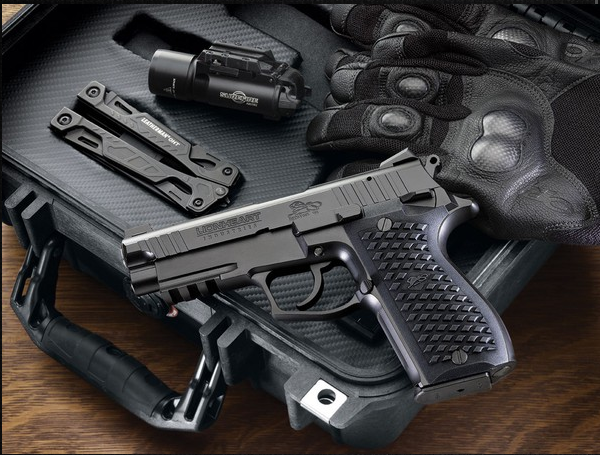 I require the completion of at least one day of advanced firearms training (over and above a CCW class) from a known shooting school or traveling instructor as a prerequisite to take my close range handgun class. I find that after completing some advanced training, students generally have a basic idea of how well their gear works. Bugs with guns, holsters, and gear usually don’t happen too often in my classes because most students have already done some training with their chosen carry set up and jettisoned what doesn’t work.

Because of this, most of the students in my classes tend to run Glocks or M&Ps. I occasionally see a 1911 or a Sig, but I don’t see that many unique guns.  Last weekend’s Extreme Close Quarters Gunfighting class was a bit different. In addition to the regular Glocks and Smiths, a few of my students brought some unusual carry hardware.

On the line I had a Lionheart pistol (the first one I’ve ever seen), a CZ P07, and a double stack compact 9mm from Bersa. What are your guesses about the relative reliability each of those pistols?

The Lionheart operates with a really funky “double action plus” system.   It can be carried cocked and locked like a 1911 or it can be decocked and carried like a traditional double action auto pistol.  The decocking however, isn’t accomplished with a lever.  To decock, you must manually push the hammer forward with your thumb. This is an awkward action.  No matter which hand you use to decock the pistol, you always have to break the firing grip. The gun I saw wasn’t very reliable either, having lots of malfunctions. It costs $750 and the one in my class didn’t run well at all. Not recommended. 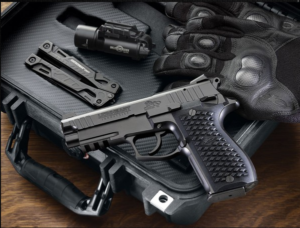 I expected that the CZ P07 would do fine.  I don’t often see CZ pistols in my classes, but those I have seen seem to be fairly reliable.  Not the case for the one I saw on Sunday. The gun started out working fine, but later in the day began to seriously choke.  The student would pull the trigger and the gun would fire.  The slide would move back enough to reset the trigger, but not enough to eject the empty case. The slide would then go forward, rechambering the empty case and automatically decocking. The hammer followed the slide forward rather than remaining in the cocked position.

This happened during about 75% of the student’s shots. Gun would go bang, automatically switch to double action, and rechamber the empty case. It made for a frustrating day for the student but she chose to keep working with the broken pistol because that’s the gun she says she shoots best.  After talking to some friends, I believe it is possible that the gun had been hacked on by a home gunsmith.  The weapon was purchased used and no firing history was available.  The CZ brand of pistols is very commonly used by shooters involved in 3-gun, IPSC, or USPSA shooting competions.  Many of these guns have been “worked on” to make the trigger lighter.  That may be what happened here.  Who knows.  In any event, the malfunctioning gun was no bueno. 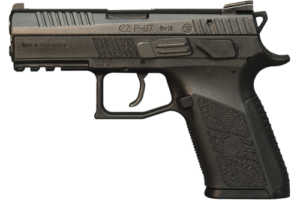 I expected the Bersa to puke as well. Nope. 200 rounds fired (mostly from retention) and the Bersa didn’t have a single malfunction. Who would have expected that the Bersa would outperform the CZ?

The bottom line is that you can’t assume your gun will perform well just because it was made by a company that usually makes quality firearms. You have to push your gun and gear hard in order to really tell if your gun is a “good” one or not.

If you ever attend any formal firearms training classes, bring a backup weapon if you are able to do so.  Ideally, the backup gun would be the same weapon as your primary, but even if you have a completely different setup it will be valuable to have a spare.  Guns break all the time…even guns from quality manufacturers.  If your gun stops working and you don’t have a spare, you will be wasting valuable training time keeping your gun running.  Transitioning to a spare in the event that happens will allow you to spend that time actually getting your money’s worth out of class.

Besides the gun issues, we had some holster issues as well.  It was a cold day at the outdoor range we used.  Temperatures were in the 40s and occasionally we were pelted by sleet.  Consequently all of the students were bundled up.  Reholstering under numerous layers of clothing is a nightmare.  I can’t tell you how many times I saw students trying to force their guns into holsters that were partially obstructed by a jacket or untucked shirt tail.  Don’t do this!

If you get your cover garments stuck in your holster and then force your gun down in with the clothes, the trigger could accidentally be moved to the rear.  The gun will fire and you will have a bullet crease in your ass or leg.  When on the range, look the gun into the holster.  There is no hurry.  If you feel any resistance at all, stop right there and check to see that nothing is blocking the holster mouth.  Don’t get in a hurry to put your gun away.  There’s no winner in a “speed re-holstering” contest.

The only other significant issue I observed was also a holster problem.  One of my students was carrying in the appendix position using a leather IWB holster with a crappy spring steel clip.  About half the time he attempted to draw, the gun came out of his pants with the holster still attached.  That’s a real problem if it happens in a fight.  You may not have time to clear the offending holster and get your gun in action before getting shot.

While it’s possible that they could exist, I have never seen one of those spring steel belt clips work 100% with any holster.  Avoid them like the plague.  A lot of the kydex holster makers offer much better alternatives with clips that do a good job staying attached to the belt.  Spencer Keepers’ “Errand” holster is one good example,  I’ve never had the kydex clip fail on mine.

Before going to any professional shooting class, make sure your guns work and your holsters are adequate.  Don’t waste your time (and the instructor’s time) fighting crappy gear.  If you pick a gun and holster system that is rock solid you will be able to spend more time practicing the skills you paid to learn.