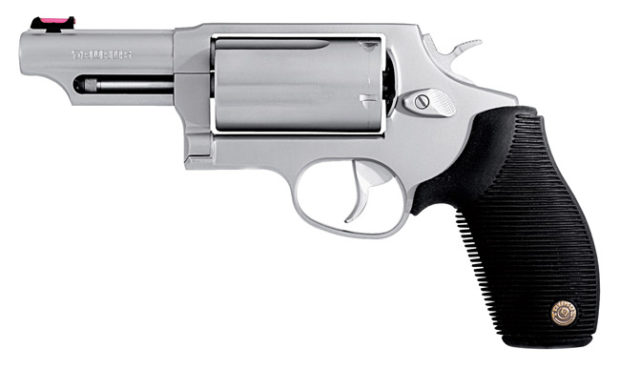 One of my retired officers came to the range to shoot his requalification course a while back. He brought a new toy to play with…the Taurus Judge. This is a pistol that amazingly popular among neophyte gun owners. It’s a five-shot revolver with an alloy frame, fiber optic sights, and a short barrel. It’s chambered for .45 Colt/.410. That’s right.  It’s a pistol that shoots .410 shotgun ammo.

The keyboard commandos and gun store salesmen have been selling these things like crazy for years. Telling potential gun buyers that “you don’t have to aim” and “the shot shells won’t kill the bad guy, just scare him off” are big selling points for the less-informed.

Before shooting my retired friend’s pistol,  I had only fired the Judge a couple of times in .45 Colt.  I got to shoot some .410 rounds out of the new gun.  I wasn’t very impressed.

We were shooting 21/2″ .410 shells loaded with #4 bird shot. The pattern was massive.   At 40 feet the spread exceeded the three by four foot target and only about 15 of the tiny pellets actually hit the human torso silhouette. In order to keep all of the tiny pellets into a human silhouette, I had to be closer than 15 feet.

Just out of curiosity, I fired a couple of CCI .38 special shot shells out of a 6″ .38 revolver. They actually held a much tighter pattern than the Judge at every range. Those of you who have shot .38 shot shells know that they spread fast. Well, the Judge pellets spread even faster!

We fired a few .45 colt loads as well. At 20 feet we were able to shoot a 5 shot rapid fire group that was about 2 inches and centered to point of aim. It’s plenty accurate enough for combat use with the .45 Colt cartridges.

Recoil was about the same for the .45 Colt and the 2.5″ .410 bird shot. It was noticeable, but not bad at all. The big rubber grips help dampen things. I would compare the recoil to a steel frame .38 snub shooting +P loads. The gun seemed typical of Taurus for workmanship and reliability. The gun wasn’t super pretty or well finished, but worked fine. Trigger pull was typical Taurus as well, adequate but rougher than the Smith, Colt, or Ruger.

I didn’t shoot any 3″ shells or any buckshot out of the gun. Effectiveness might be increased with those, but I don’t know by how much.  I certainly wouldn’t rely on it for self defense with the bird shot loads.

Most of you don’t want to kill someone if you don’t have to.  I get that.  But no matter what happens in the armed encounter, you still have to win.  Bird shot will not likely penetrate deeply enough to reach your attacker’s vital organs if you are farther than 10 feet away.  If you don’t get an incapacitation by causing massive blood loss, you are relying on the pain to stop your attacker.  Most criminal attackers are drunk, high, or mentally deranged.  They don’t have the same pain response as “normal” people.  Don’t bet your life on bird shot out of the Judge.

Overall, despite being popular and fun to shoot, I really don’t think I can figure out a very good use for this gun. The bird shot loads are not likely to do much damage to a human attacker. I doubt you could kill small game with it beyond 30 feet. And it’s pretty big to conceal.   Slugs aren’t a very good choice out of this gun.  The ,410 slug only weighs 87 grains (about the same as a .380 round) and is probably moving about 1100 feet per second out of the short barrel.  That’s between .380 acp and 9mm in power.  Not terrible, but not great either.  Good buckshot loads may be  fairly potent, but probably don’t offer any more stopping power than the .45 Colt.   If you want to shoot .45 Colt for a defense round, there are certainly better options out there for that. This gun really doesn’t serve much of a purpose.

Most importantly, this gun is a “one trick pony.”  Its appeal is that it causes wounds that look devastating on targets at extremely close range.  No doubt that this thing would do the job just fine if your attacker was five feet away.  But what happens when you have to shoot someone farther out?  Even more important, what happens if you have to deal with a friend or family member downrange with the suspect?  I’m not talking about a “hostage situation” but instead, the relatively common occasion when a family member is closer to the suspect than you are.  How are you going to take that shot?  With either birdshot or buckshot, you have no control where those rapidly spreading pellets will go.  You can’t take the shot if a loved one is downrange.

No ability to shoot at medium or long ranges?  No ability to shoot when an innocent person is even remotely close to the suspect?  No thanks.  I’ll pick something more versatile for my defensive needs.  You don’t get to choose the circumstances of your defensive shooting encounter.  I want a gun that can perform well no matter what the situation demands.  The Judge doesn’t meet that criteria.

Bottom line….if you have some extra money and want a fun “play” gun, get yourself a Judge. If you want a serious self-defense piece, there are a lot of guns that will do a better job.