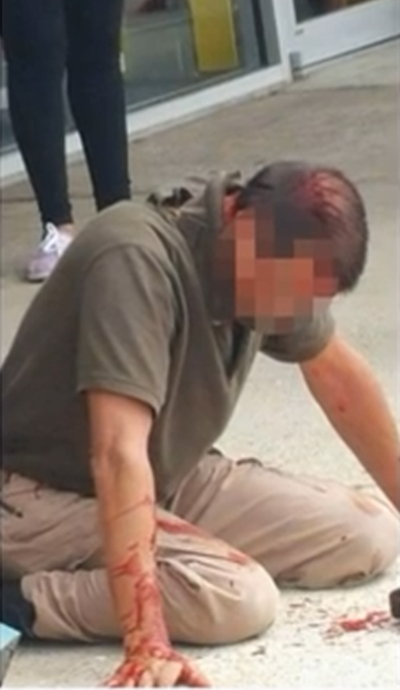 As we see more officers attacked by rioters and more police stations under siege, I’m getting this question more often.  If you want to help a cop under attack, this is how to do it.  And be sure to read PART TWO, how you can help a cop even if you aren’t carrying a weapon. 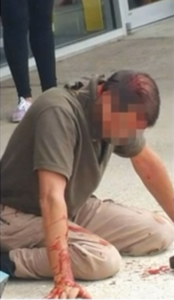 Plain clothes officer after being beaten and pistol whipped by a criminal suspect.

I recently received a very interesting question from a friend and fellow blogger.  He asked the following:

“How should an armed citizen best help a police officer if that officer is under violent attack from another individual or group of individuals?”

It’s a great question.  I think many folks with CCW licenses would be willing to help a cop in trouble.  As a cop, I welcome all the help I can get if I’m in a bad situation.  Three recent incidents (here and here and here) demonstrate examples where armed citizens saved police officers’ lives.

Here are some guidelines for folks who want to help an officer in trouble….

Carry your damn gun!  You can’t easily help a cop in a deadly force scenario without your gun.  In my experience, many CCW licensees don’t regularly carry their firearm.

When I stop a person for a traffic violation, I get an automatic alert if they have a carry permit when I run their license on my in-car computer. If they haven’t informed me that they are carrying a weapon, out of curiosity, I ask them if they are carrying when I re-approach the car.

The most common answer I get when I ask that question is: “Yes, I have a permit, but I’m not carrying my gun right now.”  I would estimate that 75% of the permit holders that I stop for traffic violations aren’t carrying their guns at the time of the stop.

You aren’t likely to help a cop in a gunfight if you aren’t carrying your gun.

As you approach the officer, keep your gun concealed.  You don’t want to be mistaken for another criminal if you are running up on a cop involved in a gunfight or life threatening physical struggle.  If the cop sees you running towards him with a gun in your hand, there’s a good chance that he will assume you are a friend of the criminal he is fighting.  If that happens, you are likely to get shot.

You should also recognize that the cop has likely already called for help on the radio.  A whole bunch of his fellow officers are already on the way to the scene.  One of them might mistake you for the bad guy if they pull up and you have a gun in your hand.

As you are approaching to help the officer, keep your gun in the holster until you’ve decided you need to shoot.

Identify yourself and ask the officer if he needs help.  Here’s the thing that most CCW licensees don’t understand about police confrontations:  most of the time, your gun will only complicate the problem.  Let me explain…

In most of the physical confrontations police officers find themselves in, the criminal is not really trying to kill the officer.  We get in a lot of wrestling matches, but very rarely do we face a criminal who is trying to seriously hurt or kill us.  Most of the criminals that cops are tussling with aren’t really trying to hurt the officer at all.  They are just trying to escape or “save face” in front of their buddies.  They don’t need to be shot.

The problem that you deal with as a rescuer is that you don’t know if the cop is trying to wrestle down a fleeing unarmed shoplifter or is in a life threatening struggle with a cop killer.  If you see a cop struggling with someone during an arrest, the best course of action if to approach, identify yourself as a “good guy” and ask the officer if he needs help.  Saying something like “Officer, I have a concealed carry permit.  Do you need help?” is probably the best thing you can do.  You may have to repeat the request several times to ensure the cop hears it in the struggle.

Your exposed gun is more of a liability than an asset in a physical struggle.  The cop will be worried that the unarmed shoplifter that he’s wrestling with will become armed by taking your gun away from you if you try to inject yourself into the struggle with gun in hand.

If you see someone shooting at a cop, it’s time to draw your gun.  If you see the cop physically struggling with someone, it’s best to ask if he needs help before jumping into the fight.

If you do have to shoot, holster your weapon as soon as the threat is neutralized.  If you decide to help a cop involved in life threatening danger by shooting his attacker, you need to ensure that you aren’t mistakenly shot yourself by the officers (or another armed citizen) coming to help.  Standing over a cop who has been shot with a gun in your hand is a recipe for getting yourself shot by additional responding officers.

Recognize that more police officers are on the way.  Recognize that they will likely be on scene very quickly if one of their coworkers is in trouble.  Make sure you aren’t standing there with gun in hand when they arrive.

If you have to shoot, holster your weapon as soon as you are able to.  Seek cover, from both the bad guy and from responding officers.  Get on the phone to police and ensure that you give dispatchers a good description of yourself so that they can relay that information to responding officers.

When the cops arrive, they will probably order you to the ground, put you in handcuffs, and take your weapon.  Expect that.  Comply with their orders and don’t get indignant.  I know you will be thinking something like “I just saved that officer’s life and his buddies are treating me like a criminal.”  That’s reality.  The responding cops aren’t sure if you are the cop’s guardian angel or the man who just shot him.  They will take precautions by handcuffing you until they figure out what’s going on.  Don’t complicate matters by trying to argue with them.  It will all get sorted out and the cuffs will be removed in a short time.

I stated earlier in the article that, as a cop, I would be eternally grateful for a citizen’s assistance if I was in trouble.  I think most of my co-workers feel the same way.  We appreciate your assistance and we don’t want you to get hurt in the process.  Make sure you take some precautions by following these instructions if you decide to help out a cop in trouble.

Read the follow up article for what to do to help an officer if you are unarmed HERE.